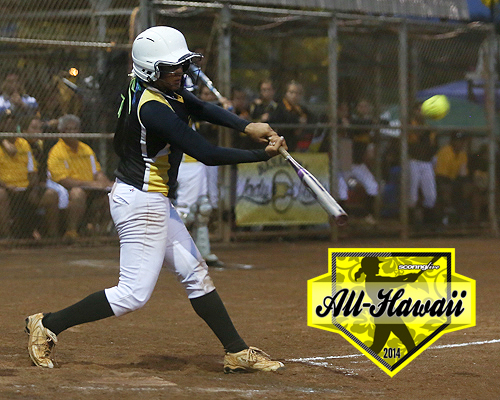 The ScoringLive All-Hawaii Division II Softball team is a selection of some of the best players across the state. Back-to-back state champion Nanakuli headlines the team with Alexis Paulo-Meyers and Ricky Gusman taking Player and Coach of the year honors respectively.

Paulo-Meyers, a senior shortstop, was the epitome of consistency, batting an astronomical .741 to lead the Golden Hawks to their second state title in as many years. She also drove in 49 runs and scored 37 times. Paulo-Meyers also had a knack for the long ball, smashing 11 home runs throughout the course of the year. Such high level of production helped the Golden Hawks average an astonishing 13.8 runs per game.

Joining Paulo-Meyers on the All-Hawaii team as a pitcher is Nanakuli teammate Chyanne Koko. The 5-foot-5 senior pitcher finished the 2014 with an unblemished record of 13-0. Koko pitched seven shutouts and posted a 1.47 ERA for the year. She also struck 68 batters against 19 walks.  Next to Koko as a first team pitcher was Waimea’s Kiana Kamakea, the Kauai Interscholastic Federation player of the year. Kamakea helped lead the Menehunes to the state title game where they eventually fell to the eventual champions.

Earning a spot on the first team as a catcher was Kamehameha-Hawaii’s Kekai Wong Yuen. The sophomore catcher had a postseason to remember, batting a .818 during the state tournament.

Next to Paulo-Meyers in the infield is McKinley first basemen Grace Kapesi, Aiea second basemen Chantelle Shimabukuro and Waimea’s Alyssa Miyamoto. Kapesi was one of the Tiger’s power sources for offense, having batted 0.600 on the year. Shimabukuro was a steady player for ‘Aiea, batting in safely in four state tournament games. Miyamoto was a powerhouse in the KIF all year, knocking in a bevy of homers and triples on the competition.

In the outfield is Nanakuli’s Emma Kaieawa, Waimea’s Taylor Lazaro and Kauai’s Aleigha “Red” Scovel. Kaieawa was a solid contributor to the Golden Hawks’ banner year, batting a .420 with 13 RBIs. Lazaro was a steady player for Waimea and Scovel was the Red Raiders’ top player during the season.

Rounding out the first team as a utility player is Aiea’s Raisa Strom-Okimoto. The 5-foot-3 junior split time as pitcher and shortstop and finished the year with a .613 batting average and a 8-1 record.

Taking home Coach of the Year honors was Coach Gusman out of Nanakuli. Gusman helped his squad complete a perfect season (18-0) with the school’s second state title in a row, their only two in school history. The Golden Hawks also finished as the lone Division II team in the inaugural ScoringLive/OC16 Softball Power Rankings.