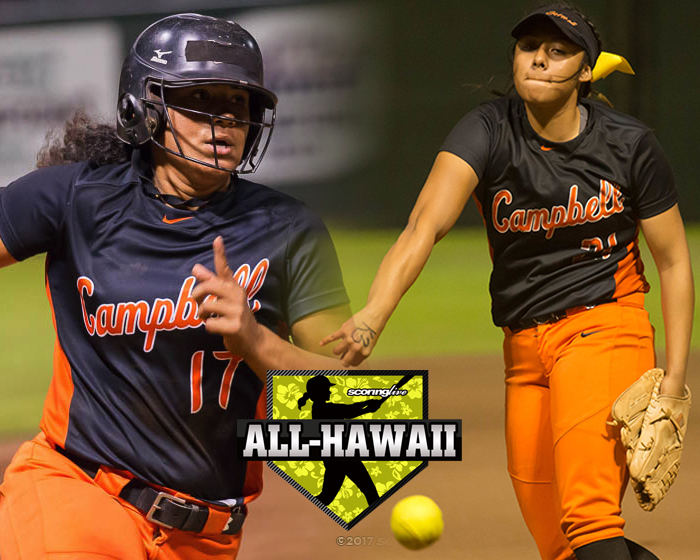 Campbell's Danielle Cervantes was named Pitcher of the Year and her teammate, catcher Jocelyn Alo was named Player of the Year. Head coach Shag Hermosura was named Coach of the Year to complete the sweep of All-Hawaii Division I Softball honors for the Sabers. ScoringLive photo illustration 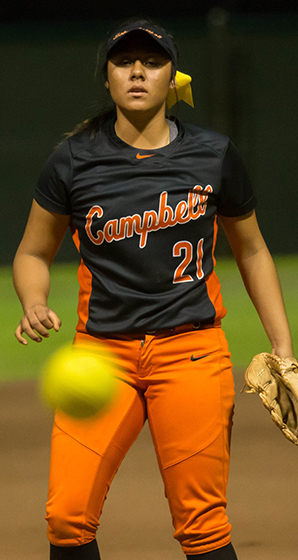 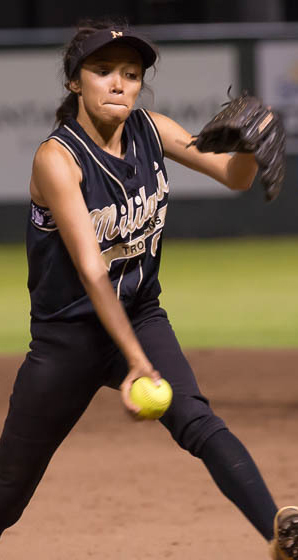 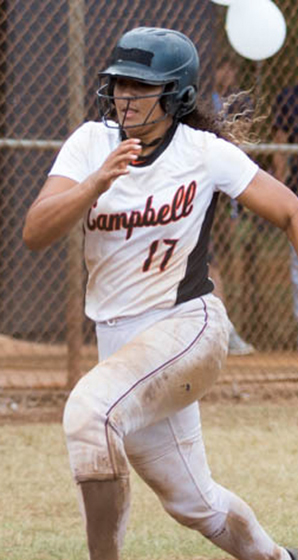 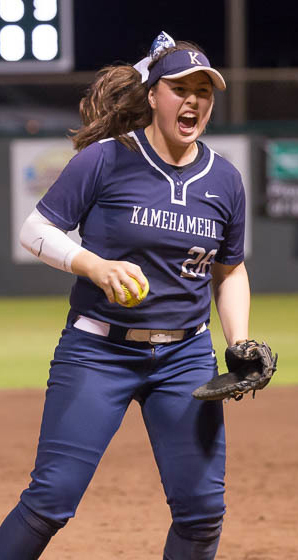 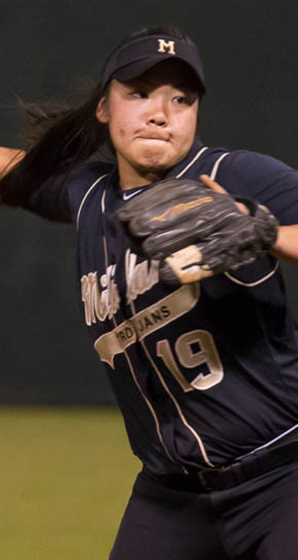 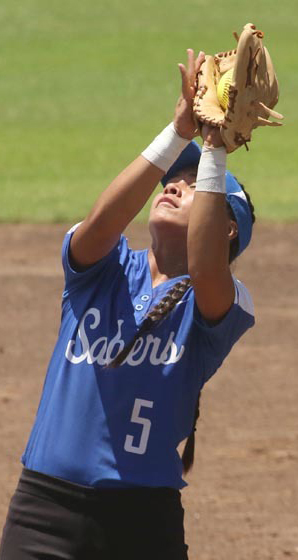 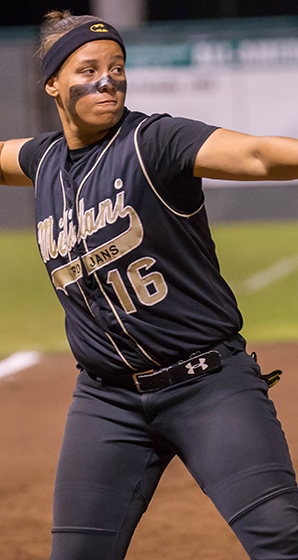 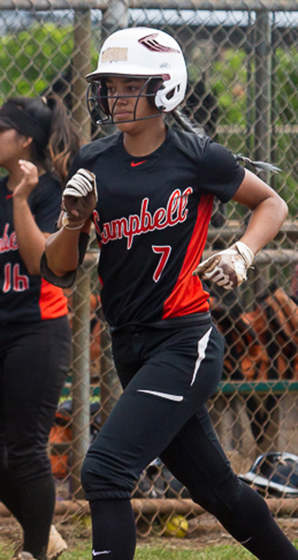 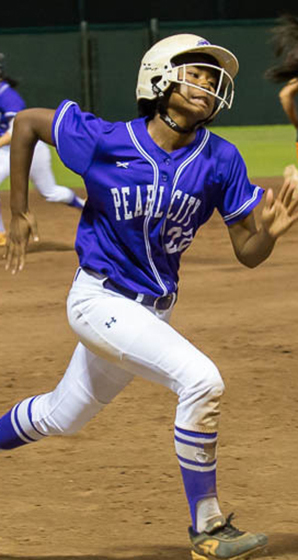 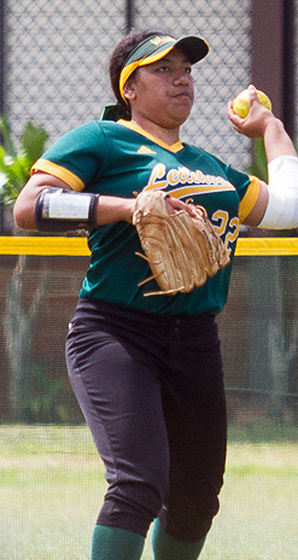 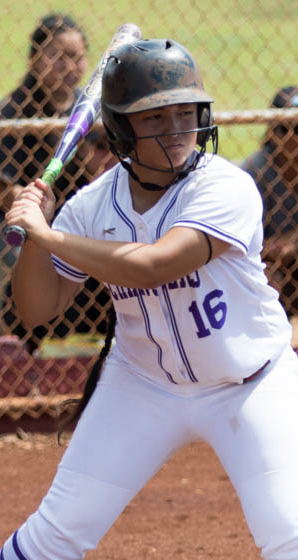 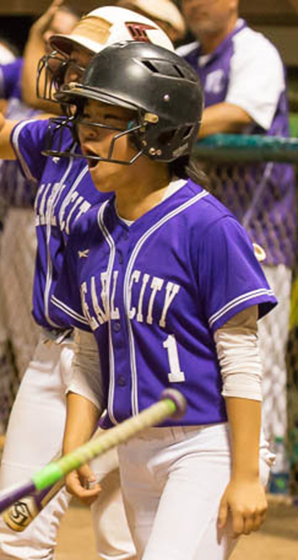 Of Campbell's three consecutive Division I state softball championships, 2017's might have been the least expected.

But powered by their battery – pitcher Danielle Cervantes and catcher Jocelyn Alo – the Sabers pulled off the trifecta.

Unlike their title teams of 2015 and 2016, when their lineups were loaded with seasoned players with a top-down batting order second to none, this year's Sabers had six new players in the lineup filling five field positions, including the entire infield. The sixth lineup spot was the designated player. With the new bats struggling throughout the season, there was no protection for Alo in the batting order and she was consequently walked – intentionally or semi-unintentionally – 46 times during the regular season. Counting preseason, Alo drew 58 walks, which unofficially ranks third in the National Federation record book.

"Just work on your craft; don't worry about the other things," Campbell coach Michael Hermosura told his pitcher. "'They will come together. If you're bothered by that, you cannot work your craft.' She understood. We didn't hit as well as we did the last couple years, but it came from different people at certain times. They (eventually) clutched up."

Cervantes responded with a 13-4 record and an earned run average of 1.05. In 106 2/3 innings pitched, she allowed 57 hits and struck out 140 and walked 26, a 5.4-1 ratio, the best among pitchers with at least 80 innings pitched. She had 13 complete games and tossed four shutouts, three of them no-hitters (one was combined with Jade Behic).

But she saved one of her best outings for last. Cervantes fired a one-hitter to silence Mililani, 2-0, in the state title game. About three weeks earlier, the Trojans touched up Cervantes for a season-high five runs in the 5-4 loss.

Like most successful players, Cervantes' achievements came from a dedicated work ethic.

"She did everything to get bigger, stronger and better," Hermosura said. "She worked hard in the weight room, every other day she was (running) three miles, did a lot of abs (abdominal work), 400, 500, 600 abs, sometimes a thousand in spurts. She did her wind sprints to help with her explosion."

Alo was very familiar to Campbell even before she enrolled at the Ewa Beach campus her junior year. As a freshman playing for Kahuku, the right-handed hitting Alo smashed a solo homer in a 17-1 loss to the Sabers in the first round of the OIA playoffs in 2014. Alo, who was OIA East Co-Player of the Year as a freshman and a second team All-Hawaii selection at catcher.

Her sophomore season was virtually overlooked at Kahuku played in Division II. She still was an OIA D2 second-team selection at third base.

When she arrived at Campbell, coaches and players knew of Alo's past and the potential she could bring to an already solid program. Her acceptance came not with her accolades, but how she worked.

"We all knew what she did (at Kahuku)," Hermosura said. "We didn't know how she would come out to our program. But she made an impact by just working hard at practice, showing the team that she can do something for the program. Just her work habits, her mannerisms, work habits on the field (and) off the field in the weight room. The kids began to follow, follow, follow."

This past season was a different story. With virtually no protection in the lineup, Alo was walked 46 times. There was a reason no one wanted anything to do with her. When pitched to, she hit .414 with four doubles, five homers and 11 RBI.

More surprises? At times, she would bat left-handed at practice.

"She was taking them deep, too," Hermosura said. "She's just an awesome athlete."

Alo's value was not just as an offensive threat.

Both Cervantes and Alo will continue their softball careers in college. Cervantes will pitch at the Hawaii-Hilo and Alo will play for defending national champion Oklahoma.

Hermosura had to tinker with his lineup throughout the season with Alo being walked continually. His teams were always within striking range; their widest deficit all season was two runs.