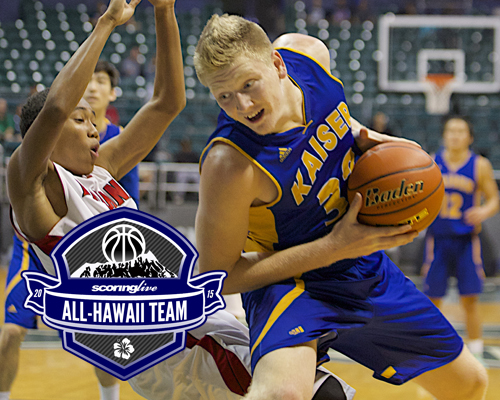 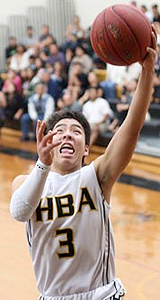 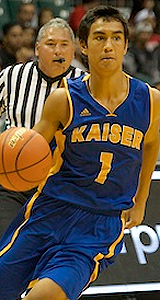 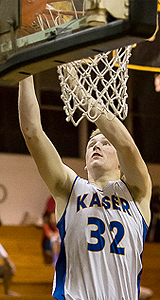 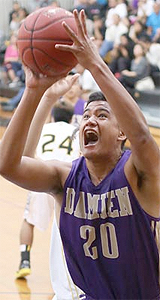 Every team that played Kaiser knew that they needed to slow down Chance Kalaugher if they wanted a chance to win. The junior forward was the motor behind the Cougars' state title run and was selected as by the ScoringLive staff as the All-Hawaii Division II Boys Basketball Player of the Year.

The 6-foot-5 Kalaugher led Kaiser to a 24-8 overall record, including a 7-4 mark in the Oahu Interscholastic Association Eastern Division. He was also the only junior selected to the First Team of the league all-stars.

"He's the leader of the team," said Kailua coach Wally Marciel. "He's a beast in the post. When we played Kaiser our goal was to try to keep him off the blocks and get him in foul trouble. He had that much of an impact."

"Chance is an animal," said Damien coach Alvin Stephenson. "You just look at him and he's a physical specimen that makes you pay attention to him a lot. When we faced Kaiser, I had the hardest time trying to come up with a defensive scheme because you can't really stop him."

The biggest area of his game that Kalaugher improved on was his maturity on the court. By being more disciplined on defense, the junior forward was able to remain on the floor in critical situations.

"He had to think how to stay eligible in the game," Marciel said. "Before he would try to block every single shot and get into foul trouble and get frustrated. The past two years he would get ticked off on every foul, but this year he would just shake his head and move on.

"He was a different player this year that's for sure. He was a little more patient, not forcing as much. I think that's what made him so successful this season."

Mahiko, a 6-foot-2 junior swingman, averaged 13.8 points and 7.8 rebounds in his first season as a varsity player. With most of the Cougars' core players returning from a year ago, Mahiko was arguably the missing piece that Kaiser needed to win a state title.

"I don't think Kaiser goes as far as they did without him blossoming into a better around player," said Kalani coach Nathan Davis. "Coming up he was just labeled as a shooter, but he's actually a physical player. He likes body contact and turned out to be a decent ball handler."

Mahiko saved his best performance for last, scoring a season-high 24 points against Kalani in the Division II championship game. During the state tourney he averaged 18.7 points per game and was named the tournament's most outstanding player.

"He has a lot of confidence in himself," said Kohala coach Don Fernandez. "If he has one bad play, he forgets about it. He's an aggressive player and he has strong belief in his ability. He just keeps attacking, being aggressive and doesn't shy away from the moment."

Saito, a 5-foot-9 senior, led Pahoa to a 13-1 mark in the Big Island Interscholastic Federation and the team's first league title since 2011. In 12 regular season games he averaged 27.8 points, 10.9 rebounds, 6.9 assists and 7.4 steals per game. He recorded a handful of triple doubles during the year and converted on 91 percent of his free throw attempts (94-for-103).

"He's a scoring machine," said Fernandez. "Everything goes through him. He plays the point and gets everything running. If you kind of forget about him shooting wise, he knocks them down."

The Daggers were the top-seeded team in the Division II state tourney, falling to Kalani in the opening round, 57-52. Saito averaged 22.6 points during the three-day tournament.

"I think he's very poised," said Davis. "You can tell he's the coach's son. He doesn't get rattled. All of his moves looked very under control and he made some difficult shots looked pretty easy."

Hosaka, a 5-foot-8 senior, led Hawaii Baptist to a 10-2 mark in the Interscholastic League of Honolulu Division II and the league crown. He averaged 21.5 points per game on the year and was selected as the league's most valuable player.

"BJ was phenomenal this year," said Stephenson. "He's one of those guys that gives you everything he had. Everything he has accomplished was well deserved when you see the hard work that he put in for his senior year."

Hosaka solidified his standing as one of the top shooters in the state after winning the 3-point shooting contest in the Geremy Robinson Senior Classic. Nearly every team that faced Hawaii Baptist made sure that they had someone shadowing Hosaka at all times.

"He can shoot," said Fernandez. "He shoots tough shots. Even though he has guys in his face and everything, he can hit it. He uses his body well to protect the ball from defenders. He plays tough and smart ball."

King, a 6-foot-6 senior, rounds out the First Team. He averaged 13.2 points and 12.5 rebounds per game this year. King's presence in the paint helped the injury-riddled Monarchs to a second straight state tournament appearance.

"Kapiina is a load in there," said Hawaii Baptist George Weeks. "He's a big kid and he creates issues for any team that plays against him. He's difficult for any team to deal with because of his size and physicality."

Kaiser coach Branden Kawazoe took home the Division II Coach of the Year award for the second consecutive year. In his second year at the helm the Cougars claimed back-to-back league titles and their first state crown in school history. Kaiser also picked up a handful of wins against Division I teams in the regular season, including a 58-48 victory over eventual OIA Division I champion Farrington.

"He turned the program around," said Marciel. "He's got the team playing very well. They've been a winning program since he got there the last year. They beat some good teams in Division I this year. The team plays together, they're not individuals. They share the ball and there's no selfishness out there. That's a tribute to Branden and his coaching staff."

The Cougars' run to the state title wasn't without some late game drama however. All of Kaiser's victories in the state tournament were decided by four points or less.

"I think he did a great job corralling his team," said Fernandez. "When we made runs against them, he had his team solid the whole time, not panicking. They sold everybody at their positions. Everyone knew their role and believed in it."