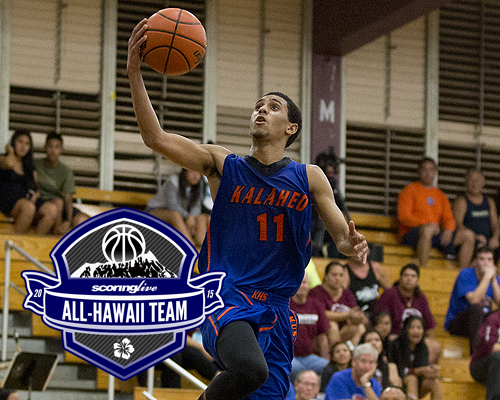 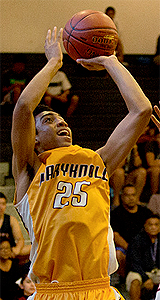 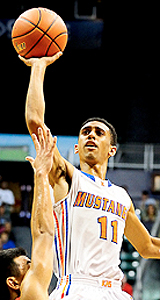 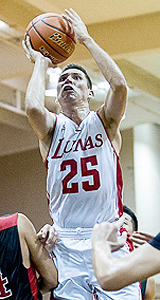 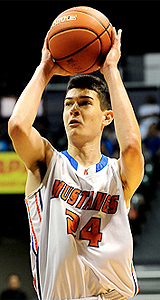 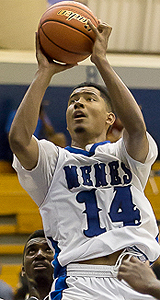 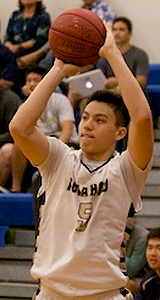 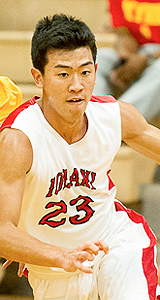 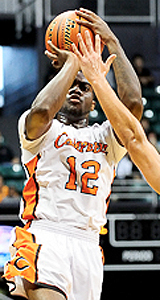 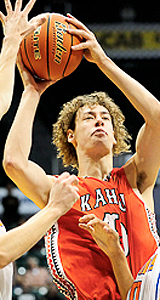 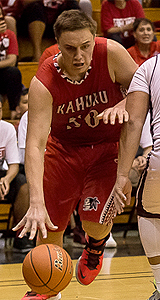 In the biggest game of the season, Kaleb Gilmore came through with his best performance.

The Kalaheo senior guard, who scored a season-high 30 points in the state championship final, was selected by the ScoringLive staff as the All-Hawaii Division I Boys Basketball Player of the Year.

Gilmore, a 6-foot speedster, was a First Team selection as a Maryknoll junior last year. He is joined on this year's First Team by his Kalaheo teammate, Kupaa Harrison, Maryknoll's Justice Sueing Jr., Lahainaluna's Josh Chapital and Moanalua's Kyrie McRaven.

The Mustangs went 31-3 overall, including a 13-1 mark in the Oahu Interscholastic Association, this season, which culminated with their 19th league title and sixth state championship in school history. It was the second time in three seasons that they won both the OIA and state Division I crowns.

Gilmore averaged a team-best 18.9 points per game, which ranked him fourth in Division I. He eclipsed the 20-point mark in 14 times in the season, including eight of Kalaheo's final nine games.

"Kaleb is a super athlete," Kailua coach Wally Marciel said of Gilmore. "He's got a quick shot, he's super quick, he's a good penetrator and overall he's just a great player. He had a wonderful season at Kalaheo, but what impressed me most was that he was a true leader on the court."

In four state-tournament games, Gilmore averaged 20.3 points and 2.8 steals per game. He shot 40 of 44 from the free-throw line (90.9 percent) for the tournament. In addition to earning OIA East Player of the Year honors, Gilmore was also named Most Outstanding Player in the state tournament.

"I told our guys that we had to guard him to 25 feet and at first, they didn't believe me and he hit a couple of shots from about 27 feet, but if you step out on him he's so quick to get to the hoop," Roosevelt coach Steve Hathaway said. "He's the toughest guy to cover in the whole state and in that state final he pretty much did what he wanted.

Gilmore shot just 5 of 11 from the field against Iolani in the state championship game, but he was 2 of 3 from beyond the arc and tied the state-tournament record by hitting 18 of his 20 free-throw attempts.

"He's the best scoring guard in the state," Iolani coach Dean Shimamoto said of Gilmore. "Anytime you're playing against him you're always worried because even if you play him right, he can still get off a shot and if you try to deny him, he can still get the ball. He's quick in transition, he can get to the bucket and finish or draw fouls and he makes his free throws at the end of the game, so it's hard to stop him."

Both Marciel and Hathaway agreed that Gilmore was missing piece to the puzzle that brought the state title back to Kalaheo.

"When I was coaching at (Academy of the Pacific) and we played against him as a freshman he was young, but still very athletic, but since then you've seen his confidence level grow and that's a big difference along with his leadership," Marciel said. "Of course, Kalaheo had a leader already with (Harrison) there, but with both of those guys there they could feed off of each other and that made them a tough team to beat."

"I think everyone knew they were going to be the team to beat this year, but I think if you take out either (Gilmore or Harrison) and (Kalaheo) doesn't win the state championship this year," Hathaway said. "They complement each other well and are a nice 1-2 punch."

Harrison, a 6-foot-5 senior, averaged 13.8 points per game. He scored 19 points in a state first-round game against Maui and matched that mark against Kahuku in a semifinal-round win that saw Gilmore manage just four points.

"Kaleb was a huge part of Kalaheo's success as a scorer, but I think Kupaa was just as important to that team," Shimamoto said. "I think Kupaa made Kaleb better and Kaleb made Kupaa better, but when you have a 6-5 guy who can make the outside shot, grab rebounds and bring the ball up, that's a matchup problem."

Harrison scored just one point in the state final, but grabbed a game-high 16 rebounds to go with five assists and a steal. He averaged 12.8 points, 9.0 rebounds, 3.5 steals and 2.3 assists at states and joined Gilmore on the All-Tournament Team.

"He's a tough all-around player and he has been for the last couple of years," Hathaway said of Harrison. "He sacrificed some of his scoring this year for Gilmore, but he elevated the team in other ways. He's a tough kid to guard if you don't have a 6-4 kid of your own that can play inside and out. When Gilmore got in foul trouble in that (quarterfinal game) against Punahou, Kupaa took control of that team."

Sueing, a 6-foot-5 sophomore swingman, averaged 19.9 points per game to lead all of Division I. He helped Maryknoll to a 12-10 overall record and 6-6 mark in the ILH.

"What a phenomenal player," Marciel said of Sueing. "He can shoot the ball from the outside, he can penetrate and get to the bucket and he's a good post-up player. Thank God I don't have to face him twice a season for the next few years."

Shimamoto had high praise for Sueing, who totaled 59 points in three games against Iolani this season, including 25 in a two-point Maryknoll loss back on Jan. 20.

"I think he has the most potential of anybody in the state," Shimamoto said. "I think Justice can be one of the better guys out of the state of Hawaii in quite a few years, actually. He's 6-5, he can shoot it, he has good handles, he's long and he has a good demeanor. He's pretty mature for being just a sophomore."

Sueing scored a season-high 27 points in a win over Kamehameha on Feb. 4 and was held below double-digits scoring just once this season. For the year, he shot 78.4 percent from the free-throw line.

Chapital, a 6-foot senior guard, averaged 14.5 points per game and was second in all of Division I in made 3-pointers (39). He scored a season-high 28 points in a regular-season win over Maui on Jan. 24 and averaged 15.3 points in three state-tournament games.

"He was one of their top 3-point shooters and when their other guards were having trouble, Chapital brought the ball down the court in starting the offense," Baldwin coach Wayne Gushiken said of Chapital, who was named to the All-Maui Interscholastic League First Team. "He's a good defensive player, too."

The Lunas went 26-3 on the year, including a perfect 14-0 mark league play. They went 2-1 in the state tournament, with their only loss coming to Iolani. In the fifth-place game, Chapital scored a game-high 23 points and grabbed seven rebounds, in a 59-54 win over top-seeded Punahou.

McRaven, a 6-foot-5 senior center, averaged 16.5 points per game. He paced Moanalua to a 16-14 overall record and 8-7 mark in the OIA. After an offseason transfer from Mid-Pacific, McRaven got off to a slow start this year, but finished strong in the state tournament, where he averaged 19.0 points, 12.3 rebounds and 2.3 blocks per game.

"That kid is tough," Hathaway said of McRaven. "He's got a great first step, some great moves for a big man. He jumps well and big guys don't always jump well, but he also times his jump well and controls his body well. He'll make you think he's going to shoot the 15-footer, but he will get by you and he's quick to the hoop."

Campbell's Wyatt Tau was selected as Coach of the Year after guiding his team to its second consecutive state semifinal appearance and a third-place finish this year.

"He did a great job with that team and putting that group together," Marciel said of Tau. "I was totally impressed with Campbell's defense in the state tournament. They slowed the ball down a lot in states, which is different than Wyatt's teams from before where they would take it up and down the court, so he adapted and I think that gave Campbell better chances to win at the end of games."

The Sabers finished second in the OIA West and posted an 11-2 league mark and 19-8 overall record this season. They won their first seven in-division games and recovered from a quarterfinal-round loss in the OIA tournament to win five of their final six games on the year.

"I have a lot of respect for coach Wyatt. He didn't have a ton of talent, but he does great things with the guys he has and the kids are good kids, they're respectful, they play with good sportsmanship and they play hard," Shimamoto said. "I thought he got the most out of what he had and they gave us all we could handle this year."

If not for a two-point loss to Shimamoto's Iolani squad in the state semifinals, the Sabers would have been playing for the state championship.

"I didn't think his team had a whole lot of talent coming into the year and I wasn't expecting them to be that good to make a run in the state tournament his year, but they got better and better throughout the year," Hathaway said. "He did a great job and it was a nice run for Campbell. He's definitely deserving of being the Coach of the Year."