Football
Mules, Tokuda gained much from heartache of 2012 season 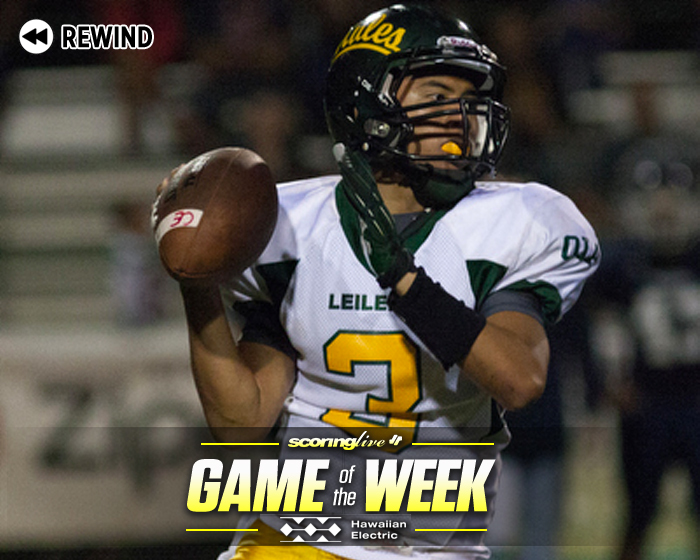 When it comes to the 2012 prep football season, former Leilehua coach Nolan Tokuda is candid with his recollection of it.

"That season was disappointing, I think, for us," said Tokuda, who compiled an 89-50 coaching record in 12 seasons leading the Mules.

Leilehua's only state championship, in 2007, came under Tokuda. That was also the start of the Mules' run of five straight years of state semifinal-round appearances (returned to title game in 2008; lost to Punahou).

The Mules went 7-4 overall and 4-2 in the OIA Red West. They were edged by Kahuku, 14-7, in the league Division I tournament and then sent home with a season-ending 52-26 loss to Farrington in the third-place game.

"That year we spent a lot of time in the early-season training getting to know each other — we had a couple of kids transfer in that year — but sometimes with chemistry, off the field it's good, but when you get on the field it's a little different," said Tokuda, who took a one-year sabbatical during the 2011 season following the birth of his daughter, Taytum.

The Mules went 10-2-1 that year, when then-defensive coordinator served as interim coach. Their only losses came against Kahuku, by a combined five points.

"Sometimes when you set too many expectations for the kids, you push them a little bit too much, when you should just want them to enjoy themselves instead because why do kids play football?," he asked. "Because they want to have fun, so let the kids have fun and that was a reminder that season.

"That's the disappointing thing, we had a good team and there's no one to blame but myself as the head coach. That was a team that should have gone to the state tournament and probably should have got back to the semis," Tokuda lamented. 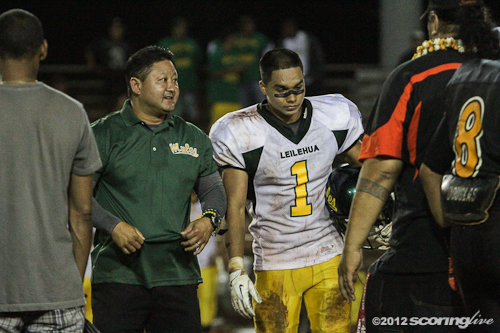 Tokuda is also candid about the self-reflection that the premature end to the 2012 season forced him to do.

"The takeaway was that a lot of times the coaches get in the way — that was me — that was my takeaway," he said. "That was the first year after I had my baby in 2011, when coach Kurisu took over the team, and I came back in 2012."

With Tokuda was out, the offensive play-calling was handled by Al Viloria. Leilehua averaged better than 31 points that season, which provided Tokuda with enough reassurance to leave things be — well, mostly.

"Prior to that I was calling the plays on offense and special teams from the time I became a head coach and to come back and have a season off and not coach, I became a control freak and tried to control everything," he admitted.

Although Tokuda reflects upon the season with disappointment — mostly with himself — there were a few moments that he remains proud of.

"When you look at it, we beat some pretty good teams that year: Mililani, Waianae, Campbell, but I guess the loss to Aiea really put a damper on things," said Tokuda, a 1990 Aiea graduate.

Conversely, for Na Alii, it was their only in-division win that season.

The Mules rebounded, however, with a 47-0 rout of Kapolei the following week. They then fell short in a 35-34 overtime loss to Campbell, before pulling out a 27-26 win in OT over Waipahu a week later.

Part of working through the ups-and-downs of the season was getting first-year players to jell with the rest of their teammates.

"We had a couple of kids that transferred from Campbell, the Piceno family — Keoni and Ikaika — and we had Levi Castanares, from Mililani, so for the chemistry we did what we could with new guys coming in and trying to fit with the veterans," Tokuda said.

Entering the final week of the regular season, Leilehua and Waianae carried identical 3-2 league records and were set to face-off on a Saturday night in Wahiawa. The stakes were high, as the winner would claim second place behind Mililani and a first-round bye in the 12-team OIA tournament.

"As a coaching staff, of course we're going to say that getting the second seed would be to to our advantage, but to the kids we don't want to talk about seeding or winning — because that was our achilles' heel all year — so we just decided to talk about executing," Tokuda said of the lead-up to the game against the Seariders.

"We said, ‘Just trust the guy next to you, trust us, as coaches, and throw the term ‘winning' out the door.' " 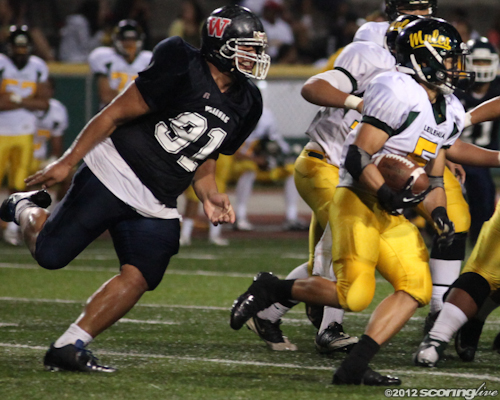 There was one, very big thing that the Mules did have to acknowledge, however, in 6-foot-2, 290-pound defensive lineman Kennedy Tulimasealii.

"For this game, we could not block Kennedy, so what we decided to do was just read him and wherever he is, call a zone play and we don't touch him and we block everybody else — because there's no sense in blocking him," Tokuda said of Tulimasealii, who was selected by Red West coaches as league Defensive Player of the Year.

"You can put two guys over there and you still can't block him, so instead of blocking him, we just blocked everybody else and you end up with him running for the ball. He got some hits on our quarterback, but we'd throw screens to the right, screen to the left, go hard count, line-up quick — just try to get him tired and get him out of the gameplan."

More on how that went later.

A crowd of about 2,000 at Hugh Yoshida Stadium saw the sixth-ranked Mules get off to an opportunistic against the eighth-ranked Seariders.

Waianae fumbled the return of the game's opening kickoff and Roger Taman recovered the loose ball for the home team, who recycled the turnover into a 10-play scoring drive, capped by Ikaika Piceno's 1-yard touchdown run.

The Seariders answered with scores on each of their first two offensive possessions — both highlighted by short Jemery Willes' TD runs — to take a 14-7 lead in the second quarter.

Leilehua tied it at 14-all on a 13-yard scoring strike from quarterback Justin Jenks to defensive back-turned-wide receiver Shai Pulawa, who was filling in on the offensive side of the ball that week for starter Josh Jenks, who was injured in the win over Waipahu a week prior.

"(Pulawa) was a two-player in JV, a great player, and when he came up (to varsity) his sophomore and junior years, they took him on defense," Tokuda said of Pulawa, who went on to play collegiately at Whitworth.

"He played corner and safety, but when Josh wasn't able to play, we knew that Shai knows the offense so we moved him over. He's a good athlete, good attitude and whether it's catching the ball or running his man off, he'll do all those things. That's the reason he went to play in college, he had the right attitude."

Waianae reclaimed the lead briefly following a 50-yard TD run by Alakai Kealoha, but Leilehua stole back the momentum with a couple of quick scores before halftime.

Justin Jenks found Tristin Kamaka for an 11-yard TD pass with 2:41 left on the clock and after Sione Haunga recovered the ensuing onside kickoff to give his team the ball back at the Seariders' 32-yard line, Jenks hooked up with Conrad Supnet on a 16-yard scoring strike five plays later.

Beti Alex's pass to Keanu Kamakaiwi on the ensuing two-point conversion gave the Mules a 29-20 lead at the break.

"Every week he always looks for opportunities where we can get the ball back, whether it's an onside kick, fake punt, going for two — if it's there, he'll let us know," Tokuda said. "He's good at that and he's a great guy. He prepares himself well, he prepares his kids well. He made the call and he made the right call."

Waianae cut the Leilehua lead to 29-27 after a third Willes' TD run early in the third quarter.

The Mules got some breathing room when defensive lineman Robert McCarthy picked up a Searider fumble and returned it five yards for a touchdown.

"The neat thing about (McCarthy) is I don't think he played JV — he might have, but was a reserve guy — but he didn't play his junior year because he hurt his neck and his senior year he came to us and decided he was gonna work out hard," Tokuda said of the 6-foot-3, 200-pound McCarthy.

"I remember coach Kurisu asked if I had talked to Robert because he wants to be a doctor and he's got over a 4.0 GPA, but he hasn't looked at schools yet, or scholarships, he didn't take his SAT, so we got him going on all that."

Tokuda said McCarthy went on to college to pursue pre-med.

"He's a smart kid. Did everything you asked. He was a ‘yes-sir,' with-a-smile kind of kid. He reminded me of an Abercrombie and Fitch model at 6-2; Great smile, great personality. Good-looking kid."

McCarthy's scoop-and-score proved to be the insurance that Leilehua needed. Waianae hit on a big play with an 80-yard TD pass from quarterback Kekoa Kaluhiokalani to wide receiver Pookela Nakamoto.

"That is the heartbreaking one when I look at the box score," Tokuda said. "We could have put it away. They probably had the ball on the 20 and they just aired it out and they hit. With a lead like that, you make sure your safeties are over the top."

Leilehua was forced to punt away on its next drive. Waianae drove down to the Mules' 23-yard line before it attempted a potential game-winning field goal. However, the 40-yard kick fell short and Leilehua was able to run out the clock.

The Seariders finished with 299 yards of total offense to Leilehua's 183.

As for Tulimasealii? The standout defensive lineman finished with four sacks, one forced fumble and at least three batted passes at the line of scrimmage. 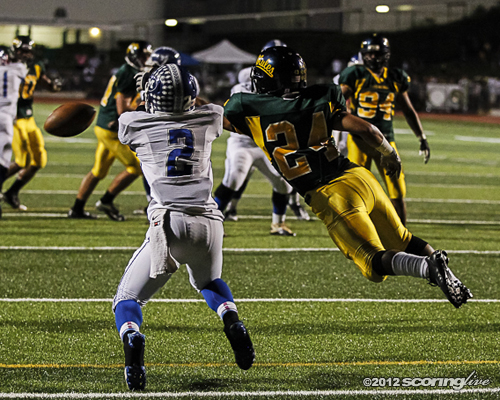 The Mules finished second in the Red West final standings and drew a first-round bye in the OIA tournament. They defeated Red East No. 3 seed Moanalua, 29-3, in the quarterfinal round behind a four-takeaway effort from their defense, but saw their season come to a close with back-to-back losses to Kahuku and Farrington the next two weekend.

After a five-year drought, Leilehua returned to the Division I state tournament in 2016 — the first year of the current three-tier system — and reached the semifinal round before falling to eventual-champion Mililani, 51-35.

Tokuda retired from coaching following that season and the next summer, took over at athletic director at the school.