Hawaiian Electric Game of the Week
Castle to host No. 5 Roosevelt in meeting of 2-0 teams in OIA D1 East 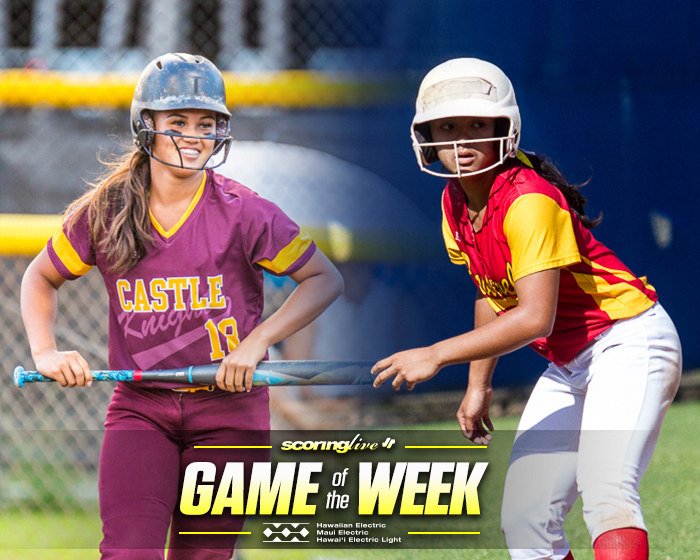 Dayzee Wong (left) and the Knights will take on Hoku Ching (right) and the Rough Riders when the teams face-off Saturday afternoon. ScoringLive photo illustration

It's a little bit of a tight squeeze in the Castle softball dugout these days.

For longtime coach Jon Berinobis, however, that's a good problem to have.

"We have 17 (players) this year," Berinobis said with a chuckle, after all, it was only a handful of seasons ago that the Knights were consistently short-handed and even forfeited several games as a result.

Berinobis said the roster was bolstered with a number of sophomores that decided to tryout for the varsity team this spring. Many of them had just picked up the sport as freshmen last year and had just completed their second JV season in the winter.

"They decided to come out and with the numbers that we have on our side, I decided to keep them and see if they can learn the game and so far they've been sticking around, but that's the future," Berinobis said.

It's a young roster, for sure. Castle graduated a large senior class in 2019 and has just two seniors this year, including shortstop Dayzee Wong.

Wong is batting .625 (5 for 8) through the Knights' first two games regular-season games. She went 3 for 5 with a home run, drove in two runs and scored twice in a 12-4 win at Moanalua Tuesday.

"She's been playing some good defense for us at short and been providing us with some offense, so she's one of our brighter spots," Berinobis said.

"They've been solidifying our defense and also providing a lot of offense for us," Berinobis added.

A lot of offense, indeed.

The Knights (2-0) have scored 28 total runs on 22 hits in their two games thus far in OIA Division I East play. They opened the year with a five-inning, mercy-rule win over Kaimuki, 16-6.

Berinobis said the team's participation in the preseason Trojans Softball Classic has served it well.

"A lot of our players don't play in that winter league and we didn't enter the Maryknoll tournament, so the Mililani tournament was our first real test to play and I thought we did real good. We played for the consolation championship, but the game experience was really good," Berinobis said. "We were fortunate to get eight games in so my pitchers got some work and we saw what they can do, but there was a lot of positive stuff coming out of it to take into the season, so now we'll see how far we can take this."

"She's gonna try and carry us this season so we're trying to keep her healthy, but mostly we're trying to get her to learn how to be more of a pitcher instead of a thrower," Berinobis said. "So she's starting to realize that and doing the things a pitcher needs to do to keep us in the game, but it's a learning process and game-by-game she'll learn how to use her head a little more and not always try to throw things by batters, because that's impossible."

Although a large portion of the team is brand new to the varsity level, the quartet of Lopes, Josue, Lauren Kong and Brianne McCabe are into their third season on the team.

Castle will face its toughest test to-date — and perhaps its last for the foreseeable future — when it plays host to fellow-unbeaten Roosevelt Saturday afternoon.

Hurricanes open the season at No. 1 in the first @HwnElectric Softball Power Rankings of the Year. pic.twitter.com/ffAwnYwius

The Rough Riders (2-0), who are ranked fifth in the ScoringLive/Hawaiian Electric Power Rankings, are tied atop the OIA D1 East standings with the Knights and Kaiser Cougars.

"Roosevelt and us, we always seem to have a good ball game here," said Berinobis, who enjoys a long-running friendship with Rough Riders coach Clay Okamura.

"He's been coming out with some really good ball players — good pitching, good hitting, good defense — and I know he lost a bunch of them, but every year he comes out with some girls that just play ball. His numbers are a little low, but he's still got what he needs to compete," Berinobis said. "It's gonna be a tough one for us, it's always tough when we gotta face Roosevelt."

The Rough Riders saw nine seniors complete their eligibility last spring. That figure is nearly as large as the entire roster (10) this season.

Among the production they will seek to replace are First Team All-Hawaii picks Jaeda Cabunoc and Maya Nakamura. Cabunoc, a three-year starter at pitcher, was the All-OIA D1 East Player of the Year in 2019.

Junior Sunny Halsey takes over as Cabunoc's successor this season. She has pitched every inning so far for Roosevelt and is 2-0 with a 0.64 ERA. Halsey has struck out 12 and walked four in 11.0 innings and allowed one run on three hits. She struck out eight and walked one in a 12-0 win over Kaimuki in five innings.

"She's doing very good," Okamura said. "They all put in a lot of work in the offseason, they all do."

Both of Roosevelt's wins so far has been blowouts. They recorded 12 hits in a 12-1 win over Kalani in six innings Thursday afternoon.

Senior outfielder Angel "Hoku" Ching is leading the way with her .571 batting average (4 for 7). She belted a pair of home runs against the Falcons and is tied for the state lead with three dingers on the year. Ching earned Second Team All-Hawaii honors last year and was a first team all-league pick along with fellow-returnees Kanilehua Pitoy and Tiani "Boom" Sniffen.

Okamura, always brief with his words, said that the collective experience the group has "helps a lot."

For Okamura, the work-in-progress this year brings surely beats out the perspective he had a year ago, when a length hospitalization forced him to miss the softball season.

"It's going well," he stated of his return to the program. "Yeah, it's okay."

Berinobis will be happy to see his old friend across the diamond Saturday.

"I'm glad to see him back on the field. I'm sure it's just a little more difficult for him now, but he's just always about helping the kids," Berinobis said. "Everybody sees Clay with what he does on the field and that's because he's so passionate about the game and he gets into the game, but he's really just a super, super guy."

First pitch between the Rough Riders and Knights is scheduled for 3 p.m. at Castle.

Saturday's game will be amongst the last games to take place before all interscholastic competition is suspended effective Monday. The announcement was made by the HHSAA, in conjunction with all of its member leagues, via emailed press release Friday afternoon.

"The priority of the HHSAA continues to be the health and safety of our student-athletes, coaches, administrators and members of the community," HHSAA Executive Director Chris Chun said. "We hope that play can resume before the school year ends, but must be mindful not to jeopardize the health of our community in doing so. This decision was not made lightly and is supported unanimously by our member leagues."

No resumption of play will take place without the HHSAA's consultation with the Hawaii State Department of Health and the Lt. Governor's office. The HHSAA will continue to evaluate the COVID-19 situation that has brought much of the sports world to a halt since Wednesday.