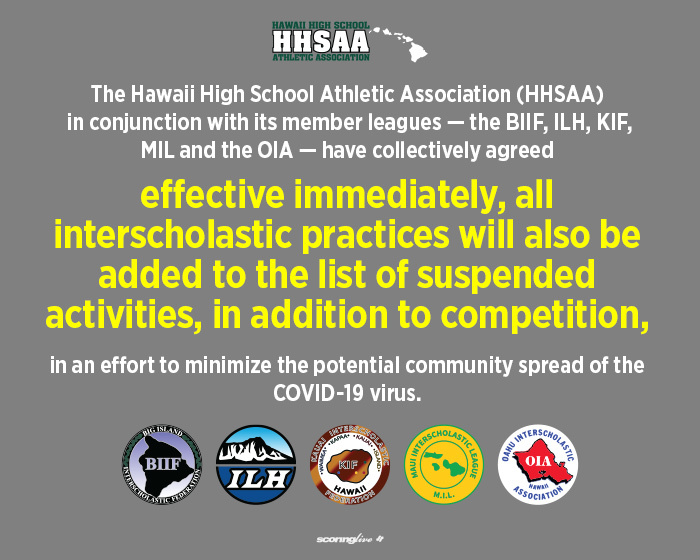 The HHSAA announced Monday, March 16 that all practices are also suspended. 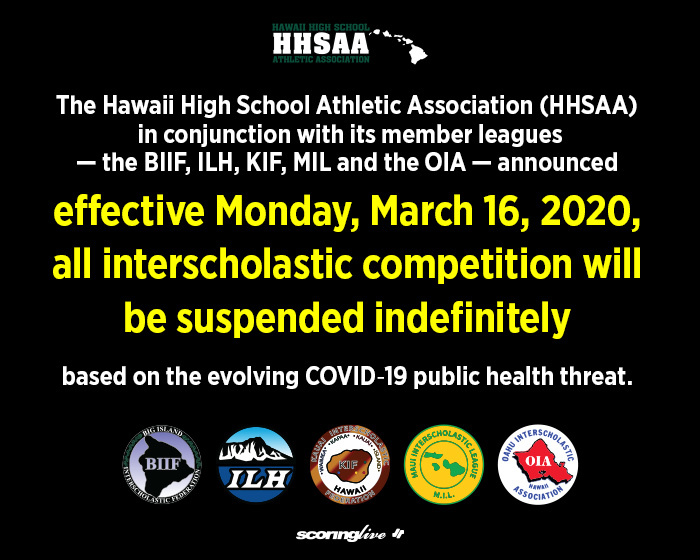 The announcement is in conjunction with all five member leagues amidst the COVID-19 threat.

The HHSAA announced in a press release Friday afternoon the indefinite suspension of all interscholastic competition due to the evolving COVID-19 public health threat. The suspension is effective Monday, March 16.

The announcement was made in conjunction with all five of the HHSAA's member leagues.

"The priority of the HHSAA continues to be the health and safety of our student-athletes, coaches, administrators and members of the community," HHSAA Executive Director Chris Chun said. "We hope that play can resume before the school year ends, but must be mindful not to jeopardize the health of our community in doing so. This decision was not made lightly and is supported unanimously by our member leagues."

A determination on the possible resumption of play would be made with the HHSAA, Hawaii State Department of Health and the Lt. Governor's office. The HHSAA said it would continue to evaluate the situation and make a later determination regarding its spring state tournaments scheduled for May.

The Hawaii High School Athletic Association in conjunction with its member leagues announced that effective Monday, March 16, 2020, all interscholastic competition will be suspended indefinitely based on the COVID-19 public health threat. More at: https://t.co/XX1FNdUTVW

UPDATE (March 16, 3:11 p.m.): All leagues will not allow its teams to practice during the pause in the spring season due to the COVID-19 situation, Chun confirmed on Monday. When the initial announcement to indefinitely suspend prep sports came down on Friday, teams were allowed to continue to conduct practices. However, as social distancing guidelines from the Centers for Disease Control (CDC) tightened over the weekend, which led to the change in policy to include practices, which will all be on hold until further notice.

Chun added that the leagues have committed to meet weekly to reassess the situation.

The HHSAA announced it would continue its indefinite suspension of all interscholastic competition and practices.

The Hawaii State Department of Education also announced school facilities will be closed until at least April 30 as well.

HHSAA Executive Director Chris Chun has not ruled out a spring modified season yet.

"The HHSAA and member leagues are asking the public to please comply with government instructions in hopes that we can return to our normal daily activities sooner that what is currently being projected," Chun stated in the press release. "We don't want to give up on the possibility of having a return to sports in the near future, but the leagues and the HHSAA are making the health and safety of our community its top priority."

Nothing is off the table yet. Every possibility will be discussed and vetted, but the Governor's Order prohibits resuming until May 1st at the earliest. Until then we need to stay at home so we can beat this faster.

A look back at an OIA West matchup between the Bulldogs and Marauders that took place on March 27, 2019.

The Kamehameha baseball team's visit to the Friendly Isle earlier this month served as a homecoming for...

Kamehameha's Togiai is Division I POY

The Warriors went undefeated in ILH play and won every game in 2020 that Togiai suited up in.

The Pearl City junior was the pitcher of record in wins over Waianae and Kapolei and is now 2-0 with...

The senior southpaw tossed five innings of one-hit ball and batted 3 for 3 with two RBI against Waianae...