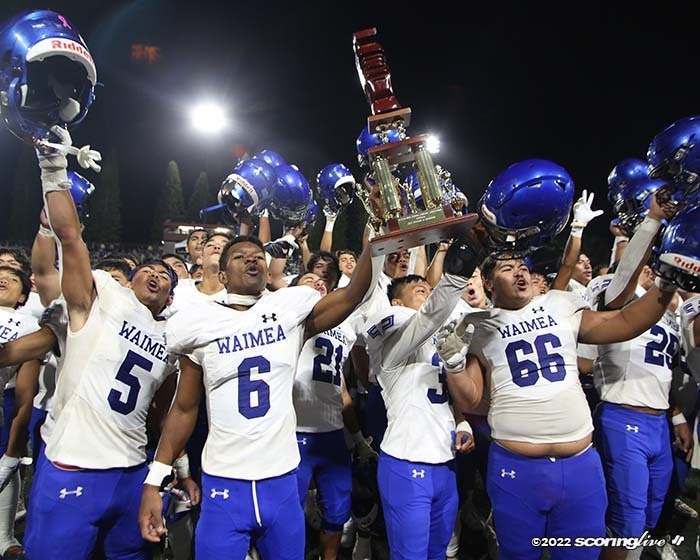 Waimea's Kenny Okeigar (6) helps hold up the championship trophy as the Menehune salute their fans after winning the title. Greg Yamamoto | SL 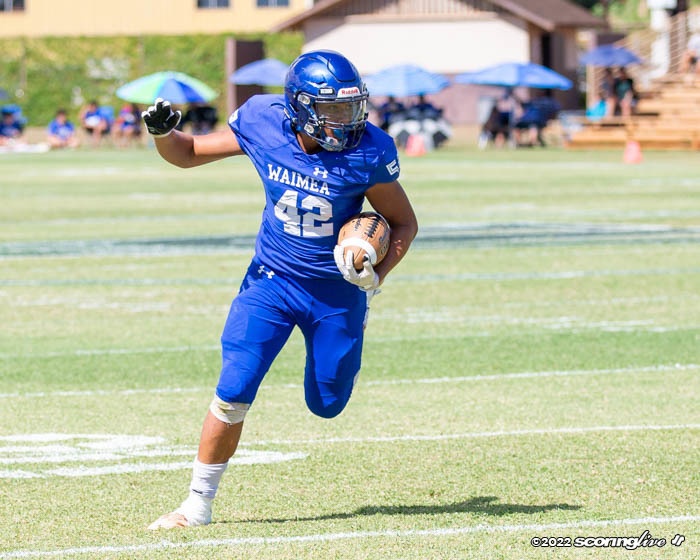 Rhaziah Tacub-Taniguchi gets free after a 12-yard reception against the Kaiser Cougars. Brien Ing | SL 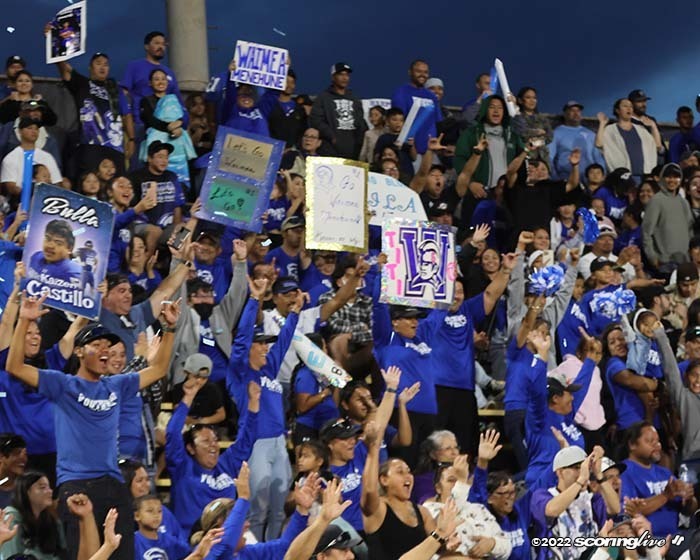 The 2022 edition of the Waimea Menehune illustrated the meaning of Laulima in their run to their first-ever state title.

Many hands indeed made the work light for the Division II champions.

Multiple players stepped up for run-first Waimea in their three state tournament games in November as a different player led the team in rushing in each contest.

The Menehune stunned Kaiser in the opening round behind a season-high 230 yards and three touchdowns from Aukai Emayo en route to a 48-7 win. Emayo hurt his hip early in the semifinal against Honokaa, but Kaili Arakaki was able to step in to the tune of 102 yards and two TDs for a 17-0 victory.

In the championship game against King Kekaulike last Saturday, it was Kameron Apilado with 228 rushing yards with TD runs of 70 and 85 yards in a 45-6 victory.

Kameron Apilado does it again! This time from 85 yards out as he extends Waimea's lead over King Kekaulike, 38-6, with 8:42 left in regulation.

"With all that weapons, it makes my job a little difficult to get guys the ball, but it's by design," said Waimea coach Kyle Linoz. "We'll see what they're trying to take away and we'll go to whatever options is open."

The last time Waimea made an appearance in the state tournament was in 2003. The way football is played has evolved since then, so it was jarring to see the Menehune employ no receivers and three backs in the backfield on their first possession of the postseason 19 years later.

Emayo was the clear-cut lead back against the Cougars, but different pieces of Waimea's rushing attack kept the Kaiser defense guessing for most of the game. Robbie Correa functioned as the quick dive man and had 46 yards and a TD. Against the Cougars, Arakaki was the speed threat that ran sweeps, scoring on his first carry around left end from nine yards out to cap off Waimea's opening drive.

The unsung hero of the group might be junior Rhaziah Tacub-Taniguchi. He lead blocks majority of the time on offense, but he did catch Waimea's lone reception against Kaiser for a 12-yard gain to extend the Menehune's first series.

Most teams would not be prepared against Waimea's traditional offense the first time they see it — but Honokaa, who had a first round bye, scouted well and had a game plan in the semifinals.

Waimea scored on its opening possession against the Dragons with the same play it used to score its first TD against Kaiser — an Arakaki sweep around left end — but Honokaa's defense stood strong for the rest of the game.

The Menehune offense stalled three times in the red zone after the score, resorting to three field goal attempts while only converting on one to make it a 10-0 game midway through the third quarter. Waimea also lost Emayo and even Correa, who injured his shoulder on defense making a sack, to make things tougher offensively.

Honokaa was still in it for majority of the second half until Arakaki ripped off a 41-yard TD run with 2:23 left in regulation thanks to a couple of key blocks and his speed to get around the edge.

Arakaki's scoring run helped the Menehune reach 222 rushing yards against Honokaa, but it was a far cry from the 398 that they put up against Kaiser the week before.

Coach Linoz noticed and hit the time machine on the Waimea offense for the championship game against Kekaulike.

After holding Na Alii to a three-and-out on their first possession, the Menehune stunned everyone and came out in a spread formation on their first series of the game.

Apilado acted as the trigger man with Arakaki as the back next to him as Waimea marched down the field with ease deep inside Kekaulike territory to get the Menehune into field goal range for a 22-yard boot from Haweo Akeo.

Na Alii coach Tyson Valle admitted after the game that they were not expecting the spread, at least not to start the game. Even one of the media members on press row asked "is this the Wing-T?" while Waimea marched down the field with four receivers spread out.

The Menehune never passed out of the spread and had no passing yards in the game — because they didn't need to. The numbers in the box favored the run all day as they feasted for a total of 443 rushing yards against Kekaulike.

"That was the plan," Linoz said. "We knew Honokaa gave us a really tough time with our run game so we came out and tried to spread it apart, spread it out, see how they adjust and we liked how it looked so we just stuck with it."

Waimea did run its spread package earlier in the tournament, on its third series against Kaiser, but they quickly filed it away for safe keeping after going up 14-0 against the Cougars.

Apilado, who is a key contributor in the defensive secondary, was the biggest beneficiary of the spread package. Linoz knew coming into the game that Apilado would have a big game.

"Kameron is an outstanding football player," Linoz said of Apilado. "We knew that he was going to come out tonight and show everybody who he is."

Laulima was not limited to the offensive side of the ball however.

A big boost Waimea got in the state tournament was in sophomore Mykah Brun, a junior varsity call-up who played a hybrid safety role for the Menehune in the postseason.

Brun led Waimea in tackles against Kaiser with five, which included a tackle-for-loss on a screen pass to the running back. He added two interceptions against Honokaa while adding two more TFLs and he scored on a fumble return in the championship game to give Waimea a 10-0 lead against Kekaulike.

Defensive substitutions in the semifinals against the Dragons also helped Waimea get a shutout victory. To counteract the mobility of Honokaa quarterback Elijah Kaupu-Alip, the Menehune went with speed over size on the defensive line with Kody Erdmann (5-10, 170) playing at left end and Brennen Fernandez (5-6, 148) playing at right end.

Both Erdmann and Fernandez had one of Waimea's five sacks against the Dragons. Zephan Niheu-Kamaka (5-6, 140) and Johnny Pimental (5-9, 188) also had quarterback takedowns as well.

Special teams also had contributions from returners Josiah Banasihan and Kenny Okeigar. Banasihan returned the opening kickoff against Kaiser 44 yards across midfield while he added a 35-yard reception against Honokaa to extend a drive.

Okeigar had a punt return for a TD against the Cougars nullified due to a penalty, but he found the end zone anyways later that game on a 58-yard pick-six. He also stepped into Arakaki's role on offense in the last two games when Arakaki took over lead back duties for Emayo.

No matter how you slice it, many hands were needed to help Waimea make history.

Some of those hands weren't even on the field.

Coach Linoz, a 1991 graduate of the school, was quick to acknowledge the tutelage of former coaches Tommy Rita, Patrick Pereira and Jon Kobayashi. Linoz also gave credit to the many Waimea fans that made the trip for the title game.

"Our kids were chicken skin when they saw how much people were here, this is our crowds on Kauai," said Linoz.

"Everybody came. Airplanes, boats, whatever they could catch to get over here. This is the topping on the cake. This is all of our families right here believe it or not. We're all related somehow up in the stands." pic.twitter.com/xIF8YuJwCx