Football
It all starts up front for Kekaulike 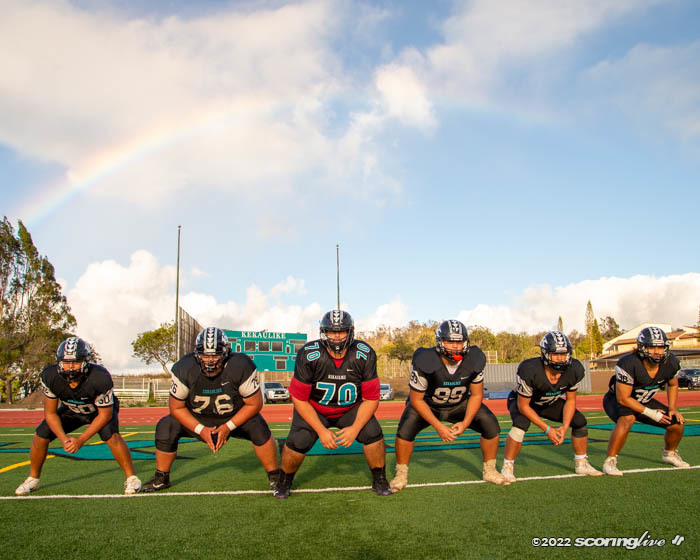 For Nalaninuiakea Crozier and his King Kekaulike teammates, a return to the HHSAA state tournament is a dream a little more than 15 years in the making.

"We were just kids, not even, we were still babies," laughed Crozier about the last time Na Alii played in the postseason in 2006. "Yeah we were still babies so just the fact that we're here now you know representing where we come from, you know upcountry, we're ready to go."

That Kekaulike team incidentally did a lot more than just participate in the Division II tourney that year. It entered as the number two seed, knocked off defending champion Iolani by a single point in the semifinals and then took down top seeded Kauai 33-20 to win the whole thing. That state title for Na Alii was a first, not only for a Maui team, but for any of the neighbor islands.

With three starters on the offensive line weighing in at 350 (Ryder Cleghorn), 360 (Kimo Moniz-Kekumu) and 410 (Crozier) pounds respectively, head coach Tyson Valle knew a shift in offensive concept was the way to go.

"We just felt that you know the size and strength that we had upfront I mean it just made sense for us," said Valle. "So we switched our offense to a Wing-T type of offense, and we're known for running backs up here so making a switch was huge for us and you know the line just meshed right into it."

That difference showed in the numbers alone, with an offense that averaged just 5.7 points per contest and were shut out four times in 2021, put up nearly triple that output per game pointwise (15.9) with 20 rushing scores in 2022, compared to just three a season ago.

But its not all size on the line that's been beneficial, as Crozier pointed out.

"For how big we are we can move, but you know sometimes the other guys move better which is good," said Crozier. "We have people like Devin Roberts, Henny Lafaelei, you know to help us on the tackles."

The lanes created by the offensive line have certainly made an impact in the run game, where quarterback Kalelepono Wong averages 8.4 yards a carry and running back Tysin Zackious 5.7 per tote. Both have a combined 1,600 yards on the season and 18 touchdowns.

In particular, Crozier, who stands at 6-foot-4, 410 pounds, can be pretty imposing to defenses.

"We do a lot of pulling which is very good for us big guys," said Moniz-Kekumu. "When you see Nui coming down behind everybody you know nobody really wants to get hit by this guy."

Despite the improvement, it was still quite the battle for Na Alii to earn a state berth, who finished MIL league play with a 4-5 record.

Its two wins over Baldwin were fairly comfortable, but the margin in the two victories over Kamehameha-Maui was just 11 points total, including a nail-biter on Oct. 29, 28-25, to earn the MIL berth. The win also snapped a three game skid for Kekaulike, who were reeling from injuries, in particular on its front line.

Kekaulike, the top seed in the bracket, plays host to OIA champion Nanakuli Saturday. The Golden Hawks rolled to a 38-6 win over PAC-5 in the opening round.

"We know we know Nanakuli is a tough team but we've been working hard for this long and you know we didn't come this far just to give it up, so we're gonna bring all we got to get this state championship," said Crozier.

On a side note, a win for Kekaulike, coupled with a victory for Waimea over Honokaa in the other Division II semifinal, would set up a rematch of the first game of the season for the two squads, a non-league tilt that the Menehunes came out on the winning end of, 21-10.