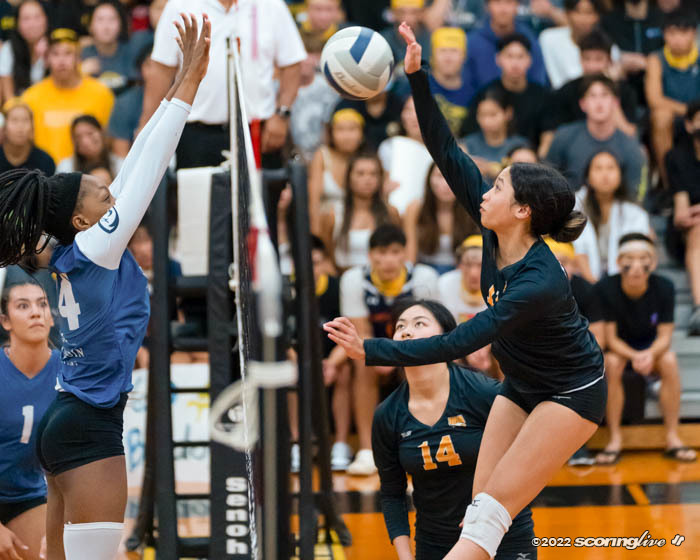 Le Jardin continued its unbeaten run through ILH Division II play with a hard fought 25-21, 25-20, 25-23 win over Hawaii Baptist in front of a fired up Spike Nite crowd at Dan Liu Gymnasium.

The Bulldogs were paced by Reese Diersbock's 11 kills and Gennezia Hawkins, who racked up nine kills to go along with four service aces, a block and 19 assists.

All three sets were closely contested, with Le Jardin capitalizing on errors late, ending set two on a 4-1 spurt capped by a kill by Sydnee Walker and the opening set on a 4-0 run that ended on an unforced error by the Eagles.

Set three found the Bulldogs with match point at 24-21, but the Eagles battled with two straight points, one a Marissa Nakata kill and the other a Caitlin Wong spike off of an assist by Leina Chu to get within a point, forcing the visiting team to call time.

Coming out of the timeout, Le Jardin went to Hawkins and she delivered, putting down the kill to end it.

Nakata had a match-high 17 kills and Wong was right behind with 12 of her own for the Eagles, who only saw four players register a kill on the night. Chu had 27 assists to go along with 2 aces.

Walker had a relatively quiet seven kills, and Nicole Andresch and Sydney Kennedy added five kills each for the Bulldogs. Kennedy also had three total blocks, including two of the solo variety.

Alyssa Courchene had 12 assists and allowed Hawkins to branch out as a hitter in spots.

Le Jardin concludes its regular season with two home contests, against Hanalani on Oct. 1 and versus Punahou II on Oct. 6. Hawaii Baptist faces off with Maryknoll on the road on Oct. 4 before finishing up with Damien on Oct. 6.

The Wildcats scored 28 straight points in the first half and held on to take home their first-ever state...

Kameron Apilado rushed for 228 of the Menehune's total 443 yards on the ground to help the KIF win back-to-back...

The Red Raiders churned out 260 rushing yards and limited the Buffanblu to 197 total yards in the title...

The 5-foot-7, 170-pound sophomore wide receiver/safety has factored into a staggering 25 touchdowns for...

The Marauders’ usual offense output was bolstered by a defense that held the Raiders to a season low...

Kaili Arakaki stepped up and ran for 102 yards and two TDs as the defense totaled five sacks and three...