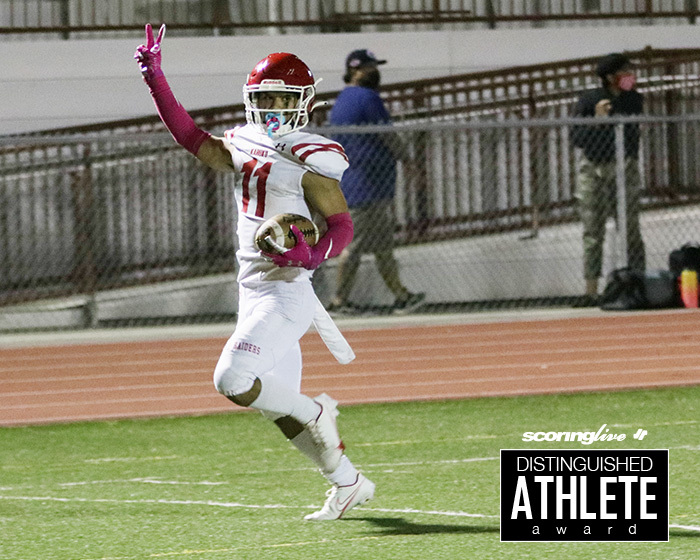 Be it on the football field, soccer pitch or in the classroom, Kainoa Carvalho is always grinding.

It should come as no surprise then, that the Kahuku senior-to-be stands out in each arena.

Carvalho, who put together a dazzling junior season at a wide receiver and kick returner for the state champion Red Raiders last fall, also has a 4.0 grade point average to his name – a feat he's quite proud of.

"My parents always raised me that I'm a student before the athlete, so always gotta take care of classes and schoolwork first before I can go play; that's always been a habit for me," Carvalho said in a recent phone interview.

That foundation was set by Carvalho's parents, Stewart and Yuri, in both Kainoa, who goes by the nickname "Kaikai," and younger brother, Kaimana, a sophomore-to-be defensive back for Big Red.

"We go one-on-one a lot and just my whole family has been very supportive. My mom is a big help in my life and just all my trainers throughout the offseason – Kawe Johnson, Rebel Squad with coach Sola (Soliai), coach Keala (Santiago) – they all helped me during the offseason and it really helped me this season and it helped me get to the next level; I felt faster, stronger and knew I could dominate my opponent every snap," Carvalho said.

And dominate he did.

Carvalho put together a breakout campaign to the tune of 1,000-plus receiving yards and 16 total touchdowns – including five on special teams – and picked up All-Hawaii Open Division Offensive Player of the Year recognition. Furthermore, he was tabbed as the winner of the Pizza Hut Male Newcomer Award last week.

"Of course, I couldn't have done it without my teammates," Carvalho said in grace.

Carvalho displayed further humility when notified that he was selected by ScoringLive staff as the male recipient of the Distinguished Athlete Award for the reently-completed 2021-2022 school year.

"The main goal was to win states and with all the uncertainty with COVID and our season being pushed back, we bonded together as a team and I feel like without them I wouldn't have had any of the success I had," he expressed.

Of course, being surrounded by family always helps. Kaikai's uncle, Sterling, is the head coach, while his father, Stewart, coaches the receivers and also serves as special teams coordinator.

"With my uncles and family around, they trusted me and I had a lot of pressure on my part, but I think I handled it well, but this season was truly special," Carvalho said.

Trust, of course, comes with time, but through his relentless work ethic and attention to detail, Carvalho solidified his role as not just a standout on the gridiron, but a consummate leader off of it. He noted that for all of the gaudy stats and highlight-reel trips to the end zone, there was the never-ending grind of hard work that went unnoticed by most.

"They didn't see the grind behind the scenes. As a team we did a lot of lifting, running – just because of COVID we were trying to get back into it, so we did a lot of conditioning – even the offseason was just a lot of grinding to get back to where we should be," Carvalho said. "All the behind-the-scenes work and even just the team bonding we do – I don't think people realized how close we were as a team last year – and I think that's what separated us from other teams."

Carvalho pointed to the Red Raiders' camaraderie as the deciding factor in a come-from-behind 21-14 win over Mililani in the OIA championship game.

"When we were down fourteen-zero to Mililani, the leadership and all the trust we had in each other to just get out of the hole – that helped a lot throughout the season," said Carvalho, who drew a comparison to the adversity that he and many students faced back in the classroom last year, as in-person learning resumed after the prior school year was almost exclusively distance learning.

"Even in the classroom it was kind of a rough year, but with everyone coming back to school it was nice to see all of your friends again and in-person school. I have a 4.0 GPA so there were a lot of late nights staying up, getting projects done," Carvalho said.

But if not for an 11th-hour decision by Carvalho back in August to stay at Kahuku, things might not have played out the way it did for him and the Red Raiders.

After his freshman season on the Kahuku junior varsity squad in 2019, Carvalho played his sophomore season at Skyridge High in Lehi, Utah. He returned to the North Shore in the hopes of suiting up for the Red Raiders as a junior last year, but a suspension of all extra-curricular activities announced by then-interim superintendent of the state Department of Education, Keith Hayashi, just two days before the scheduled start of the prep football season left many, including Carvalho, wondering if there would be a season at all.

Ultimately, Carvalho was among a handful of key juniors – including defensive standouts Liona Lefau, Leonard Ah You and Brock Fonoimoana – who decided to remain a Red Raider.

"I mean, for me it was a pretty easy decision: my uncle is the head coach and had I never played on the Kahuku varsity before and growing up I was always the water boy for the varsity team," Carvalho reminisced. "You would see the crowds and I'd see many Kahuku greats come out and so it was always a dream of mine to be a Kahuku Red Raider and play for something more, because there's so much tradition and I just wanted to make a name for myself and hopefully just prove to everyone that I belong there."

Carvalho grew up playing at Laie Park and always looked up to Red Raiders past and present. In his mind, there was never a doubt where his heart was.

"I was never really that superstar growing up, but I felt like I really stamped my mark this season and showed especially the community – because they're so involved in football – so I just wanted to prove to everyone that yeah, I can play," Carvalho proclaimed.

At the end of the fall season, Carvalho turned his attention to soccer and helped Kahuku to an 8-5 record. He led the team in goals scored and was an All-OIA East Second Team selection.

"Soccer is my first sport and it's just fun to me and I love having fun, being happy, just meeting new people, hanging out with different groups and it opens up a lot of opportunities to go hang out," said Carvalho, who is also a member of the track and field team during the spring season.

"Even track was a lot of fun and it helps you on the football field as well, gets your footwork ready – speed, stamina – all of this helps in the long run with football, but it's also a passion for me as well, so I enjoy it; it's a passion for me, but it also benefits me in football," Carvalho said.

While Carvalho continues his preparation for the upcoming 2022 prep football season, he's also looking ahead at his options at the next level. He's picked up scholarship offers from 10 different schools as of late June – including Utah, San Diego State, all three Military service academies and the University of Hawaii – but is keeping his options open for now.

Yale has also offered Carvalho, who had just wrapped up a campus visit to Harvard when reached by phone last week.

"I'm making sure I'm getting A's and taking the right classes; it just opens up so many opportunities, like just today I visited Harvard. I never would have imagined visiting Harvard," Carvalho said. "I'm just fortunate that my parents raised me right and it's opened up all these opportunities for me to explore."

Established in 2013, the Distinguished Athlete Award, presented by Ala Moana Hotel by Mantra, annually honors the top male and female student-athlete in a single sport during the past year. For a list of past winners, click here.