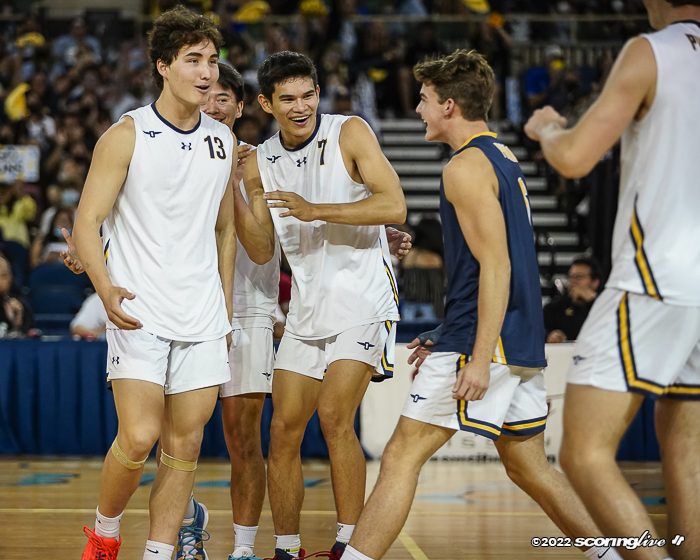 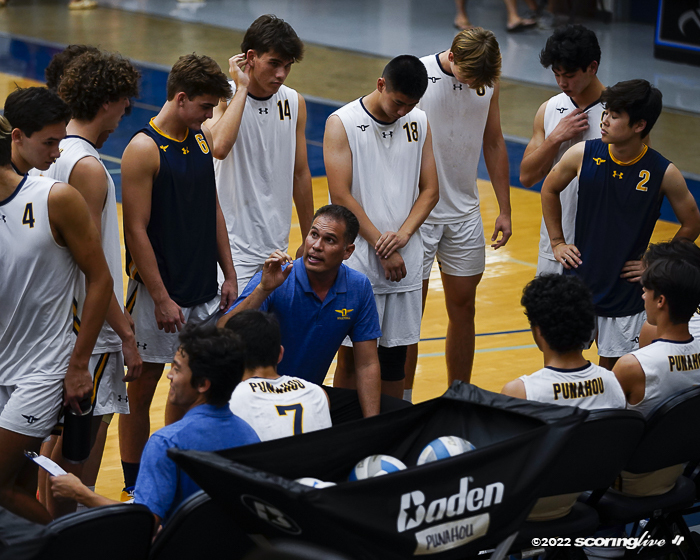 For as many state championships as the Punahou boys volleyball team has won in its illustrious history — 38 to be exact — the Buffanblu aren't taking their most recent title for granted.

With its sweep of previously-unbeaten Moanalua in last Saturday's title game of the New City Nissan/HHSAA Division I State Championships, Punahou captured its ninth straight crown. It was also the 11th time in 12 years under Rick Tune that the Buffanblu finished as the top team in the state.

While Tune and the Puns are certainly no strangers to success, this one was a bit personal for the longtime coach. That's because when the final point was scored at the Neal S. Blaisdell Center Arena Saturday night, it meant the end of the prep career of Aidan Tune, the son of the coach.

Aidan Tune went out with a bang. He put down a match-high 16 kills and hit .414. Additionally, he tallied seven digs, was a perfect 15 for 15 in serve-receive and also added a couple of service aces.

"I've seen him play like that and a lot of these guys, you can say that about all our seniors," Rick Tune said of his son, who was selected as the tournament's most outstanding player.

Tune was quick to point out the efforts and contributions of the rest of the senior class as well.

"For Keau (Tavares Thompson), for Riley (Haine), for Brayden (Simmons), Keegan (Au Yuen), for Brighton (Yap), and Teke (Bower) — and also for Aidan — I just have nothing but gratitude as well. I mean, they've given their heart and soul to this program," Rick Tune said.

The connection goes far beyond just the high school season; most of the senior group also play together for Tune at the Spike and Serve Volleyball Club.

Tune's ties with the bunch goes back 10 years.

"Super grateful for Rick," said Haine, who recorded a double-double with 15 kills and 10 digs in Saturday's championship match. "He's done a lot of things for us and (I'm) definitely going to miss not playing for him anymore. It's been a fun 10 years and I just love all these boys to death, I love coach Rick — it was awesome."

The strong bond that the Buffanblu share with one another — and with their coach — was surely forged through hundreds of hours in the practice gym.

"Outside of the school season, we all play on the same club team — most of the seniors on the team — and so we're obviously putting in work and practicing then and we're also lifting lots of weights and then when it comes to school season, we're practicing almost every day of the week and again, just keep putting in that work and I think it really pays off," Haine said.

The group of seniors were just freshmen when Punahou won its previous state title in 2019. Three of them were on the team as ninth-graders in Au Yuen, Thompson and Aidan Tune.

But rather than lament what could have been if not for the coronavirus pandemic, Aidan Tune struck a different tune in his comments after Saturday's state final.

"It's out of our control what happens or doesn't happen with COVID, but we're just super grateful to have a season and to have states, yeah, just stoked to play," he said. "Always love to play volleyball."

His father/coach shared the same sentiment.

"It's just precious," Rick Tune said. "I mean, you really realize how important athletics are to young people and to communities."

As for his thoughts on his son's recently-completed prep career?

"It's hard because I spend so much energy and effort clicking out of dad mode," Rick Tune explained. "The last 10 years we've had the agreement that when we're on the volleyball court, I am coach, I am not dad and so it's hard for me to click that off right now, but I love my son tremendously and I'm excited to see him go to the next level and see what he can do there."

Aidan Tune is signed with Pepperdine, where his father finished out his collegiate playing career after starting out at the University of Hawaii.

"I'm gonna miss him, but I will say I've had this group for 10 years and I'm gonna miss so many of them," Rick Tune said. "They all feel like family to me in a lot of ways."

"I'm just grateful to have him as a coach and (to) be part of this program," he said.

Punahou completed a perfect 16-0 record this spring. In addition to Aidan Tune headed Pepperdine, Tavares Thompson will play for Ball State, Haine is signed with USC and Au Yuen with Concordia-Irvine.

Savanna Simons swatted a two-run home run that was part of a three-run top of the first inning for the...

Raiders seeking repeat after fending off Trojans in semis

The Spartans scored in six different innings and got 12 hits, including two home runs, to stun OIA champion...

Ailana Agbayani threw a no-hitter and drove in the game-winning run to help the Raiders advance past...

The junior left-handed pitcher appeared in two games for Waiakea at last week's state tournament and...