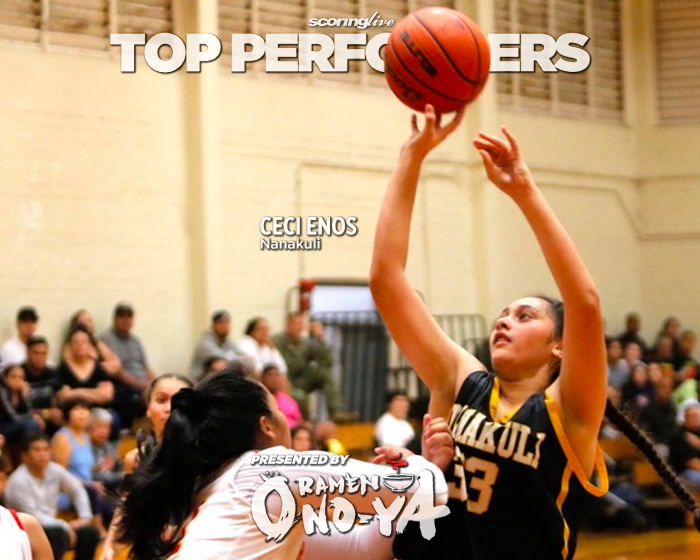 Don't expect any kind of self-promotion when it comes to Ceci Enos.

That's because the Nanakuli senior hoopster lets her play on the basketball court do all the talking for her.

Enos, a 5-foot-8 forward, is in her second full varsity season as a starter and is coming off of her best game to-date, according to her coach. She poured in a season-high 20 points to help the Golden Hawks to a 55-41 win over Leilehua Friday night.

"I think she did awesome," Nanakuli coach Sasha Montez said of Enos's performance against the Mules.

"It was the most aggressive I've seen her play. She was diving on the ground for loose ball, walling up on defense, she was not afraid to bump inside and her teammates fed off her energy."

Enos scored 16 of her points on field goals — all coming on 2-pointers — with the rest coming from the free-throw line, where she shot 4 of 5.

"Her points were spread out throughout the game. She was able to catch the ball, see what's open, make some reads, take it to the basket — most of her points, if not all of her points came from inside the key," Montez explained. "She was able to get to the free-throw line and not fade away from the defender."

Montez was especially pleased with Enos for not shying away from contact, something that she has worked to improve upon since she first was called up to varsity toward the end of her freshman season.

"She was my gentle giant, but now she's my silent assassin," Montez laughed. "She's a lot more aggressive so I'm very impressed with her physicality this year."

While Enos has improved that aspect of her game, she has always possessed basketball smarts, Montez added.

"In all honesty she has one of the highest basketball IQs so her ability to make plays and execute on both ends of the floor gives our team the energy that we need. She doesn't like talking much, but she lets her playing do the talking for her," Montez said.

She went on to describe Enos, who attends Kapolei Charter School which does not field a girls basketball team, as selfless and a team-first type of player.

"She can put up twenty (points), but she's still trying to create for her teammates so she's very, very unselfish with the basketball. Her role is just making plays, in all honesty," Montez said. "She has the green light to create things for us and her team. Whenever she's on the court she'll get her teammates open or she'll get some buckets."

Montez noted that not only did Enos score a bunch of points against the Mules, she also had a number of assists and also got the job done on defensively.

"It's the same thing on defense. She'll just find some ways to make plays for us on both ends of the floor — defensively and I would say she's one of our better rebounds as well — so she's all around just very fundamentally sound," Montez said.

For a ‘big,' Enos runs the floor well, Montez pointed out, which translated to a few points in transition in the win over Leilehua.

"She can move and get up and down the court," she said. "The last couple years we've been trying to get Ceci to unhook her trailer, so that impressed me, her ability to move on both ends of the floor."

Montez added that Enos's defense tends to get overlooked at times.

"She makes steals. She gets a lot of steals for us because defensively she's able to anticipate," she said. "She's really good at anticipating and so what may look open is not open because she's able to help and recover on defense. Not only will she make steals, but she'll be that next person on that help-side defense."

In addition to her play on the court, Enos provides leadership for the Golden Hawks as one of three team captains — despite her rather demure nature.

"She's getting a little bit better with communication, but she just lets her play do the talking for her and she leads by example. I would say that she doesn't like to talk, but she trying to talk so her team sees that she is trying and so her teammates are trying to talk, too, so it's contagious in that sense, but I do have a lot of youngins this year," said Montez, whose roster includes five freshmen and two sophomores.

"All of her teammates, they look up to her, especially our underclassmen," she added. "They're always in awe with her ability to execute on the floor and make plays for us."

One of the other leaders for Nanakuli is senior point guard Jahlyxcs Liana, who is averaging a team-best 19 points per game and also netted 20 points in the victory over the Mules. Montez said that connection that Liana and Enos share is crucial to her team's success this season.

The 14-point win over the Mules was a much-needed one for Montez's squad, which had lost back-to-back-to-back games against OIA West frontrunners Kapolei, Radford and Mililani leading up to Friday's contest.

"It was huge for us. We really needed that win and we knew going into that game that it was a very important one for us to change-up in midseason after having three tough losses in a row, so it was just really important for us to bounce back and re-gather ourselves and keep grinding for these next few games and the girls showed up to play," Montez said.

Tyra Avenas, Kalaheo — Scored 14 points in a loss to Kalani

Jaznel Baker-Samuelu, McKinley — Had 10 points with 12 rebounds and three steals in a win over Anuenue

Mariah Galletes, Leilehua — Scored 15 points in a win over Waianae

Mandi Harada, Kalani — Scored 15 points in a win over Kalaheo

Keanu Huihui, Kamehameha-Hawaii — Scored 18 points in a win over Keaau

Jahlyxcs Liana, Nanakuli — Scored 23 points in a loss to Mililani and scored 20 points in a win over Leilehua

Mailana Mattos, Radford — Scored 14 points in a win over Aiea

Dynasty Maunakea, Leilehua — Scored 19 points in a loss to Nanakuli

Julien Parado, Campbell — Scored 20 points in a win over Waipahu

Makelah Richardson, Roosevelt — Scored 14 points with five rebounds and five steals in a win over Farrington

Sarah Schubert, Kamehameha-Hawaii — Scored 24 points in a win over Keaau

Avery Snyder, Waiakea — Scored 20 points in a win over Pahoa

Talailelagi Wily-Ava, Kahuku — Scored 17 points in a win over Castle

Micah Ahsee, Kaiser — Scored 17 points in a loss to Kahuku

CJ Bostic, Kalaheo — Scored 17 points in a win over Castle

Tyler Grover, Radford — Scored 20 points in a win over Waipahu

Amari Westmoreland-Vendiola, Kahuku — Scored 25 points with six rebounds and one steal in a win over Kaiser

Kaina Morrison, Kaiser — Scored the lone goal in a win over Kahuku

Kalie Otani, Kaiser — Scored the lone goal in a win over Castle

Seamas Mercado, Kaiser — Scored the lone goal in a win over Kahuku

Sophomore signal caller factored into four touchdowns for the Cougars, who notched first win since Oct...

No. 5 Campbell wipes out Kailua in season opener

Jaron-Keawe Sagapolutele helped the Sabers score early and often and the defense put on the clamps to...

Liatama Uiliata posted 228 receiving yards and scored on both sides of the ball to power the Marauders.