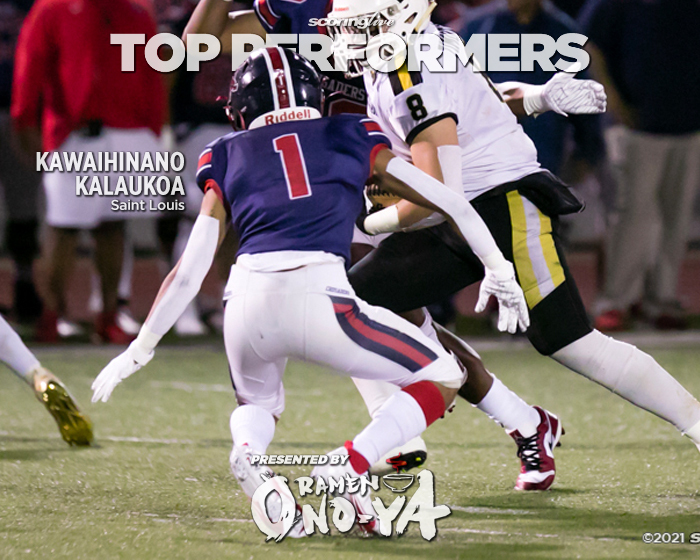 Kawaihinano Kaluakoa is a microcosm of the Saint Louis football team's defense this season: perhaps a bit undersized, but not lacking for play-making ability.

The 5-foot-8, 152-pound senior safety provided a pair of monumental plays in the closing minutes of the Crusaders' come-from-behind 27-25 win over Mililani Saturday night at Farrington's Edward ‘Skippa' Diaz Stadium at Kusunoki Field.

After his team had pulled back ahead, 27-25 — thanks to a 38-yard field goal by Lason Napuunoa with five minutes and 46 seconds left to play — Kalaukoa halted the Trojans' final two offensive possessions to preserve the win for Saint Louis and set-up Thursday's title game of the First Hawaiian Bank/HHSAA Open Division State Championships against No. 1 Kahuku.

Mililani's penultimate possession reached midfield, but on fourth-and-12, Kalaukoa picked off a pass by quarterback Emana Tarape at the Crusaders' 30-yard line and returned it to the Trojans' 38, although a personal foul penalty brought the ball back to the Saint Louis 47.

However, after the Crusaders went three-and-out and punted away, Mililani got the ball back with 1:17 remaining and picked up a couple of first downs to cross midfield. On the final play of the game, Tarape heaved a deep pass over the middle that was intended for wide receiver Gavin Hunter, but it was batted away by Kalaukoa instead.

"That's the thing, that's really the thing is him being in the right place at the right time to break-up the play and he has that nose for the football, so that's what we need for him to do," Saint Louis coach Ron Lee said. "He needs to hold that deep middle, move around back there and make the plays and he did that, so he has to do that one more time."

Early on the in the game, Kalaukoa forced a pair of first-quarter fumbles by the Trojans. While both fumbles were recovered by the offense, each drive resulted in a punt.

Lee pointed out that although his late-game heroics in the secondary were key to the end result, Kalaukoa's help against the run was probably more important.

"I think he helped us on the run more so than the pass," said Lee, who alluded to Mililani's more than 15 minutes of possession time in the first half.

"Mililani really controlled the clock by running the ball and keeping the ball away from the offense, so we need to get the ball back. We only ran six plays in the first quarter; that doesn't help," he said. "They dominated the football."

The Trojans had 81 yards rushing by halftime. They finished with 112 for the game — two fewer than the Crusaders managed.

"They were a lot better in the second half," Lee said of the defense. "The first half (Mililani was) running the ball right up the gut. We only had eleven (offensive) plays with about four minutes left in the half. You lose games that way, you don't win those games where they double the time of possession and they had over two-hundred yards in the first half, so our defense needed to step up, no question, and they did."

Lee credited the defense for rising to the challenge with his offense working out some kinks after a layoff of six weeks since they last played a game.

"We didn't play very well on offense; we struggled. AJ (Bianco) was running far too much, not hanging on on his reads and his progressions and I give Mililani the credit," Lee said. "They changed the coverage and they did some good stuff and caused us problems so it took us a while. We'd run some good plays and then we'd get called for holding and this and that and break the momentum of the drive, but to these kids' credit, we found a way to get it done at the end."

Now, more than two years after it captured a fourth straight Open Division state crown back in the fall of 2019, Saint Louis will have a shot at a five-peat come Thursday night.

"All of these guys didn't play much before this year. They were behind some pretty good players in 2019, so they're kind of learning and we're so lucky where we can have this 2021 season," Lee pointed out. "It's good for them, it's good for the team. We don't really have a lot of guys that can dominate; they all have to play team defense more than anything else."

Kalaukoa himself was a back-up that season to now-University of Utah safety Kamoi Latu.

"This is his first year really playing and all season he's been the starter and he didn't have a junior year because we didn't have football, so give him credit for what he's done in the one season," Lee said.

Although he is far from the biggest player on the field, Kalaukoa's presence is a commanding one, to be sure.

"He's smart. He takes risks from where he sits in the secondary but he's a pretty smart kid and he's playing with more confidence, so he's improved tremendously from not having a junior season," Lee added. "He has good anticipation on the ball on passing situations and he also comes up and supports on the run, so he's had a good season, but we just need another good game this week because Kahuku has tremendous athletes and we need to step it up because they've very explosive and that's where these guys will have to come in; they have to match-up with their guys."

Kalaukoa and the Crusaders (6-3) will look to extend their current win streak to five games when they take on the Red Raiders (9-0) Thursday at Farrington. Kickoff is scheduled for approximately 7 p.m. and will follow the Division I state title game between No. 7 Iolani (10-0) and No. 8 Lahainaluna (7-0) at 3 p.m.

Leonard Ah You, Kahuku — Had two tackles for loss and one sack in a win over Campbell

Hopo Aholeilei, Kaiser — Ran in two touchdowns and had one sack in a win over Radford

Nitus Auelua, Kahuku — Had 2 1/2 tackles for loss and one sack in a win over Campbell

Brody Bantolina, Iolani — Ran for 168 yards and two touchdowns on 29 carries and caught a 64-yard TD pass in a win over Aiea

Alexander Bianco, Saint Louis — Threw for 179 yards on 14-of-22 passing without an interception and ran for 62 yards and a touchdown on 16 carries in a win over Mililani

Ian-Jay Cabanilla, Lahainaluna — Ran in a touchdown and intercepted two passes in a win over Konawaena

Kainoa Carvalho, Kahuku — Caught nine passes for 100 yards and a touchdown in a win over Campbell

Taye Debina, Kaiser — Had one sack and forced a fumble in a win over Radford

Syncere Dillard, Radford — Scored on an 88-yard kickoff return for touchdown in a loss to Kaiser

Kama Espinda, Campbell — Had seven tackles and one for a loss in a loss to Kahuku

Jordan Fetu, Mililani — Made seven tackles and forced a fumble in a loss to Saint Louis

Anatello Flores, Lahainaluna — Collected seven tackles and recorded an interception, kicked field goals of 19, 30 and 30 yards and was 3 for 3 on extra point attempts in a win over Konawaena

Caleb Garcia, Kaiser — Scored on a 47-yard interception return for touchdown and forced a fumble in a win over Radford

Jacob Gaudi, Iolani — Had five tackles and two sacks in a win over Aiea

Blaze Holani, Saint Louis — Made five tackles and blocked a punt that was recovered in the end zone for a touchdown in a win over Mililani

Zion Junk, Iolani — Had four tackles and two sacks in a win over Aiea

Justin Kanekoa, Kaiser — Caught six passes for 134 yards and a touchdown and ran in another score in a win over Radford

Kruze Keanu, Kahuku — Had 5 1/2 tackles and two sacks in a win over Campbell

Kaikoa Kelii, Konawaena — Made six total tackles, including two for losses, and recovered a fumble in a loss to Lahainaluna

Sacrie Latu, Lahainaluna — Made 5 1/2 tackles, with one for a loss, forced two fumbles and recovered a fumble in a win over Konawaena

Kamakana Mahiko, Kaiser — Caught eight passes for 154 yards and a touchdown and scored on a 35-yard interception return for touchdown in a win over Radford

Jason Mariteragi, Kahuku — Threw for 115 yards and two touchdowns on 12-of-15 passing without an interception and ran for another score in a win over Campbell

Asher Matsui, Iolani — Had eight total tackles, including one for a loss, and intercepted a pass in a win over Aiea

Tysic Puni, Campbell — Had eight total tackles, including two for losses, in a loss to Kahuku

Iona Purcell, Saint Louis — Had five tackles and recovered a blocked punt in the end zone for a touchdown in a win over Mililani

Kamaehu Roman, Mililani — Made seven tackles and one sack in a loss to Saint Louis

Logan Rouse, Aiea — Had 8 1/2 total tackles and one pass break-up in a loss to Iolani

Blare Sylva-Viela, Lahainaluna — Ran for 100 yards and a touchdown on 17 carries and recorded an interception in a win over Konawaena

Elias Tania, Mililani — Made four tackles, two for losses, including one sack and forced two fumbles in a loss to Saint Louis

Emana Tarape, Mililani — Threw for 190 yards and two touchdowns on 14-of-28 passing with one interception in a loss to Saint Louis

Nehemiah Timoteo, Mililani — Ran for 106 yards and a touchdown on 18 carries in a loss to Saint Louis

Anthony Torres, Konawaena — Had nine tackles, including three for losses, in a loss to Lahainaluna

Ryan Tsuruda, Iolani — Had 5 1/2 tackles, including three for losses and two pass break-ups in a win over Iolani

Noah Wily, Saint Louis — Made five tackles, including one for a loss, and forced a fumble in a win over Mililani

Easton Yoshino, Kaiser — Threw for 272 yards and three touchdowns on 16-of-35 passing without an interception in a win over Radford