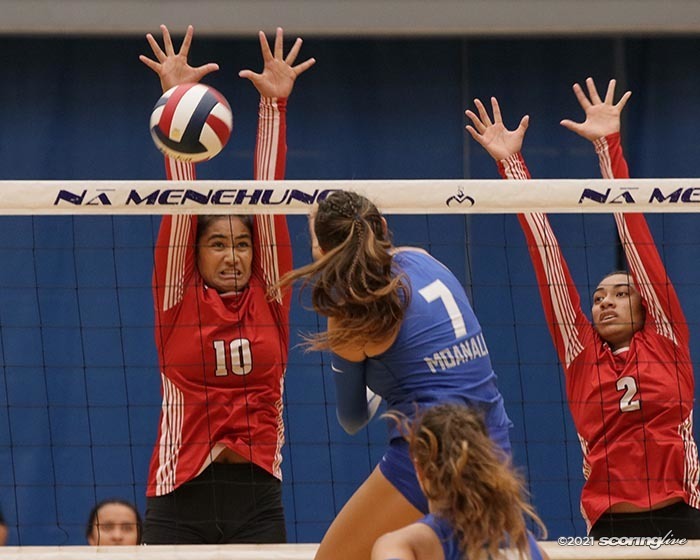 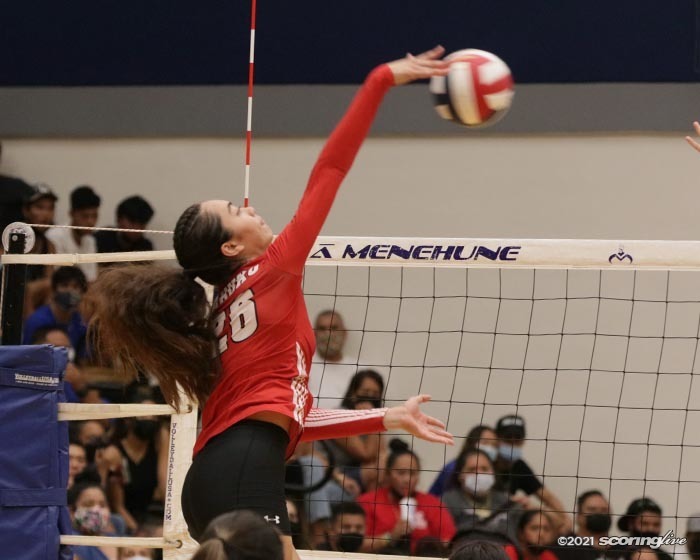 Kahuku freshman Chalei Reid puts down a kill against Moanalua in the OIA Division I championship game. Greg Yamamoto | SL

The match may have been at Moanalua's gymnasium, but it was Kahuku's "roofing company" that set the scene.

The biggest difference since then?

The addition of 6-foot freshman outside hitter Chalei Reid.

"They got bigger," Moanalua coach Alan Cabanting said with a chuckle after the match.

Reid had just one kill in the first set, but came into her own in the second set with four kills that included a push shot down the line from the right side to tie the match.

"She's amazing. Her energy and effort and work ethic is awesome," senior middle Emmalei Mapu said of Reid. "When she comes on the court, she might be young, but her energy is there. She's one of us. She doesn't care that she's the only freshman. She's just here to put in work and help the team as much as she can."

The plethora of weapons that the Red Raiders have were too much for Moanalua to defend successfully.

"Definitely we had to really stick it to them on our serve," said Cabanting. "If we couldn't get them out of system, we were definitely in trouble."

Fonoimoana picked up a key point in the third set thanks to a tandem play with a middle attacker, who went up for a quick attack. Fonoimoana followed directly behind the attacker and had a clear shot in the middle after Moanalua's blocker landed.

Another combination play proved to be the final momentum point of the match.

After back-to-back kills by Moanalua's Malu Garcia cut Kahuku's deficit to 22-20 in the third set, the Red Raiders ran a double quick play with Taumoepeau in the middle and Fonoimoana on the right side. The Moanalua block went to defend Taumoepeau, which freed up Fonoimoana to get the final sideout of the match.

Na Menehune had the upper hand to start the match however.

Moanalua came out firing to the tune of 19 kills in the opening set to take the early advantage. Passing also broke down and Kahuku couldn't work its middles as much.

The Red Raiders quickly made adjustments, starting with their mindset.

"I think it was a realization that this is a game not to be taken too lightly," said Kahuku coach Tuli Tevaga.

Kahuku also fine-tuned its blocking after the first stanza. Instead of working harder to stop Moanalua's attack, the Red Raiders worked smarter.

"(Moanalua) could mix up their shots, so we had to make sure that we were in a neutral position to defend against whatever they brought," said Tevaga.

The adjustment paid dividends in the pivotal third set where the Red Raiders registered six of their 10 total blocks.

Kahuku earned the second seed and a first round bye in next week's New City Nissan Division I Girls Volleyball Championships and will await the winner between Hilo and Waianae.

Mid-Pacific starts fast, then holds off Damien to notch first win of season

Ethan Escobido leads the way with 23 points for the Owls, to snap a three-game skid in league play.