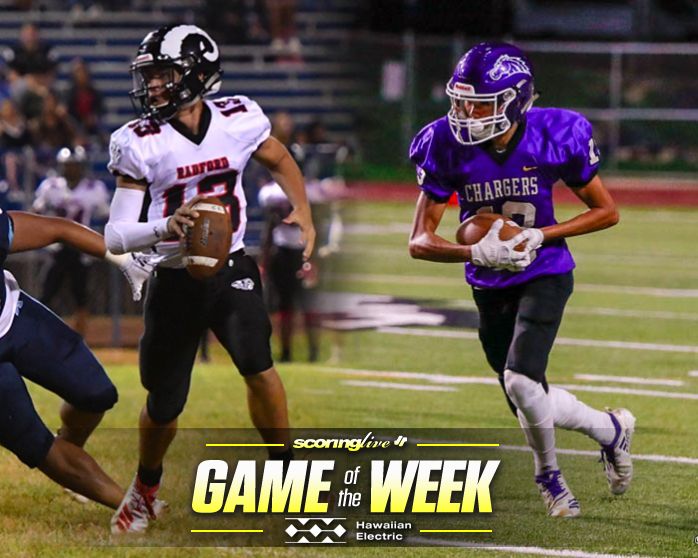 There will be a bit of a feeling-out process when the Pearl City and Radford football teams face-off Saturday night.

While it will technically be the second game of the season for both Division II teams, the Rams (1-0) will be making their season debut on the field after their win last week over Kaimuki came via forfeit.

Radford coach Fred Salanoa calls it a bit of a setback.

"I think it was. I think it was for the fact that we didn't get a real-life game situation and Pearl City obviously did. Waialua, McKinley, Kaiser, Kalani, Kalaheo, they all got live action and whether they were successful or not, I think that puts them up one on us as far as being able to understand what comes with the whole game situation," he said.

The Rams are one of only three D2 teams in the OIA who have yet to play a game. Aside from Kaimuki, the other is Nanakuli — which had a bye to open the eight-game, nine-week regular season.

"We're just trying to get better every day and try and get these guys ready for competition. You can only simulate so much during practice, but there's nothing like a real game situation with special teams, with referees and this week will be fans, so it's been two years, man, and we'll see how it turns out," Salanoa said.

The former Radford quarterback is high on the skill position players he has on offense, starting with his own signal-caller in junior Kalob Victorino-Avilla, who started a few games as a freshman in 2019. The receiving corps features some big targets for Victorino-Avilla in 6-foot-3 senior wide receiver Jack Carlson and 6-foot-1 junior slotback Landen Takamoto. Salanoa also pointed out sophomore receiver Roch Schaefer and senior running back Christian Payton as key contributors.

"I think we have decent skill guys. Some of these guys also play both ways," he said.

On the defensive side, Salanoa expects solid play from junior Elijah Falaniko and senior Jabez Aloalii-Maanaima on the line, with junior Naaliilaniokekai Nicholas-Mattos anchoring the second level from his middle linebacker position and senior safety Syncere Dillard leading the secondary.

The forfeit by the Bulldogs last week — which was announced Wednesday, three days before the game — meant another weekend without a game to look forward to for the Rams, but the players were well-prepared for just that to happen.

"As coach we kind of talked about it and we kind of anticipated that that would happen," Salanoa said. "Nothing against Kaimuki, but just because of the unfortunate situation with a last-minute coaching (change) and then obviously with all of these mandates of vaccinations and unvaccinated, getting exemptions and those types of things, we were kind of anticipating that the chances of us playing Kaimuki in week one was probably going to be slim and again, it's no disrespect or knock on them."

Salanoa explained that the coaching staff laid out the situation — as well as the un-welcomed, but likely outcome — to the players.

"We kind of prepared our players in that way that we were already kind of talking about, ‘If it doesn't happen, how are we gonna act and how are we gonna use that to turn it into a positive?' I don't think it affected us as much mentally, but probably the only effect of not having a game last week was not having to get into real-life action."

While Radford will be going through the game-day routine for the first time since 2019, Pearl City will be in action for a second straight weekend.

"Last week we were just excited just to play; we weren't worried about the score," Pearl City coach Robin Kami said. "Not playing for two years, I think everybody was just excited to play and I was very impressed with how our team played overall. All three phases, our team played very well, so I was very happy with the outcome."

Kami singled out Gleason — who will also see action on both defense and special teams — and free safety Mark Moreno as key players.

"Those two guys will be hopefully guiding us and with their senior leadership, everybody can follow them. Everybody else didn't play varsity football yet, so at least those two have some experience as three-year veterans," Kami said.

"No, I don't. I have no idea what I'll be coming into this Saturday," he admitted.

One byproduct of the Kaimuki forfeiture is a lack of game film for Kami and his staff to review on Radford.

"It's a little tougher when you've got no film on the opponent you're playing, but the bottom line is you still gotta play the game," he said.

Kami expects the Rams to be a more-than-formidable opponent.

"They're ready for a game," he said, alluding to last week's forfeit.

"They struggled the last couple of years in D1, so they're gonna be excited for the challenge in D2. Fred (Salanoa) always puts out competitive teams every year, especially in D2; the last time they were there they were state champs (in 2015), so we respect him for what he's done for the program," Kami said.

Salanoa also has a lot of questions about Saturday's opponent, but certainly not the head coach on the opposing sideline.

"I definitely don't know much about them," he said of the Chargers, "but I know their head coach, Rob Kami, and he does a wonderful job with his players that he has at Pearl City and having faced him in the past, I know that he gets his players ready, so as far as their personnel and what they're doing, I'm not too sure what they have, but I definitely know that we're dealing with the same coach that I know and he definitely gets his guys ready week in and week out and year in and year out."

Like his counterpart, Salanoa also expects a challenge from the visiting Chargers.

"I think across the board a lot of us are facing the same circumstances with COVID, but when all that smoke clears, knowing coach Kami, I know that they'll be ready and we'll make sure that we relay that message to our players to make sure that they're ready to face a good team that's coming in in Pearl City," he said.

The Chargers and Rams will play in the nightcap of a D2 doubleheader at Radford's John E. Velasco Stadium Saturday. Kickoff is scheduled for approximately 25 minutes after the conclusion of a 4 p.m. game between Nanakuli and Kalaheo (0-1).