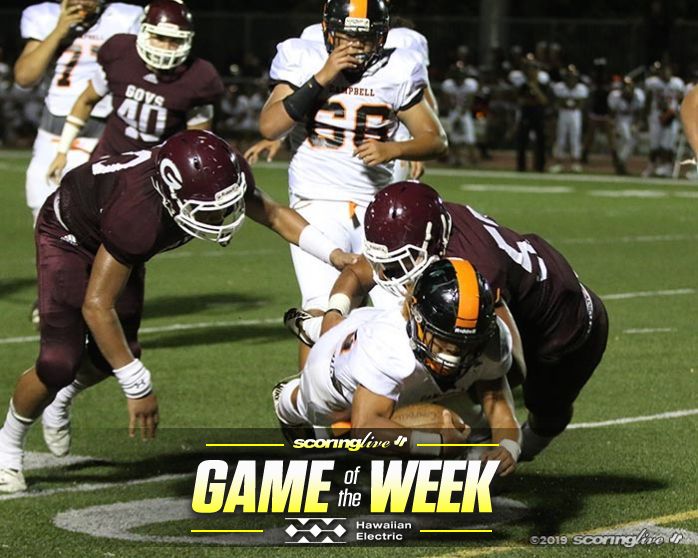 For the prep football players outside of the Interscholastic League of Honolulu, Oct. 15th might as well be Dec. 25th.

After a wait of nearly two years, the state's public school football teams will return to the gridiron with this weekend's opening slate of games. Friday's schedule includes nine games on three islands, including three Open Division matchups in the Oahu Interscholastic Association.

All three games feature ranked teams: No. 9 Waianae at No. 4 Mililani, No. 5 Kahuku at No. 6 Kapolei and No. 8 Farrington at No. 7 Campbell.

It's been a long time coming for the Sabers and their fifth-year coach, Darren Johnson. He is contrite when asked what he'll be looking for from his team against the Governors.

"Fun. Excitement. I expect them to play hard to the ball," he stated.

It's a similar approach for Farrington fourth-year coach Daniel Sanchez.

"First of all, we're just excited to get back to football and just play the game," Sanchez said. "We're just looking to get out there, play hard, play four quarters; there's gonna be mistakes, but how do we respond to our mistakes and keep going forward?"

The Govs are coming off a 2-9 season in 2019, when they finished at the No. 13 spot in the final ScoringLive Power Rankings.

Sanchez's squad will look to improve upon offensive averages of 9.6 points and 177 total yards per game. Its defense held teams to an average of 286.2 yards, but allowed 29.4 points per contest.

Sophomore quarterback Marcus "MJ" Moreno takes the reins of the offense, but will be without one of his top horses in running back Viliami Tongotea. The 5-foot-10, 200-pound junior had transferred in from Saint Louis, but ultimately moved to Arizona a few months ago. Sanchez said that Tongotea has played well in his time at Buckeye Union High School.

"He's doing his thing. I got to see some of his highlights and he's doing a great job out there," Sanchez said. "I'm happy for him, I'm proud of him and I hope he continues to do good."

While Sanchez is gracious with his words, Tongotea's departure is a big hit to the Govs offense, for sure. Tongotea was expected to be a workhorse back and a big part of the passing game as well. As Sanchez notes, it will take a combined effort to replace Tongotea's production.

"We're gonna go with several guys, by committee, run the ball and play Farrington football. It's just next man up," Sanchez said.

Farrington was dealt a blow to the defensive side of the ball when senior linebacker Torence Liufau transferred to Westlake High School, west of Los Angeles. The 6-foot, 210-pound Liufau was expected to anchor the defense along with fellow linebacker Syracuse Kahakai.

"We lost some guys to the mainland, we lost some guys just for personal reasons because they don't want to get vaccinated or tested, so I'm sure everybody is kind of experiencing a little of this, but it's been going. I mean, our numbers are not what we're used to having," Sanchez said. "We're probably less than 50 (players), I wanna say — that's where we're at, man."

As far as Johnson is concerned, the names are a formality when it comes to the Govs.

"I know they're big," he said, "and Farrington is Farrington — they're always good. You can never take anything for granted against them and they come from a tough, rugged neighborhood that puts out athletes."

Johnson's squad has also dealt with some adversity with personnel changes over the seven-week pause that finally came to an end on Sept. 24.

"We lost some kids and we just had to deal with it and just go by it, but we have a roster — Ewa is a big place, right? — so it's next man up and that's the way we look at it, next man up and with what we have and because of the pandemic, we try, we try to make things work and we try to make ‘em better because it's not going away, but at least we have something to fall back on," Johnson said.

"We think he's gonna come through and do big things for us," he said.

But the centerpiece for the Sabers is linebacker Blesyng Alualu-Tuiolemotu (6-2, 215, Jr.).

"The backbone of our whole team is Blesyng," Johnson stated. "He's played since he was a freshman and we expect a lot of things from him, not only his leadership skills, but we expect him to be a player."

Offensively, Campbell will also have a first-year starter at the controls in quarterback Shane Kuboyama-Hayashi (6-3, 170, So.), a Kapolei transfer. He fills the role left behind when Blaine Hipa left to finish his prep career in Arizona.

In addition to replacing the production of star wide receiver Titus Mokiao-Atimalala — one of the most prolific pass catchers in state history — the Sabers are also operating with a pair of new coordinators in Shane Masaniai (offense) and Kaikoa Kinoshita (defense).

Sanchez said that he elected not to have his team scrimmage another team last weekend — "We just wanted to get to the first game" — but he was able to review a bit of film on Campbell from its scrimmage against Kailua.

"I saw some film on them, but this is still Campbell. (Johnson) does a great job getting those guys ready and I know they'll be ready to go Friday night. I expect a tough game," Sanchez said. "It's usually a good game and we usually play each other well and I'm not expecting anything else. It's gonna be another battle out there."

Kickoff between the Govs and Sabers is scheduled for 7 p.m. Fan attendance is not permitted.