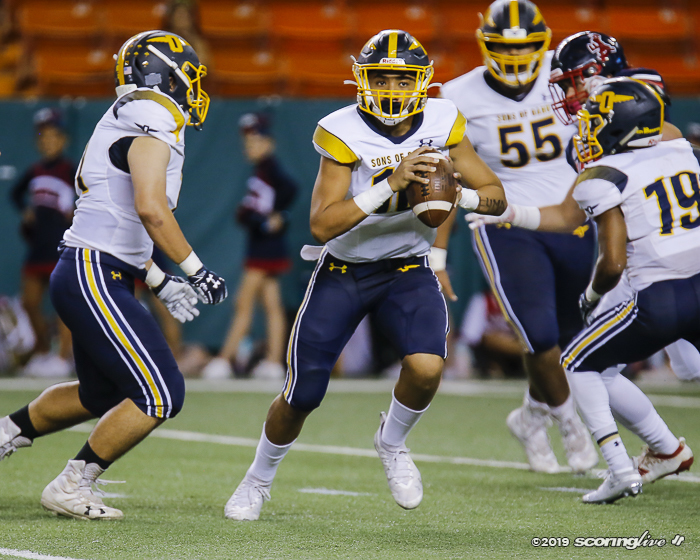 While the games have been few and far between for his team, Punahou football coach Nate Kia has found no shortage of resiliency among his student-athletes.

Saturday — fingers crossed — will mark just the second contest for his Buffanblu this Interscholastic League of Honolulu season, when they play host to four-time defending Open Division state champion Saint Louis in a mid-afternoon tilt at Alexander Field.

"Practice is going well," said Kia, the first-year coach of the fourth-ranked Buffanblu (1-0). "There's a little more focus now that we actually have a game that we're aiming toward — knock on wood, make sure nothing derails that plan."

It will be Punahou's first game since Aug. 27, when it rallied to beat Kamehameha, 33-28. It was originally scheduled to play Saint Louis on Sept. 3, but that game was postponed two days prior due to COVID-19 protocols.

"We were just talking about it with the players the other day, with the different changes and I don't know how I would have responded as a student-athlete to this," Kia said.

"I don't think I would have been as mature at handling the situation as these guys have. Yeah, there was some disappointment early on, but they understand that's the nature of trying to push forward and having games this season, especially with this season there's going to be some disruptions and things that will make us pivot real quick, so they've been outstanding in being able to weather all these changes and also being able to remain focused," Kia added. "They've been pretty unflappable throughout this whole thing, throughout this whole season."

Punahou was supposed to host Kamehameha this Saturday, but the ILH announced the schedule change early Sunday morning. Instead, top-ranked Saint Louis (1-0) will fill that slot, but Kia noted that given the nature of the season thus far, who the opponent is doesn't matter so much as getting the opportunity to play at all.

"It really didn't have much effect on us. We're still planning to play, we just flipped opponents and it kind of made more sense anyway the way it was set-up for us to play Saint Louis before playing Kamehameha twice, so it didn't really have much impact in regards to our team and everything. We're just glad that the remaining games got rescheduled on the back end, that was probably the better news of the whole thing," Kia said.

The game against Kamehameha back on Aug. 27 at Aloha Stadium was not only the first contest for the Buffanblu this fall, but also the first coaching victory for Kia, a 1992 Punahou graduate and former assistant under longtime coach Kale Ane.

"The Kamehameha game was good for us just to see where we're at. We didn't have a preseason game so there was a lot of execution things that we had to work on that we could see out there in their first live action, first game situation in 20 months or whatever it was, but it was good that despite not being perfect, they were able to show grit and pull out a win," Kia said.

Junior quarterback John-Keawe Sagapolutele threw for 382 yards on 27-of-42 passing with three touchdowns and no interceptions in the win over the Warriors. Astin Hange was his favorite target; the sophomore wide receiver pulled down 10 receptions for 211 yards and two TDs.

Saint Louis coach Ron Lee was among those who paid close attention to the Punahou-Kamehameha game.

"I was very, very impressed with Punahou in that game. They put up a lot of points, they moved the ball well on offense. They've got some really talented young guys and I think John is going to have a great year, he really showed a lot of improvement," Lee said of Sagapolutele, who started 10 games as a freshman in 2019 and passed for 2,135 yards and 16 TDs.

"They're well coached on offense and on defense they're young but aggressive. They line up right, they run to the ball, they're going to give us a really big challenge; we're going to have to play well to stay with them," Lee added.

Lee's own squad has not played a game since Aug. 20, when it fell to nationally-ranked Bishop Gorman in Las Vegas, 42-21.

Needless to say, his players are stoked for Saturday.

"Considering that we've been practicing forever and postponing, you know, the kids are doing a nice job of coming back week after week. We've been going for about five weeks now practicing and getting postponed, but when we came back on Monday I was pleasantly surprised how optimistic they were to be playing this game. We need a couple more practices to get ready, so we're looking forward to getting something going, hopefully to see where we're at," Lee said in a cautiously optimistic tone.

The 42 points scored by Bishop Gorman was the most surrendered by the Crusaders since Sept. 23, 2017, in a barn-burning 56-50 win over Narbonne (Harbor City, California).

"The Bishop Gorman game, we didn't play real well, but we're looking forward to getting an opportunity to see how we're doing now after three, four weeks," said Lee, who largely echoed Kia's sentiment about his own players and how they have handled the seemingly ever-changing schedule.

"Week after week the guys come back and they work hard after practice and after so many postponements, you would think they'd be going the other direction, but guys have been doing well and working hard and getting really anxious to play and so right now we're keeping our fingers crossed to get something going on Saturday," Lee said.

Kia had high praise for Saint Louis and its history of sustained success, but the focus in practice for Punahou this week has been largely about execution.

"Obviously they always have tremendous players and they're always well coached and they always execute as a team at a very high level," he said. "They have a standard that they consistently put out in regards to their quality of football that they play, so for us it's really about just the focusing on our execution to make sure that we can — because they're not going to make mistakes — so on our end we have to execute."

Since then, Saint Louis has taken seven straight meetings against Punahou, including both times the teams faced off in 2019, by scores of 25-19 and 21-14.

Kickoff between the Crusaders and Buffanblu is scheduled for 3 p.m. Saturday.

It will be the first ILH game held at Alexander Field — albeit with no spectators in attendance — since Aug. 16, 2019, when Punahou held off Kamehameha in a low-scoring affair, 15-5.

Kia's squad got a taste of playing on-campus during the spring, when it hosted Saint Louis in a scrimmage in early May.

"Yeah, we did and that was nice," Kia expressed. "It's always fun to play at home. — yeah, it's not quite the same when you don't have all the spectators — but still, you're at your school so you feel like you actually have a home game."

Punahou and Saint Louis will play again on Oct. 8 at Aloha Stadium in the penultimate week of the ILH regular season.

Kaiser gets defensive in 28-6 win over Kalani

Kamakana Mahiko and Caleb Garcia each had interceptions returned for scores to lift the Cougars.

The Crusaders put up 613 yards of net offense in their lopsided-win over the Wolfpack.

No. 1 Kamehameha rallies to edge No. 2 Saint Louis

The Warriors overcame an 11-point deficit and scored twice in the fourth to squeak by the Crusaders.

No. 7 Campbell roughs up No. 8 Farrington

Despite five turnovers the Sabers tallied 467 yards of total offense and built a 32-0 lead by early in...

Kahuku scores in all phases to roll past Kapolei