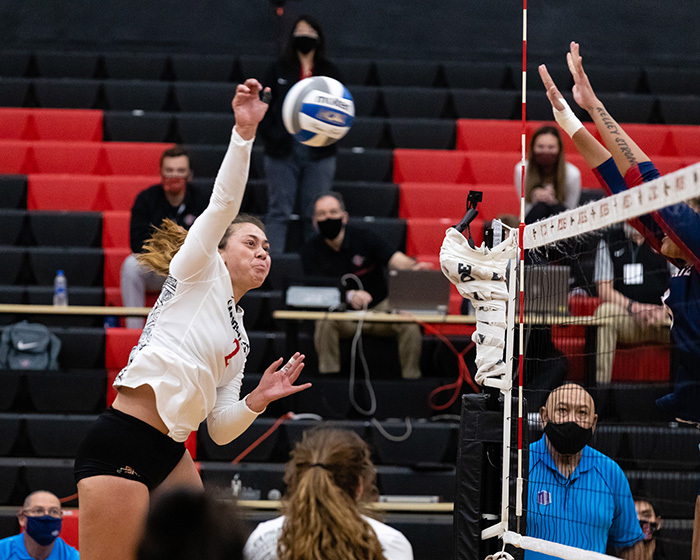 When one door closed for Heipua Tautuaa, Brent Hilliard and San Diego State were there to open another for the Waianae graduate.

And the rest, as they say, is history.

Tautuaa, a freshman outside hitter for the Aztecs (3-5), has made the most so far of a second chance, so to speak.

The 6-foot-1 Tautuaa has started all eight matches and played in all 28 sets this season. She is averaging 1.96 kills per set and her 55 total kills ranks second on the team. Tautuaa is also averaging 3.11 digs per set and has racked up 87 total digs, both good enough for second for SDSU.

But the union of Tautuaa and the Aztecs almost never happened. 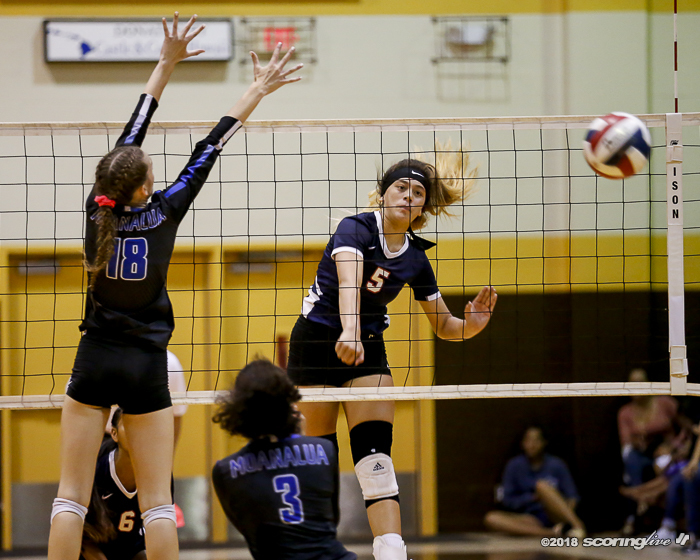 Back it up to 2019, when Tautuaa was in the midst of the first semester of her senior year at Waianae High School. After earning All-Oahu Interscholastic Association Western Division First Team and All-Hawaii Third Team honors as a junior, Tautuaa opted to sit out her senior season of volleyball with the Seariders. After all, she had already given a verbal commitment to Saint Mary's College (Moraga, California).

But then the unthinkable happened that winter.

"A couple weeks before I was going to sign with Saint Mary's, they gave me a call and said that most of my academic requirements didn't reach their requirements," Tautuaa recalled. "It wasn't enough for me to join the school, but it was good enough for me to play volleyball, so it was either get those up or find another school."

Tautuaa was willing to re-take the SAT test, but there were no openings to be found in the proverbial 11th hour.

"So I had to just de-commit from there and open it back up," she said. "And I'm glad Brent found me."

That would be Hilliard, who, for a long time, was an assistant at the University of San Diego. But when SDSU relieved coach Deitre Collins-Parker of her duties in December of 2019, Hilliard emerged as her replacement about a month later. In between that time was when Tautuaa received her bit of bad news from Saint Mary's.

Prior to the verbal commitment she gave to Saint Mary's, Tautuaa's second choice in a school was … that's right, the University of San Diego and the coach who recruited her there was … yup, Brent Hilliard.

So when he got the job with the Aztecs and learned that Tautuaa had re-opened her recruitment, he picked up the phone.

"He reached out to me like the end of February and I was excited that he did," Tautuaa said with a smile. "Everything happens for a reason."

But that period of uncertainty before she heard from Hilliard was difficult, to say the least, for Tautuaa.

"It was pretty tough because I cried — ever since I found that out I cried like every day and I was like, ‘I'm never gonna go to college,' like I was doubting myself and those kinds of things," she said.

Tautuaa noted that her coach with the Spike & Serve Volleyball Club, Kevin Wong, played a big role in assisting her find another option.

"He was helping me and giving me schools who were interested in me and seeing if I'm interested in them," Tautuaa explained. In fact, she added that her second choice behind SDSU was West Virginia because Mountaineers' coach Reed Sunahara "is a friend of coach Kevin and he's from (Hawaii) as well."

Tautuaa weighed her many options with mom, Brandy, and dad, Francis, before ultimately signing with Hilliard and the Aztecs.

"I chose SDSU because of him," she said.

"It's closer to home and it has Hawaii vibes as well. I like the weather here, the beaches and the people here as well, like when I came on my visit they were so welcoming. They were showing aloha like how we do in Hawaii and I loved it."

Tautuaa has taken a little bit of Hawaii — specifically, Waianae — to the San Diego State program. She is always eager to inform people of where exactly she is from.

"When people ask me where I'm from, I don't tell them I'm from ‘Oahu, Hawaii.' I say I'm from ‘Waianae, Hawaii,' and when they say my name before games and stuff — like when they introduce the players — they would say Waianae wrong or my name wrong and I would correct them, like, ‘No, it's WAI-ANAE,' so I take a lot of pride in that," Tautuaa said.

The adjustment to college life and Division I volleyball has kept Tautuaa busy for the most part, but there are still times that she gets homesick.

"I'm a very outgoing person so it was pretty easy for me to be out and away from my family, (but) the longer I've been here the more I've missed the island, I miss my family, got homesick, but I've found ways to adjust and help me get my mind off of that," Tautuaa said.

That includes going to the beach — "Even though the beach isn't as nice as ours, but it still reminds me of home," she pointed out.

All of Tautuaa's classes have been online, which she is still getting accustomed to.

"I would say the most challenging part for me is trying to balance online school with volleyball practices, because now that that's my main two priorities here it takes up most of my time and I need to learn how to time-manage it and adjust my schedule around to volleyball, especially when we travel and stuff, but I feel like I've got help up here to help me schedule when and what I gotta do with school and volleyball," she explained.

If the numbers are any indication, it seems that Tautuaa is finding her groove on the court. In a four-set loss to Nevada Friday, she recorded a career-best 15 kills with nine digs, four assists and one assisted block.

"I would say we started off pretty well for our first time together as a new group and with a new coach, but I feel like the more games we play the more we build chemistry together and the more that we could figure out what is best for our team to win games. I feel like with every match I play, the less mistakes I made the more my percentages go up," Tautuaa said. "I feel like I'm learning from each game."

Tautuaa is appreciative of the opportunity that Hilliard has given her to play significantly as a freshman, at the same time understanding that she has much room for growth still.

"I'm happy and I'm grateful that he puts me in even though I'm a freshman, and of course I'm going to be inconsistent, but this is a way of me learning and growing through my years because this is my freshman year and I've got three more years here after this and next year, my sophomore year, I'm going to already know how the game works and I'm going to make less mistakes than I am as a freshman and he wants me to learn, he trusts me to make mistakes, but good mistakes as a freshman and he's going to take that as me learning to grow better throughout my next years with him," she said.

As far as Tautuaa has come in the sport, she is still a relative newcomer to volleyball.

"I started playing volleyball seriously my freshman year of high school. I was more involved with basketball and softball because those were my two main sports that I played and I only played volleyball because my mom started coaching and I just found out that I love volleyball more," Tautuaa said.

Volleyball is a family affair for the Tautuaa's. Heipua's mom, Brandy, along with her dad are coaches at Waianae High. Younger sister, Haiti, is a sophomore setter for the Seariders. Brandy was a volleyball player in her own day at Waianae, but it's Francis who Heipua says has been the biggest influence on her volleyball career.

"He was pretty much my first coach and my coach til now. Even though I gave him many reasons to give up on me and just stop already trying to push me to be the best, but he still stayed with me and that inspired me to do better for him," Heipua said of her father, an engineer at the Ko Olina resort who is originally from Tonga.

"He's working his butt off just for me to be someone special in the future and even though he has other things to do with his job and he has to work with my other siblings, he still makes time for me. He still helps me work out, helps me fix what I need to work on in volleyball, he watches film on me all the time and then he calls me and he yells at me what to fix and stuff," she laughed.

Tautuaa doesn't shy away from talking about the difficulties she has faced — much of them self-inflicted. Instead, she has grown from each of her missteps and knows that there is much that still lies ahead of her.

"I would say high school was pretty tough because I had a lot of bumps in the road trying to get to where I am right now," reflected Tautuaa, who also played two seasons of basketball and one year of softball in high school. "Volleyball-wise I would lose passion for the sport because of one bad game or the coach and I would make poor decisions in school and I would have to learn from that, (but) I would say everything happens for a reason and I'm glad that I found a way to get out of that nutshell to become a better person and get here today."

San Diego State was picked to finish fifth in the 11-team Mountain West Conference in a preseason coaches poll.

Tautuaa and the Aztecs lost their first three matches to open the year before winning three straight, but dropped both matches against Nevada last week. They are in a three-way tie for seventh at the mid-point of their 16-game schedule and hit the road for a pair of matches at Wyoming this weekend, which can be viewed free online on the Mountain West Network. Match times are 3 p.m. Friday and 9 a.m. Saturday, both times Hawaii.