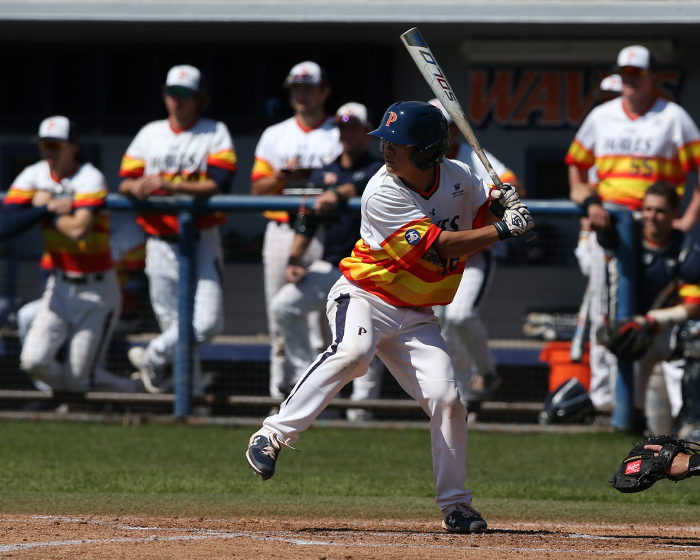 For Wyatt Young and the Pepperdine baseball team, it's finally go time.

Nearly a year after Young and the Waves had a promising 2020 season canceled due to the onset of the COVID-19 pandemic, they'll make their long-awaited 2021 debut this weekend against Cal Baptist to kick-off a 47-game schedule.

"We were pretty lucky to get some good match-ups," said Young, a junior shortstop and 2018 Mid-Pacific Institute graduate.

The three-game slate against Cal Baptist will be the first of four non-conference weekend series for the Waves leading into West Coast Conference play. They also have four-game series lined up against Big West Conference teams UC Santa Barbara and UC Davis, as well as a stretch of four games in five days that will see them play UCLA, Cal State Fullerton and UCLA (twice).

"Those are top-tier teams," Young noted.

He said the benefits of the schedule — beyond facing quality competition — was also less travel and consequently, less potential exposure to the virus while in transit, at airports, hotels and the like.

"There's a lot more teams in California on the schedule and with all these regulations we obviously want to minimize our travel out of state as much as possible," said Young, who has started all 64 games in his Pepperdine career.

He has watched as other teams within the Waves' athletic department have had their schedules greatly affected by cancelations or postponements, some of them called off altogether.

"That's the greatest fear and if anything's going to throw us off, it would be that," Young cautioned. "We've done a good job of handling it so far and so hopefully we can keep that up."

If the Waves can navigate clear of COVID troubles, there is much reason to be optimistic about their chances. They lost just one player from last year's team, which won its first seven games en route to a 12-3 record and was ranked as high as 14th nationally before the season was cut short. In all they return 31 players from their 2020 squad and are bolstered by the addition of a dozen freshmen.

"Luckily we're returning pretty much our entire roster from last year, obviously added freshmen in there, which are going to be a big help for us, but I mean, yeah, we had a great chance to win it last year," Young said.

Pepperdine was projected to finish fifth in the WCC last year. It has not won the conference tournament since 2014, but was picked by league coaches as the preseason favorite in the 10-team WCC this spring.

"I believe we were gonna win it and we were gonna go pretty far in the postseason and I'm pretty sure the exact same thing is going to happen this year, but in the clubhouse we're not thinking about that at all," Young said of the prognostication. "It's just game by game, just trying to win each game and knowing that we're good enough to do so and we're just keeping those things in mind and not trying to do too much at one time and just going day by day."

That's the same approach that Young has always taken to the game. At 5 feet, 7 inches tall, he's often been overlooked due to his size, but Young does not let it deter him.

"I think there's always going to be a chip on your shoulder, but at the end of the day I know that I can play at the highest level and I know that there's guys doing it and there's guys that have done it before me and so I'm just focusing on getting better each day, not listening to those who say that I'm too short, that I can't play, because I know that's not true," Young said. 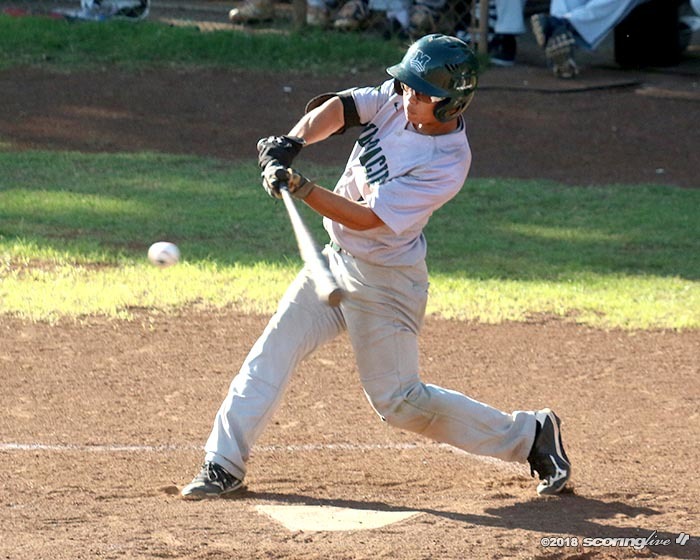 And the numbers certainly back that up — all the way to his days at Mid-Pac. Young batted a blistering .468 during his senior season, when he was tabbed as Interscholastic League of Honolulu Player of the Year and a First Team All-Hawaii selection.

It was at Mid-Pacific, under venerable coach Dunn Muramaru that Young learned the most important lesson of his prep days: work ethic.

"That's one thing I kept throughout high school and up until now," said Young, who didn't see any playing time as a freshman or sophomore with the Owls.

"That was kind of an eye-opener and so I knew I needed to work hard and I worked with coach Dunn countlessly and we made things happen, but just keeping that work ethic up until college because I know that's how I got where I am and trying to use that to fuel me hopefully to the highest level there is," he added.

It didn't take Young very long to adjust to the collegiate level once he got to Pepperdine. He started every game of the 2018 season at second base and ended up finishing with a .319 batting averaged and a team-best 67 hits on his way to All-WCC Freshman Team honors. Then, in the summer, opportunity came knocking when Young inked a temporary contract with the Yarmouth-Dennis Red Sox of the prestigious Cape Cod League.

"That was one of the probably best collegiate experiences so far, just because of the competition," Young said of what is considered the premier summer collegiate league.

"Obviously I did well and that helped a lot in the experience, but I wasn't originally supposed to go there for the entire season. I was a 14-day contract, or temporary contract player, but I ended up doing good from the start and I was able to land the starting shortstop job from the beginning," he explained.

Young did well enough, in fact, to earn the nod as the starting shortstop for the Eastern Division in the league's all-star game.

"It definitely did boost my confidence a little bit and let me know that I could play with the big dogs because all those guys in that league are top of the top, cream of the crop and so you know, just trying to build off of that, knowing I can play with them and just trying to dominate year after year," added Young, who batted .338 that summer.

As a sophomore last season, Young, who bats in the leadoff position, slid over to assume the starting shortstop job. He put together a .299 batting average in 15 games in 2020.

"It was obviously a dagger to the heart just because of the way we got off and this team had a lot more chemistry than my freshman year, I believe, and so I think that was a big help in doing so well and obviously the talent was there, but it was just a big, big family," Young said.

He added, "This year I guess we're kind of juggling the same things. We don't know how COVID is going to take us in terms of the season, but it's just going back to that day-by-day thing and doing what we can to make sure that we stay in our little bubble and not have any positive tests because if we have those players will have to sit out for 10 days, two weeks — whatever it is — and any player that has been around them would have to sit out, too, and so things could easily go bad if that were to happen so we're trying to make sure that doesn't happen this year."

As much as Young is keen on taking things day by day, he admits that this summer's Major League Baseball First-Year Player Draft — for which he will be eligible — is on his radar screen.

What day is it again? Oh yeah, it's #GAMEDAY!!! The Waves open their season tonight against California Baptist at 6 pm! #WavesUp | #UnfinishedBusiness pic.twitter.com/w3SgRdevkL

"Oh definitely, it's something I'm looking forward to. I try not to think about it too much, obviously just trying to focus on the season, but yeah, it's there," said Young, who is majoring in sports administration with the hopes of a career in baseball.

"Pretty much anything in the baseball world. Obviously I want to play as long as I can, but after that I already know I'm going to stick around somewhere in the baseball coach, whether that's coaching, honestly, I don't know. Sports administration has a lot of jobs on the business side of sports, the sides that you don't see and so I could see myself there also, but I want to stay on the field as long as I can," Young said.

Eventually Young wants to help youngsters from his home state realize their dreams of playing baseball in college and beyond.

"It was really hard getting recruited out of Hawaii, making those trips to Arizona, all those types of things because nobody can come see you and so that means a lot to me and that's probably where I want to do some of my work is trying to help players from Hawaii make it to whatever colleges they desire," he said. "I know it's hard and I know even with the skill level — we have great talent in Hawaii — but it's not always seen and so I want to do my best to try and bridge the gap somehow."

Young himself has benefitted from the path laid out by Big Leaguers from Hawaii like Kolten Wong, Kurt Suzuki, Shane Victorino and most recently, Isiah Kiner-Faleta — a 2013 Mid-Pacific graduate.

"I've been able to see him, before COVID we would take ground balls every once in a while at Mid-Pac — coach Dunn would hit and everything — but I think I was an eighth grader when he was a senior and so we didn't have a strong relationship at all, but I definitely have gotten to talk to him and obviously play with him a little bit, but seeing him on the big stage, I think for every kid in Hawaii that's something great," Young said. "Obviously you have Kolten Wong, you have a bunch of other players, but it's just always nice seeing another Hawaii kid make it and it inspires me, I'm sure it inspires a bunch of other kids from Hawaii and I hope to be there one day too inspiring other kids."

Young and the Waves open their 2021 season Friday at Cal Baptist. First pitch is scheduled for 4 p.m. Hawaii time. The teams will meet in the second game of the series Saturday, 10 a.m. in Malibu, before returning to Riverside for Sunday's series finale at 11 a.m.