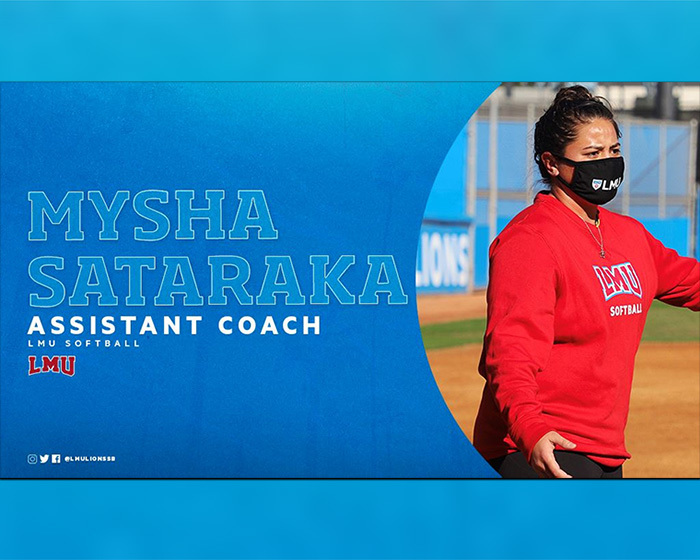 For all that Mysha Sataraka has achieved on the softball diamond, coaching was one thing that she never envisioned for herself.

But with an undeniable love for the game, the 2012 Punahou graduate and former All-American at UCLA has fully embraced being on the other side of the chalk.

After a decorated playing career that included three All-Pac-12 Conference selections and two trips to the College World Series, Sataraka is now in her fifth season as an assistant at the Division-I level.

"To be honest, no, I didn't really think coaching was in it for me," Sataraka said via telephone call Tuesday afternoon.

Sataraka's pathway into coaching was largely paved by another former Bruin in Tairia (Mims) Flowers, who was in the midst of a 10-year run as coach of Cal State Northridge. The two first crossed paths in the summer of 2013, when Sataraka had just completed her freshman year at UCLA and was selected as one of 17 members of the USA Junior Women's National Team, for which Flowers served as head coach.

Flowers, who was a two-time All-American at UCLA and helped the Bruins win the national championship in 2003, as well as an Olympic gold medalist with Team USA in 2004, was among those that Sataraka would rub elbows with on the Westwood campus as part of what she called, "the Bruin bubble."

"It's a real thing where everyone kind of gets together and can connect with each other and the networking is unreal, but we have that connection," said Sataraka, who holds a degree in political science. "At UCLA it was amazing just having the opportunity to compete for national championships every year and the ability to get that education, get that degree as well and it's also how I met my current boss."

The pair reconnected in 2016 when Sataraka had recently completed her collegiate eligibility and was pursuing a spot on the U.S. National Team. After participating in a 40-person selection camp, Sataraka was selected to the USA Elite Team — essentially the second team behind the National Team — and once again, Flowers was her coach.

"I got to get some USA experience, just playing international it's unreal just to see what softball is like around the world," Sataraka said. "Even in Hawaii, you get so caught up with what softball is like in Hawaii and then you go and play on the mainland and then next thing you know you're playing against different countries and you're seeing the way that they play ball, it's so much to learn."

After the USA Elite Team wrapped up its exhibition slate of games, Flowers then extended an offer to Sataraka.

"I was still training to make the national team so she offered me a volunteer assistant spot at her school so I could train, use the facilities, be around softball and get some work in," Sataraka recalled.

She joined the CSUN staff in the spring 2017 season and "from there, I fell in love with it.

"It wasn't so much the softball part of it," Sataraka explained. "It was more just watching student-athletes grind and you go in there with them, but when it clicks and you get to celebrate that with them, that's the moment I realized I like this. I do love softball, but it's kind of beyond that."

Sataraka spend the summer of 2017 playing for the Texas Charge of the National Fastpitch Softball League before she was promoted to a full-time assistant by Flowers that fall.

It wasn't difficult for Sataraka to adjust her approach from that of player to coach. Just as she did during her playing days, Sataraka found ways to make it work for her student-athletes.

"You just gotta work really, really hard. I had to make a lot of adjustments and I had to do a lot of different things because different coaches wanted me to do different things and it's kind of the same thing when I coach. I don't make it cookie-cutter. If it doesn't work for them, then you try something else, but don't quit or get frustrated and I think that's the fun part is that there's so many ways to connect with them," Sataraka said. "You can show film, do certain drills, have them visually looking somewhere to get what you want — it's like a puzzle, or like a game, I think you can call it — so that's the fun part about coaching, I think."

Then, in October of last year, Flowers was hired away from CSUN by Loyola Marymount. For about a month, that left Sataraka in limbo.

"When she decided to take the job we had conversations, but obviously she needed to do what she felt is best for her and best for the program, so I was weighing my options as well — is coaching really it for me? What is my next step? — and for about a month or so I was letting things play out," Sataraka said.

Not long after that, Sataraka got the call that she was hoping for. Her hiring was announced by LMU on Nov. 16.

"Obviously I'm very grateful she gave me that call and she reached out and that I continue to be under her," she said.

"On the coaching side, it's been a shorter stint, but I've known her for a long time. She treats me like family and for any local girl, it's a big thing. We're very loyal and when people treat us like family — you know, it's amazing, pre-COVID, she would invite me over to her house and I'd spend time with her family. It's been amazing and that's why I'm super loyal to her and it's an honor to coach under her."

It's a little bit, but not much of a change in scenery for Flowers and Sataraka, who made the short move from the CSUN campus — smack-dab in the middle of the San Fernando Valley — some 25 miles south on the 405 freeway to LMU — located a mere stone's throw from LAX international airport.

"It's about a thirty-minute drive with no traffic, but it gets up to about an hour-thirty with traffic," Sataraka pointed out. "But other than that I'm just kind of getting a handle with the new team, new coaching staff as well, so getting used to each other, new conference and then the craziness going on with COVID and what we've got to do to stay safe and make sure we get the season in. It's been kind of crazy this season the kind of different things we've got to do this year, so just a lot going on, learning a whole new way of doing things, I would say."

Los Angeles County, where both LMU and CSUN are located, has been among the nation's hardest hit by the coronavirus — a fact always at the forefront of Sataraka's mind these days.

"It's the sensitivity of everyone's health, so at the end of the day trying to make sure everyone is safe and healthy — that's always the number one priority — and then after that it's trying to get this season in for these student-athletes," she said. "So we're taking all precautions, spacing out in the dugouts, wearing masks, all the little things that we just want to make sure we're on top of and make sure we're taking care of so that we're safe and healthy and make sure we can get this season in because they've trained hard and worked very hard for it."

The Lions, a member of the West Coast Conference, had five successful seasons under former coach Sami Strinz-Ward, including a 40-win season in 2019. The three-time WCC Coach of the Year departed for the Texas Tech job in early October.

"What we're trying to do is build a winning culture on top of what we have," Sataraka said. "There's been success so there is that foundation, we want to build on that. The long-term goal is to make the postseason, actually that's the goal every year."

Part of Sataraka's own foundation was laid during her time at Punahou, where she starred in both softball and basketball. She was a three-time all-state selection in both sports and was inducted into the HHSAA Hall of Honor as a member of the class of 2012.

"I'm very grateful for what I was surrounded by and what the supporting staff around me helped me with. I had a lot of help, whether it be coaches or my old friends and teammates from back then," said Sataraka, who has an even greater appreciation for multi-sport athletes now that part of her job entails recruiting.

"Being a two-sport athlete, I wouldn't trade that. I wouldn't want to only play softball and I wouldn't want to only play basketball and I think that makes local kids — when I watch — have an advantage. Just being athletic and raw in a good way, in a sense that they're not so mechanical and they just go out there and play," she added. "Being a two-sport athlete helped me be maybe a little more athletic when I got to college."

Sataraka admits it's been "a minute" since she's been able to come home, but Hawaii is never far from her heart.

"What I love and is so awesome to see is just how much more prevalent Hawaii athletes are in the softball world. I was never the first person to do it, there were so many before me who paved the way to go out and showcase their softball talent, but nowadays there are so many players from Hawaii afar and doing big things and honestly, it makes my heart happy," Sataraka said. "It's awesome to see how it's growing and hopefully more of them stay in the coaching realm and now I get to go see Hawaii recruits all the time too, so it's kind of full circle, like, gee, I was once that kid."

LMU will make its debut under Flowers this weekend. Sataraka and the Lions will host Cal Poly for a doubleheader Friday, Fresno State for a twin-bill Saturday and a single game against Oregon State Sunday.

The following weekend they host Cal State Fullerton for a Friday doubleheader before their first road trip of the season Sunday — albeit a short one: UCLA.

"Any time I can get back on campus it is awesome," said Sataraka, a two-time NFCA All-West Region player for the Bruins. "It brings back a lot of memories and they're only growing from here after winning the national championship in 2019, so getting to see some of the new talent and old faces coming through, seeing my previous coaches who I owe a lot to, so it's always a good time going back home."

Even though she'll be in the dugout and not on the field, Sataraka will surely enjoy the view.

"I miss it," she said of her playing days. "That's why I'm still here coaching. It's the closest thing you can get to playing, I believe."