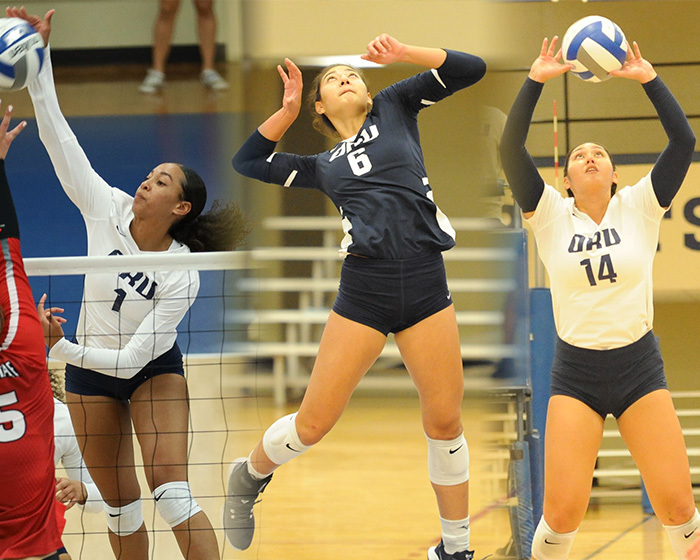 Some good Hawaiian food might be hard to come by in Tulsa, Oklahoma, but there's a definitive local touch within the Oral Roberts University women's volleyball program.

The state of Hawaii is well-represented by a trio of local products for the Eagles in sophomore Jeslyn Spencer, a 2019 Moanalua graduate, and freshmen Kaia Dunford and Bryanne Soares, a couple of class of 2020 alumnae from Punahou and Kamehameha, respectively.

All three players were in the starting lineup for ORU's season opening match at Missouri State on Jan. 22.

"I definitely appreciate having my two best buds from Hawaii on the team," said Dunford, as she draped her arms around Soares and Spencer during a recent video call.

Soares came off the bench the following night and had eight assists and seven digs in a three-set loss to Wichita State. Spencer led ORU with nine kills, six digs and an ace and Dunford added seven kills, four digs and an assist.

"I think it just allowed us to finally play someone else," Dunford said of the opening weekend of the season. "Our team is really young, half our team is freshmen and sophomores, so underclassmen, and even for the returners the last time they played a game was a year ago, so I think it just allowed us to see how we react as a team in an actual competitive environment and obviously it didn't turn out how we wanted, but we can see what we can work on and just be ready for our conference match at the end of the week."

ORU is coming off of an 8-23 record last season, including a 4-12 mark in Summit League games. It was picked to finish seventh out of nine teams in a preseason poll of conference coaches, but the promotion of assistant Frank Craig III to head coach in March of last year has brought a renewed enthusiasm amongst the players.

"Oh yeah, we're going to win this league. We're gonna be number one," Spencer proclaimed. "We're the underdogs, but we're gonna take this, especially with the coaching staff that we have and the players and how well we jell on the court; as long as we stick together and trust the process, it's easy."

Spencer said the preseason coaches' poll is of little consequence to the team — or its' confidence level.

"Well, we have to be confident, I feel like. We can't come into the season feeling bad for ourselves because we were seventh in the poll, because I feel like we're a lot better than we were last year — not to down our last year's team or the coaching staff or none of that — it's just the vibe that we're getting from this team, I feel like we're a real strong team," said Spencer, who appeared in 15 matches and averaged 0.82 kills per set as a freshman last season.

"Granted I was on the team, but I felt like I wasn't doing enough, but I think with the coaching staff this year and the team that we have this year, we have a good chance at flipping the script and doing a lot better than we did in the past years, just based on our coaching staff," Spencer added. "They bring a positive energy to every practice. You can never tell when they're having a bad day. Anything outside of the court stays off the court, it's strictly volleyball when we get to practices and I think that's something that will help us in the long run during season."

Craig, who has been on the ORU coaching staff the past five seasons, has ties to Hawaii as well. He briefly lived in the 50th state and attended Kapolei High School before eventually moving back to the mainland.

Spencer said Craig's presence helped her from getting too homesick during her first year at ORU, which sits at the southern edge of the city of Tulsa and is bordered to the southwest by the Arkansas River.

"My freshman year there was nobody from Hawaii on the team other than Frank and I kind of felt like I related to Frank the most out of the coaching staff and the team just because he lived in Hawaii for a little bit. I feel like he understood how I felt being away from home, how it was kind of hard at first, but he made it feel like home away from home and that's what I try to do for them because I know it was real hard my freshman year," Spencer said of Dunford and Soares.

All three are all-in on Craig, who began with the program as a graduate assistant. After three years in that role, he was promoted to a full-time assistant and recruiting coordinator in 2018. When longtime Eagles coach Sheera Sirola resigned after 17 seasons last year, Craig was hired as her replacement.

"I think the culture that we've established with a new coaching staff this season has been incredible and mind-opening," Dunford said. "Even the returners have said it's something totally different from what they experienced in the past and I think having such a young team and having us all be newcomers, we don't really have as much pressure to do as well and we're just focusing on growing as players and growing with each other and doing the best that we can do."

Soares, who is majoring in biology with a concentration in health professions, said she appreciates the open channel of communication she has with Craig and the rest of the coaching staff.

"As a setter it takes off a lot of pressure on me, because I'm told to run the court, but I feel comfortable saying when I need help with something, or I don't know what to do in a situation and I can easily talk to them and they won't get mad at me for making a mistake. They encourage mistakes, they want me to learn from it and having that constant push for me, just getting better and better, I really appreciate that as a player," she said.

But the appreciation goes beyond just volleyball and extends well off the court as well, noted Dunford, a biology major who hopes to also minor in psychology.

"I know that all the coaches on staff cares more than just about what I'm doing on the court and how I'm performing. They genuinely care how I'm doing in school, if I'm feeling stressed and just how I'm developing as a whole person," she said. 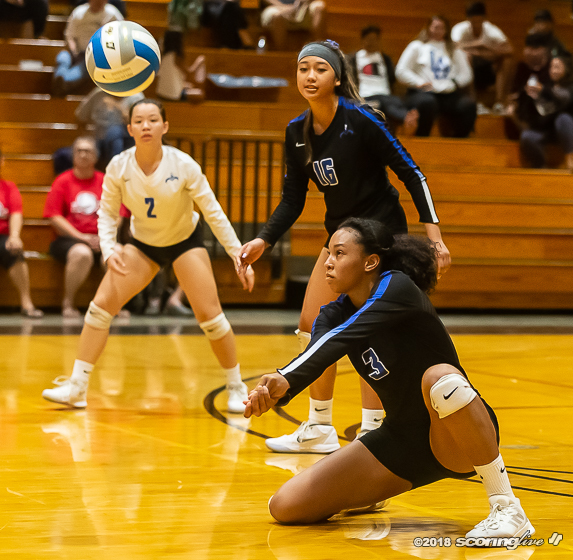 Spencer, a social work major, added that Craig and the coaching staff have been working diligently to establish a culture of family and unity.

"I feel like he's doing a really good job at training the coaching staff so that we're not just focused on volleyball and only doing volleyball, but he's also focused on the growth of us as young females growing into women, as students, as athletes, as people, spiritually, mentally — all of that. He's just doing a great job," Spencer expressed.

Spencer earned All-OIA East First Team honors in addition to All-Hawaii Third Team recognition as a senior at Moanalua. She was recruited to ORU by Craig, who observed her during a club practice while in Hawaii. When Dunford took her on-campus visit the following year, Spencer served as her host.

"That was the first time I actually met her," Spencer laughed. "Granted I always knew of her, but I never personally knew her until she came here." 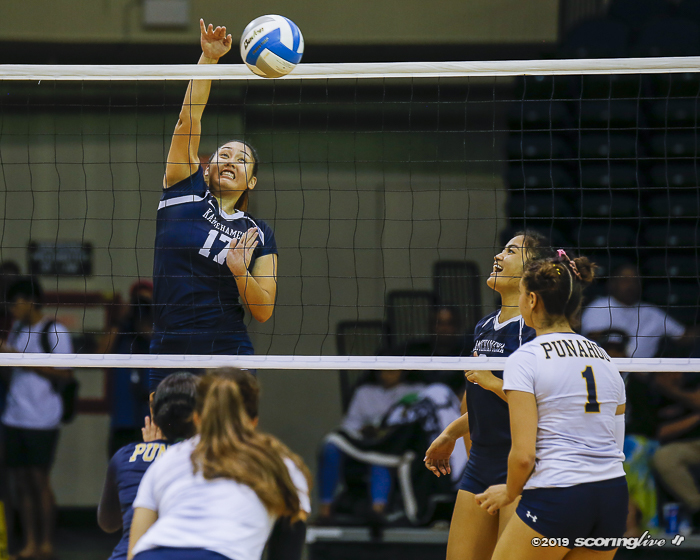 Dunford and Soares, however, knew each other quite well before becoming teammates in college. In fact, they were on opposing sides of the net in the final match of their high school careers, when Soares and the Warriors defeated Dunford and the Buffanblu in four sets in the 2019 Division I state championship match at Blaisdell Arena.

"Oh, I bring it up all the time," Soares laughed.

Dunford took the ribbing in stride.

"It hurts a little bit, I won't lie, but it's whatever," she laughed. "It's funny because when we came to campus and people would ask us — because it's so weird for people to have girls from Hawaii — that they're like, ‘Oh, did you know each other before?' And it's like, ‘Yes, I actually played my last match against her,' so it's really funny and even our coaches like to joke about it, (but) it's in the past."

Both were named to the all-tournament team at states that year. Soares was selected an All-ILH Second Team all-star and All-Hawaii Second Team, while Dunford earned both All-ILH and All-Hawaii First Team honors.

Regardless of what's behind them, the local contingent is eager to make their mark moving forward together at ORU. 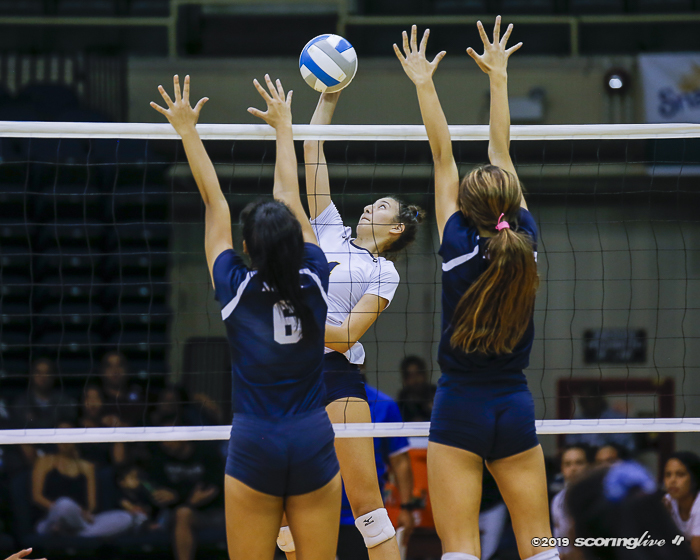 "It is really neat and that's what makes our program so different, is that we come from a place where defense is everything and being a team and being the underdog is such the norm for us, which I think is what makes our culture so much better," Dunford said.

There is no doubt that the triumvirate from the 808 appreciates one another, but there is one thing that Spencer desperately longs for.

"I personally miss the food," she said. "Not to diss the food here, but there's nothing like lau lau and poi and poke on the weekends."

Spencer, Soares, Dunford and the Eagles begin conference play with a pair of home matches against North Dakota this weekend. The teams will play Sunday at 2 p.m. Hawaii time and Monday at 3 p.m. Both matches will be streamed live and free of charge at ORUathletics.com/watch.