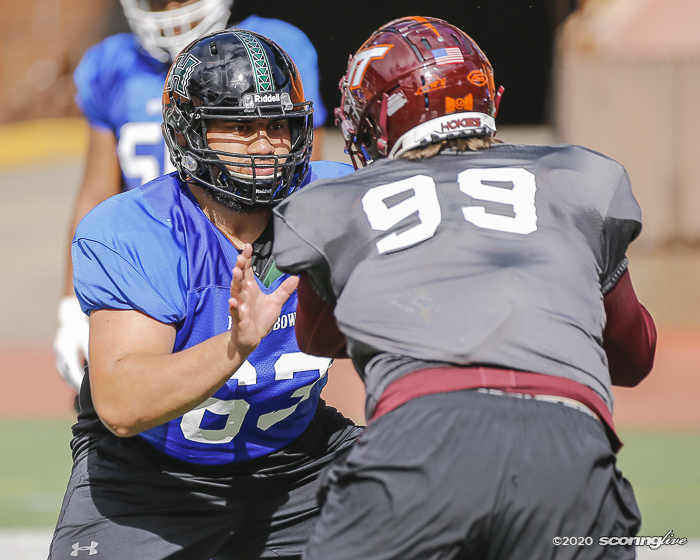 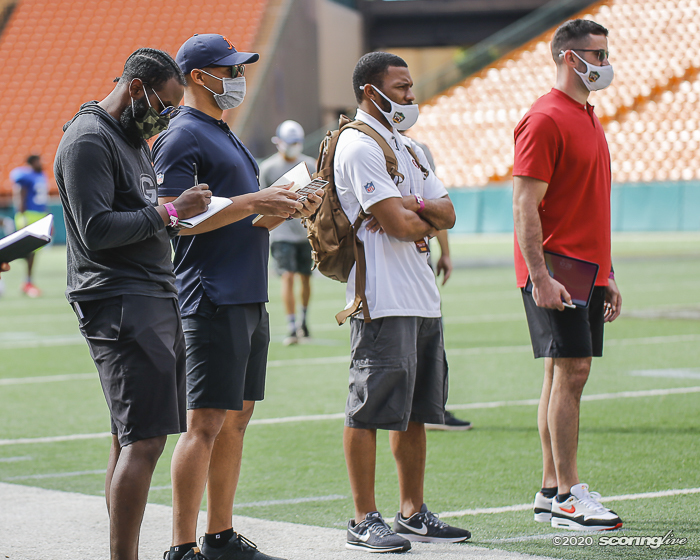 For three years from the sixth to eighth grades, Taaga Tuulima caught The Bus every weekday from his family's Ewa Beach home to and from Iolani School.

"Every morning," he said. "It was the (route) 101 if I made it, or if I woke up late I'd have to go down to the 91 bus, but when my dad starting working in town I was fortunate enough to catch a ride with him."

And each day Tuulima would gaze at a familiar sight passing in the window: Aloha Stadium.

So the significance of Sunday's Hula Bowl — possibly the last football game held at the 46-year old facility — is certainly not lost on Tuulima, a former Iolani and University of Hawaii offensive lineman who is among a hundred or so college football players participating in the all-star game.

"That means everything to me," said Tuulima, a member of the Kai team this week. "I mean, not only the way to school but also the way coming back from school, we'd always pass the stadium and see the lights, so it means a lot to me to maybe play in the last game in Aloha Stadium."

Tuulima is among two players from UH in the game (wide receiver Rico Bussey is also on the Kai team, coached by former New York Jets coach Rex Ryan), but the only individual in the game who played high school football in the 50th state. That isn't something Tuulima is taking lightly.

"I think this game means the most to me out of everyone here," said the 6-foot-2, 310-pound Tuulima. "I take a lot of pride in being the only local boy, born and raised in this game, especially since I played for UH."

Earlier this month Tuulima announced that he would not be returning to UH for the 2021 season, despite the fact that the NCAA has issued a blanket waiver that grants all fall- and winter-sport student-athletes another year of eligibility.

Not long after that, Tuulima was extended an invitation to participate in the Hula Bowl by executive director Rich Miano.

"To have a guy like Taaga Tuulima, who you just watched as a walk-on, you watched get better each and every year — he got bigger, strong — we always knew how smart he was and to watch him become the leader of that (UH) football team, being the center and with his growth, I thought it was a no-brainer for the Hula Bowl," said Miano, who serves as a color analyst on Spectrum Sports' television broadcasts of University of Hawaii games.

Like Tuulima, Miano began his UH career as a walk-on before eventually earning a scholarship. Miano played in the 1985 edition of the Hula Bowl before going on to an 11-year NFL career. He sees this week's practices — which are conducted in front of approximately several dozen pro scouts — as well as Sunday's game, are golden opportunities for a guy like Tuulima to shine.

"The opportunities to play in the National Football League are so slim, but this — in front of 50 to however many scouts are in attendance, as well as tape of every practice and the game goes to the NFL and all 32 teams — so this is going to be his best exposure because the kids from Hawaii, they're a little bit logistically-challenged especially this year in COVID because the scouts weren't on campus, they didn't have as many road games, they didn't have as many football games, so this is a great opportunity for anybody to get in front of scouts one last time," Miano pointed out.

G.J. Kinne, who completed his first season as offensive coordinator for the Rainbow Warriors last month and is coaching the Kai team's tight ends this week, spoke glowingly about Tuulima's importance to the UH offensive line.

"He was definitely a leader for us up front. He's a guy that always knew what to do, super intelligent — I think that's why he's going to have a chance at the next level, is because of his intelligence," Kinne said of Tuulima, a three-time All-Academic Mountain West Conference selection.

"He loves football, he's great team guy and he's demonstrated that this week even with these guys — getting guys in the right place, helping the guards know exactly what to do, making sure everyone's on the same page — so he's definitely a leader and it's shown out here," Kinne added.

Leo Goeas, who played 111 games over eight seasons in the NFL as an offensive lineman, is Tuulima's position coach this week. Through the first two days of practices, Goeas saw much the same that Kinne saw in Tuulima, who primarily played center at UH.

"First impression is he's just a great kid and very coachable, very humble and technique-wise very solid," Goeas said. "You can tell he's had a lot of good input from some good coaching, it just jumps out. You see him going through drills and competing one-on-one and he holds his own against pretty much everybody and it's just going to be a matter of if somebody gives him a chance." 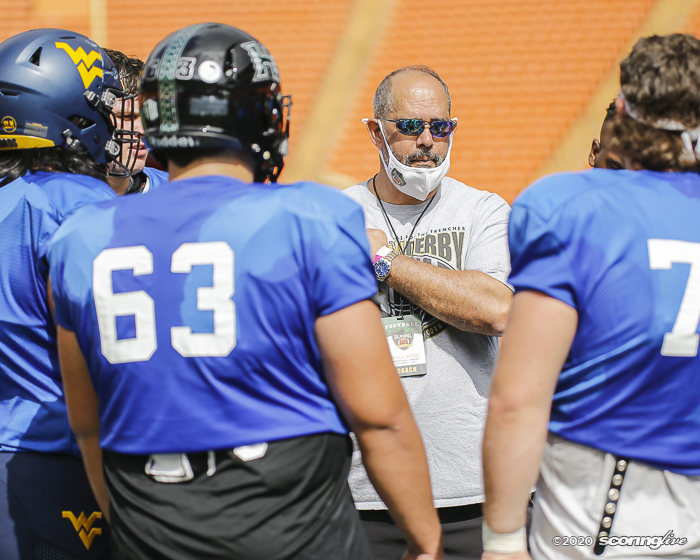 Goeas, formerly an agent for several NFL players with Hawaii ties, said that while it's unlikely Tuulima will get drafted, he would not be surprised to see him sign a free agent deal with a team.

"He's extremely smart and he has an understanding of not just technique, but scheme and he's shown himself to be a true leader. You can see him telling everybody what they've got to do; that's what a center does and he does that. He's got intangibles that you can't coach and he's real eager to learn, which is a breath of fresh air for me because it just makes everything go a whole lot easier when you have a player who is that way. I love the kid. I wish him nothing but the best and I think he will and should get an opportunity," Goeas said.

Fighting for an opportunity isn't new to Tuulima, who has had to battle to keep the starting center job in each of the past three seasons at UH.

"No one's going to outwork him, no one's going to out think him, he's going to let his performance, his work ethic, his energy prove his worth to be the starter and again, that's just so awesome that every year he got challenged, he got replaced and battled his way back and proved that he was the guy. That, to me, is so impressive in this day of people opting out and not getting their way and quitting — not him. I'm so proud of him and impressed with him in that sense," Look added. "You'd never hear anything negative coming out of him, never complained and just went back to work to prove himself."

Tuulima was a three-year starter on the offensive line for Iolani. He turned down offers from several smaller schools on the mainland in order to walk-on at UH, where he was first relegated to the d-line, but eventually matriculated his way back to the offensive side of the ball. 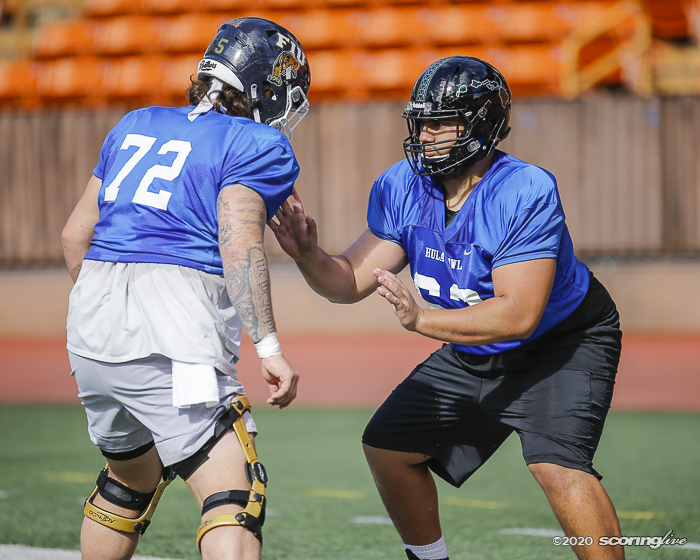 Tuulima made honorable mention All-Interscholastic League of Honolulu as a junior in 2014 and the following year earned second team All-ILH honors. But that didn't tell the whole picture of Tuulima, who also studied Chinese language and played the saxophone since the third grade.

"He's more than just a football player," Look said. "He's the one you'd want to look at if you were talking about a student-athlete, he's the complete package of a student-athlete. For what he had to do to come to Iolani School was a huge sacrifice that his family and himself, as a 15-year old kid, had to make, but he always had great family support. If you were to model a family and a mother and father that are examples of what supportive parents should be, they should be on the brochure because they're awesome."

To be sure, Tuulima is most appreciative of the support of his parents, Wayne and Puanani, but grateful for all of the coaches and mentors who have shaped him into the player and man he is today.

"I just love my family and I love everyone who's helped me along the way; they've had a lot of impact on me. All my coaches teach me something and I try to apply that to not only on the field, but to life as well," said Tuulima, who was also a member of the wrestling and track and field teams at Iolani.

Tuulima takes to heart the meaning of the word, student-athlete. He was an honors students while in high school and in December of last year, Tuulima earned his degree in mechanical engineering.

"Being able to balance school with football was hard, but I had a lot of practice while I was at Iolani. I think Iolani is the hardest school, but I was fortunate enough to have good teachers and then learn from an early age how to manage my time," Tuulima said.

Tuulima credits Iolani School counselor Lara Feldhaus for taking him under her wing and instilling in him the importance of a solid education.

"I still keep in touch with aunty Lara, but I think high school is important because whether you play sports or not, it's that first step toward getting your degree, getting your high school diploma and the next step, whatever you want to do in life," Tuulima said.

Just as he has done in the classroom all his life, Tuulima isn't afraid to put in the work to get noticed this week.

"It's going good. I'm having fun out here with all the boys, meeting new people, competing against a bunch of the best from all around the nation, all different schools, it's fun and I'm just trying to get as many reps as I can," said Tuulima, who saw time at center and both right and left guard in Thursday's practice at Aloha Stadium.

Wherever he lines up on Sunday, Tuulima will surely appreciate the view.

The Hula Bowl will air live on CBS Sports Network. Kickoff is scheduled for 4:30 p.m.

The Kaiser graduate and 2018 All-Hawaii Offensive Player of the Year played in all 12 games this season...