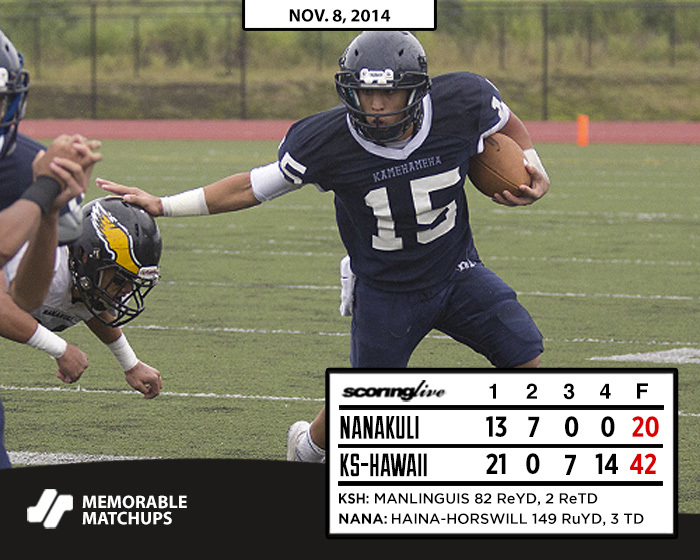 After Nanakuli marched 66 yards in seven plays on its opening possession of the game to take an early 6-0 lead, Kanehailua got Kamehameha-Hawaii rolling offensively. His 5-yard touchdown run tied it at 6 and Grant Shiroma's ensuing extra point gave his team the lead for good.

The Golden Hawks pulled within 14-13 on Makaila Haina-Horswill's second of three rushing touchdowns in the game, but Batacan scored on a 15-yard run on the penultimate play of the first quarter and found the end zone again on a 9-yard run minutes into the second quarter. Kalai converted both PATs to extend Nanakuli's lead to 28-13.

Late in the second quarter, Haina-Horswill broke loose for a 83-yard touchdown run down the right sideline. Clifford Cunningham tacked on the extra point to cut the Warriors' lead to 28-20 and made it a one-possession game.

However, Kanehailua put the game out of reach with a pair of touchdown passes in a span of 67 seconds in the fourth quarter. He hooked up with Shiroma for a 41-yard score and after Caleb Baptiste recovered a Haina-Horswill fumble on the ensuing possession, Kanehailua connected with Manliguis for a 15-yard touchdown to close out the scoring.

Punahou's come-from-behind win over Kamehameha on April 4th of that year was one of just five victories...

The 2017 Kahuku graduate amassed 1,737 digs in her University of Portland career, which ranks second...

The senior centerfielder and clean-up batter drove in five runs in Wednesday's ILH opener, which was...