Football
Driven by its defense, Kauai nearly won it all in 2013 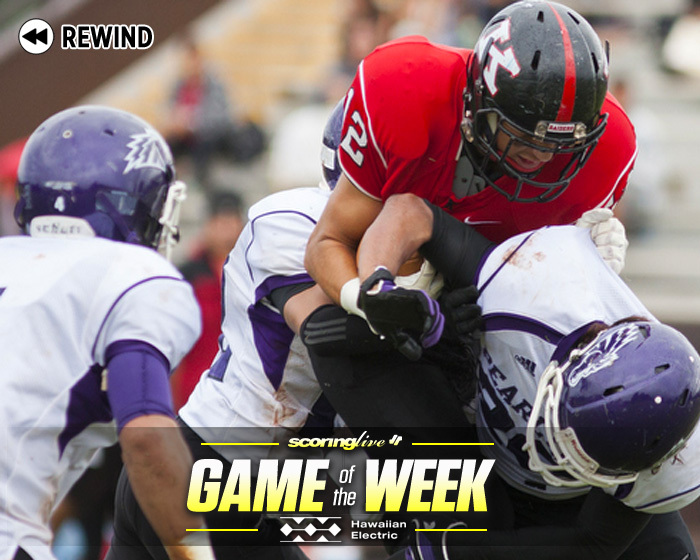 There was no denying the identity of the Kauai Red Raiders during the 2013 prep football season.

"That was one of the greatest years and greatest teams I ever coached," said then-first-year coach Tommy John Cox. "I think we were about 31 (players) strong; it was probably the most fun season I ever had."

But it almost never happened.

When the school was seeking a new varsity football coach in May of that year, Cox — who was the JV coach the past two seasons and an assistant dating back to 2008 — waited until the final day of the application period to put in his resume.

The 1997 Kauai High graduate was ultimately tabbed for the job, but on an interim basis.

"I think the principal we had at that time just wanted to kind of keep things in order and she knew I was there, I was in the (Department of Education), I was a teacher and it just kind of worked out that way," said Cox, then a fifth-grade teacher at Kapaa Elementary.

He added, "I think if they had to go through the whole hiring process and all that over the summer, it might have been tough to get a good start to the season."

Well, safe to say it was a good call.

Cox and the team put together arguably one of the greatest seasons in program history. Kauai reached the Division II state championship game for just the third time ever and finished with a 10-1 record.

"That was unlike anything I ever expected. We shocked everybody. I don't think anybody expected that out of our little team," said Cox, who was 34 years old at the time.

He noted that continuity within the coaching staff eased the transition for him and his players alike.

"We had the coaching changeover in May, but we were lucky enough to keep the whole staff pretty much intact, which was a huge help," Cox explained.

By the time the Red Raiders reached the First Hawaiian Bank/HHSAA State Championships, they were most certainly a well-tested bunch.

Not that it came easy. The Warriors of Kapaa made sure of it.

Although the Red Raiders swept all three meetings against Kapaa, the final score of each game proved just how close the teams were:

"Those were huge," Cox said of the trilogy.

"Three games (decided) by seven points, they were back-and-forth. It really built some character in the boys where they couldn't quit and they just had to battle it out. … Kapaa and us were up-and-up and we were fortunate enough to come out with the three victories, but no matter if it was us or Kapaa, they would have done well in the state tournament," he proclaimed.

Despite an 8-0 record and being just one of two undefeated teams entering the D2 state tournament, the Red Raiders were seeded third in the six-team tournament and drew a first-round match-up against OIA runner-up Pearl City. 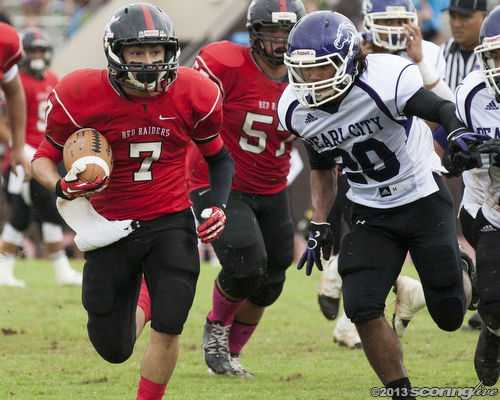 "We were hoping for a first-round bye that we didn't get, so I think the mindset that our guys had was a little different going into that Pearl City game. I think they had something to prove that game and they played a little harder," Cox said.

After a scoreless first quarter, Kauai put all of its points on the scoreboard in the second stanza.

The Red Raiders drove 81 yards in 11 plays on the scoring drive, which was capped off by a 1-yard TD run by Kanoa Iwasaki eight seconds into the second quarter. The drive, which took more than four minutes off the clock, was extended by a pivotal third-down pass completion from quarterback Kelson Andrade to receiver Kalawaia Judd. The touchdown was set-up by a 28-yard inside run by Reggie McFadden.

"We ran the ball well, I know that, that was our M.O. for the year: basically trying to move the chains," Cox said. "We didn't feel comfortable throwing the ball, so that drive was almost like our whole season: pound it out, play field position and I think that's what we did."

The extra point, by Pono Bukoski, gave Kauai a 7-0 lead.

Later in the quarter, the Red Raiders built upon that cushion with another long drive. This one took 5:13 in duration and was highlighted by a 13-yard TD pass from Andrade to Bukoski. The scoring play was the third third-down conversion of the drive.

"We just want to be put in manageable third downs, that was our goal. We didn't want to get stuck in any third-and-longs, that wasn't our forte," said Cox, who added that Andrade's decision-making was a key factor in the equation.

"Kelson was a game manager, he was calm, he always kept it calm and he really minimized mistakes. Even when he was throwing the ball, he wasn't gonna throw interceptions, he was gonna be a good game manager and control the tempo, which is always good," Cox said of his senior quarterback.

"I think Reggie was our more shifty back and Kyron was our more downhill guy, so that was a good complement and that's how we utilized them; Kyron was a lot more inside the tackles," Cox said.

The duo combined to run for 117 yards on 23 carries against Pearl City.

After trailing 13-0 at halftime and a mere 58 yards of total offense through the first two quarters, the Chargers turned to their own run-heavy package out of the I-formation.

On their first possession after the intermission, they ran the ball on nine of 10 plays. Their only pass attempt was intercepted by defensive back Kaiea Iwasaki in the end zone for a turnover.

"That's pretty much what it was all year: bend but don't break," Cox said of his defense. "All year they stiffened up in the red zone. Those kids on defense, they were just amazing."

It was one of four interceptions recorded by the Kauai defense that day, three of them coming off of starting quarterback Jordan Taamu, now a member of the NFL's Kansas City Chiefs practice squad.

"We got to watch Pearl City in that OIA championship game against Kaiser — that's all the film we had — but we knew Taamu could throw the ball," Cox said.

The Red Raiders limited Taamu to 109 yards through the air on 10-of-25 passing and no touchdowns. The Chargers were just two of 14 on third downs.

"They just played fast — all eleven guys to the football — that was it with the defense," Cox said.

Middle linebacker James Bukoski recorded half of Kauai's picks that day, as well as a game-high 10 tackles.

Pearl City finally got on the board with 7:26 left to play on a short touchdown pass, but unlike the year prior — when they blew a fourth-quarter lead in a 22-21 opening-round loss to Radford — the Red Raiders were able to close this one out.

Even though he was still the JV coach at the time, Cox said he was sure that the season-ending loss to the Rams in 2012 fueled his players to finish against the Chargers a year later.

"I think it pushed them a lot because a lot of our team that year — we were senior-heavy — a lot of them played in that game against Radford. Nobody likes to get bounced in the first round, especially after being undefeated going into that game, so these guys were hungry and their goal all year was to get to (Aloha) Stadium," Cox said.

But the 13-7 victory over Pearl City still left Cox's squad one win short of reaching Halawa.

All that stood in their way?

The Raiders, who were seeded second, had the benefit of playing at home in Kozuki Stadium, but had little answer for Kauai's ground game, which racked up 333 rushing yards and averaged 5.6 yards per carry. 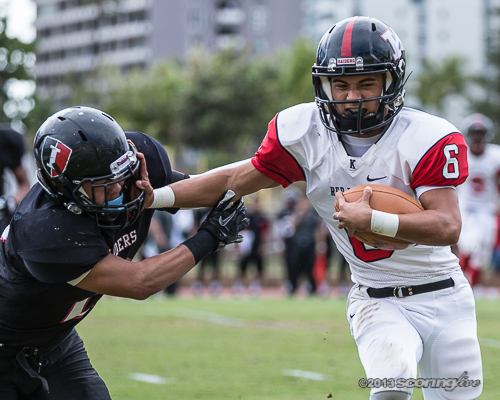 The visitors from the Garden Isle went on to a 28-7 win in a monumental upset.

"That Pearl City win was big, but I think what helped put these guys on the map was how they played at Iolani. I don't think anybody gave us a chance going in, but the offense played well, the defense was prepped well and we gave them some looks that we didn't have all season," Cox said. "I would think it's one of the biggest wins in Kauai school history."

That propelled the Red Raiders into the state final a week later. However, they finally met their match in OIA champion Kaiser, which defeated top seed Lahainaluna, 20-9, in the other semifinal.

The Cougars rallied from an early deficit in the championship game and held Kauai to just 77 yards of total offense en route to a 17-7 win.

Cox said it was a bittersweet end to a special season.

"I think when you get to some place that you're not supposed to be it hurts a little more to lose, but I think everybody was proud of those boys and what they did. We knew what we were up against going into that Kaiser game, they were an unreal team, but we gave them all we had and it was a good game. I'm extremely proud of them and how they played that game," Cox said.

After the completion of the season, the individual accolades rolled in for the Red Raiders. James Bukoski was selected as All-Hawaii D2 Defensive Player of the Year. He was joined on the First Team defense by safety Kaiea Iwasaki. Defensive lineman Keanu Hanohano earned a nod on the Second Team.

"He was our starting left guard," Cox said of Herbig, who was listed as a 6-foot-3, 290-pound sophomore on the team roster.

He added, "We'd use him on defense once in a while, on goal line or short-yardage downs, but I think with Nate his goal was always to get to the NFL. He was big, he had good feet and I think going to Saint Louis upped his game even more and he could show what he could do. He was a huge force for us as a sophomore and more than held his own on the line and I think anytime you have someone go from Hawaii to the NFL is huge for anybody, but you could see in him from his sophomore year the potential that he had."

Cox was selected as All-Hawaii D2 Coach of the Year and returned to coach one more season at Kauai before stepping down with a record of 13-6, including 9-3 in KIF play.

"I was going to hang it up after that season but I came back one more year and Kapaa spanked us pretty good that year," said Cox, who left coaching — and teaching — to pursue a career in school administration.

He is now in his second year as a high school principal.

"And now I'm at Kapaa of all places," Cox laughed.

He admits that he sometimes misses coaching.

"I do, I do. I think after doing something like that for so long, it's always hard and I do miss it, but the kids around here they keep you alive," Cox said. "I still get to interact with students and I take great interest in athletics here, so it's good."