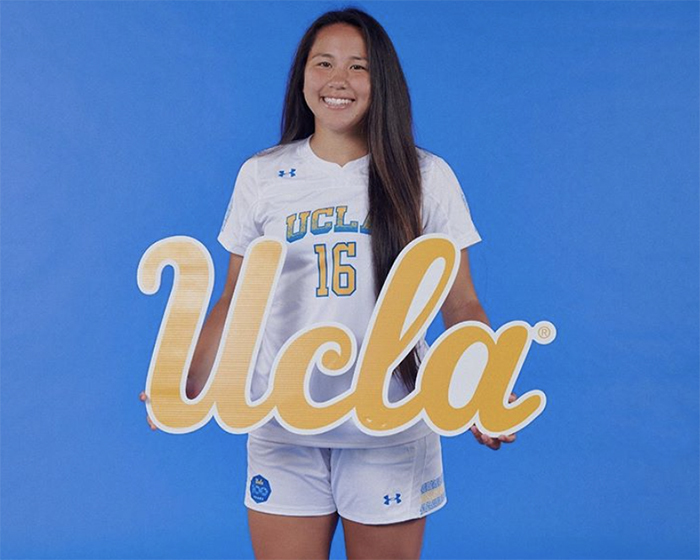 The road to recovery has been a lengthy one for UCLA's Sunshine Fontes.

Twenty-one months have passed since Fontes, a 2019 Pearl City graduate, tore the ACL in her right knee in the semifinals of the Oahu Interscholastic Association tournament.

"Against Moanalua," Fontes recalled. "January 17th. I remember the date." 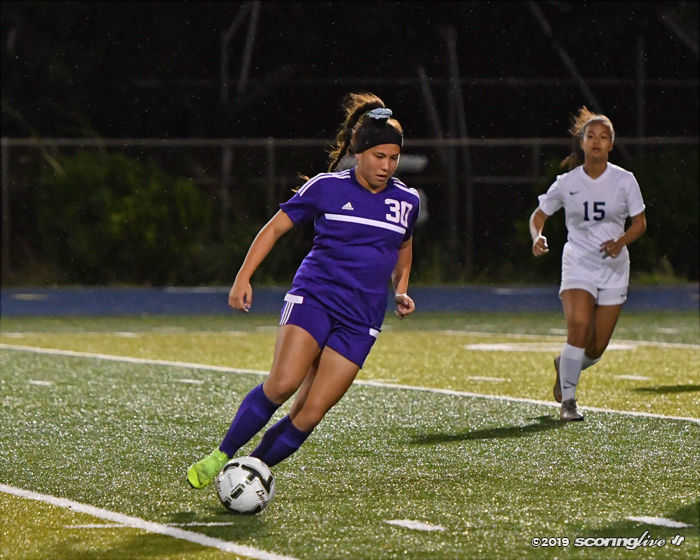 That was the last time that Fontes — who was later selected as All-Hawaii Offensive Player of the Year — played in a soccer game.

"I think I've just never been through a major injury before and going through this, I didn't really know what to expect or how long the recovery process was gonna be and I've talked to so many people about it, but everyone's recovery process is different, so I couldn't really rely on everything they said and I couldn't just think that that was gonna happen to me," said Fontes, who was twice selected as Gatorade State Player of the Year.

Fontes totaled 81 goals in her prolific prep career. She was a four-time All-Hawaii selection, including a three-time First Team pick. As a freshman in 2016, Fontes helped the Chargers claim their first state championship in 19 years with a hat trick in the title game against Baldwin. 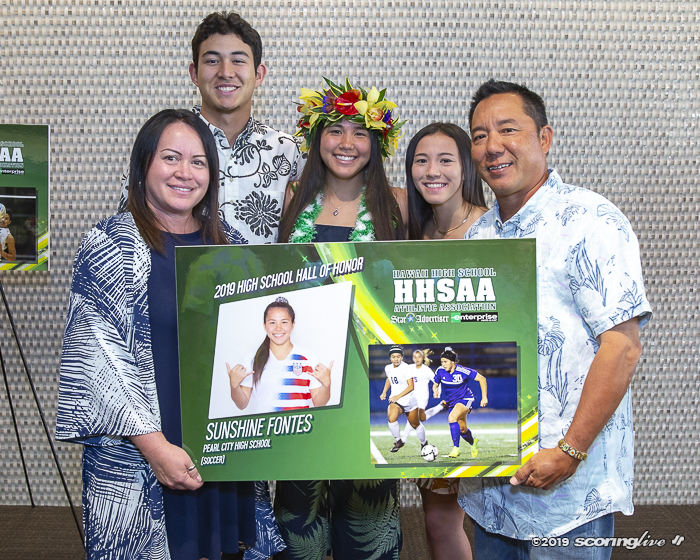 Despite missing out on the state tournament as a senior, Fontes was inducted into the Hawaii High School Athletic Association's Hall of Honor in June of 2019.

But it wasn't just on the prep level that Fontes shined bright. Far from it.

In fact, she is the U.S. U-17 national team's all-time leader in goals scored with 24 and had a couple of four-goal games against Argentina and Venezuela in 2018. Fontes is the first player from the 50th state to represent any USA national team at a youth World Cup.

"I think the hardest part for me was just taking a break from soccer," Fontes said.

Before Fontes left her family's Wahiawa home for UCLA two summers ago, she got a rare chance to enjoy some down time.

With her goal today vs. 🇨🇴, U-17 #USWNT forward 🌞 Sunshine Fontes out of Wahiawa, Hawaii
has tied the U.S. record for most career international goals at the U-17 level with 21. #SunnyGoals pic.twitter.com/qSHX0chrC5

"Well, I was traveling every month for U.S. U-17 camps and after I got hurt I would have been going to U-20 camps, but I got to spend time with family at home for last few months before I left for college and I've never really experienced that much family time because I was always at the soccer field or traveling, so it was kind of great to take a step back and realize that there are so many other things that are great and it wasn't always soccer," Fontes said.

Once Fontes arrived at the Westwood campus, she was forced to take a different perspective to the beautiful game than she had ever had before.

"Watching film after games and then sitting through meetings, I would just kind of take in all the information, but I knew I couldn't do anything on the field to help my team and I think that's what affected me the most, was thinking that I should be out there on the field and I couldn't — like I just didn't have that opportunity — so I think that's what really changed how I viewed soccer," she explained.

Fontes was able to return home in September of that year — just a few months after she had left for school — when UCLA played a pair of matches at Waipio Peninsula Soccer Complex as part of the Rainbow Wahine Shootout. Although she was unable to play in either game — a 2-2 draw with Pepperdine and a 4-0 win over host Hawaii — and ultimately went on to redshirt that season, Fontes was included in the traveling party for the team trip.

"They flew me out just because it was home," Fontes said. "It was nice to see family. I mean, it would have been more great if I could have been out on the field and playing at Waipio again, but I mean, just being able to go home for that was just super fun and I don't know, it was nice to see my family and friends come out for the game even though I wasn't playing, but it was a fun trip, that's for sure."

The Bruins went on to finish 18-5-1 in 2019 and reached the College Cup, but lost to Stanford in the national semifinals.

"It was actually really cool to see because I've always just been watching them on my computer, like as a senior and all throughout high school, and it was kind of cool being able to go to the College Cup," Fontes said. "Even though I wasn't playing, I would sit in the stands and cheer my team on, but I wish I had been out there with them, but, I mean, it's all going to work out in the end and I know I'll get back out on the field with them."

However, the COVID-19 pandemic brought Fontes back home on March 14, where she continued her rehab until Aug. 19, when she departed for Los Angeles.

"It was kind of like just preparing for whenever we would go back," Fontes said of her six-month homestay. "I knew that the date was going to happen soon and that no matter what I had to keep training at home, regardless of if it was lifting, or just training with my sister (Randi), like passing and technical work."

Fontes said that she relied on many of her UCLA teammates to help her through tough days and the monotony of rehab.

"There are a lot of us on our team that have knee problems, so I was able to really lean on them and they could lean on me for any motivation they needed, because there were days that I didn't want to get out of bed and I didn't want to do rehab, but I knew that I would get out there on the field soon and I just needed to do whatever it took," Fontes said.

"I think going through that process, nobody knows how hard it is and nobody knows how much it takes out of you because you don't get to be on the field with them, but you have to do rehab every morning before training and then watch them train and it just wasn't fun, but it was worth it, for sure," she added.

When the NCAA announced in late September that most fall sports, including women's soccer, would be pushed back to an early February start date, it bought Fontes some extra time to get ready for the season.

"Yeah, I like to think of it as more time to prepare and get ready because I know this team is going to fight and do whatever it takes to win that championship and if I do what I need to do and control what I can control, I know that I can make a difference on this team and at the end of the day, all we want is to win that championship and we will do anything it takes," she said.

Fontes, who has yet to be cleared for full contact, is taking nothing for granted.

"Hopefully we play in spring. I don't know if we do yet, but I'm 20 months out of surgery and I'm still not cleared, but I've been taking tests every month and I should be cleared by the end of the month. It feels too long," she said.

Fontes has played in hundreds of games over her soccer career, but she isn't quite sure what to expect when she returns to the pitch for her first game action since the ACL tear.

"I'm hoping to be confident and I don't want to hesitate, because that's when bad things happen, but I think I'll be more than ready, especially since it's been 20 months since surgery," she said. "I feel ready and my knee feels strong, so that's really all that matters."

When Fontes makes her collegiate debut for UCLA, she knows it will be because of the continued support of many individuals who have helped her along the way. Among those she counts as a mentor is her high school coach at Pearl City, Frank Baumholtz, who was often one of Fontes' toughest critics. 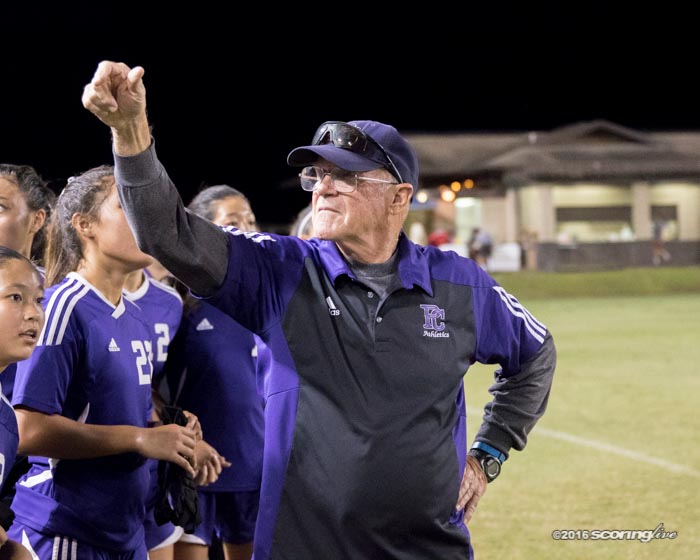 "Well, I mean, he's been through it all. He's seen so many players come through his program and I think he never wanted me to be complacent and he knew that there was always time to get better," Fontes recalled. "No matter what day it was there was always something he would tell me that I could get better on and I think that now that I look back on it, I'm grateful for it. I definitely think I could have been complacent a lot more, but because of him I wasn't to be and he pushed me to be better every day and I respect him for that."

Fontes remembered that early on in her prep career, she sometimes found herself at odds with Baumholtz.

In hindsight, she understands.

"There were some days. I would travel with the US team and then I would come back and he would sit me out of the first half of some games as a freshman and I was like, ‘Why was he doing that?,' but at the same time, I kinda got it," Fontes admitted. "I wasn't training every day with them and so I just respect him for everything he's done for me and even though there were hard days, I wouldn't change anything."

The first day of the NCAA women's soccer season is scheduled for Feb. 3 and concludes with the College Cup, May 13-17.

Also on the Bruins' roster is freshman midfielder Aislynn Crowder, a 2020 Mililani graduate and club teammate of Fontes with the Hawaii Rush.