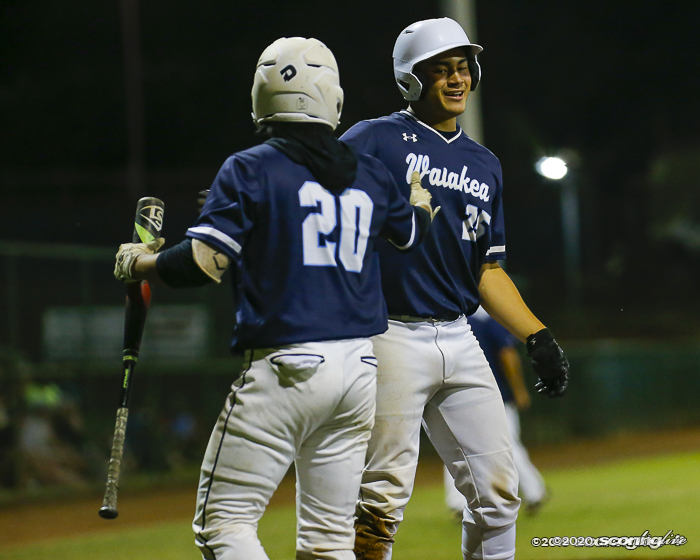 Waiakea's Kalai Rosario (25) celebrates with Cody Min (20) after a run scored in a HHSAA state tournament game against Baldwin on May 9, 2019. Rosario, a recent graduate, was selected by the Minnesota Twins in the fifth round as the 158th pick overall. CJ Caraang | SL

No, Kilauea did not act up again on the Big Island. That commotion came from the Rosario household.

"My whole house pretty much erupted," said Kalai Rosario on his being the 158th pick of the Major League Baseball First-Year Player Draft by the Minnesota Twins Thursday afternoon. The draft ended after 160 picks when the fifth round ended.

Rosario, a two-time All-Hawaii outfield selection, was the only Hawaii high school player taken in this year's contracted five-round draft; recent drafts had been 40 rounds, but it was reduced because of the coronavirus pandemic.

"Me and my family were just waiting," said Rosario, who said he was watching the draft with his family on the MLB Network.

University of Hawaii pitcher Jeremy Wu-Yelland was the only other player with ties to Hawaii picked. He went in the fourth round (118th overall) to the Boston Red Sox.

Rosario said he will discuss his future with his family, but said he is likely to sign, forgoing a collegiate career at Cal Baptist.

The only other question is out of Rosario's hands, as well as the other 159 draft picks. No one knows what will happen once the players sign. There has been no indication if the minor leagues will have a season.

Rosario said he stayed in touch with his advisor, David Matranga of PSI Sports Management. He also is an agent for St. Louis Cardinals Gold Glove second baseman Kolten Wong, also from the Big Island.

"The first part of my dream is coming true, so the work starts now," Rosario said.