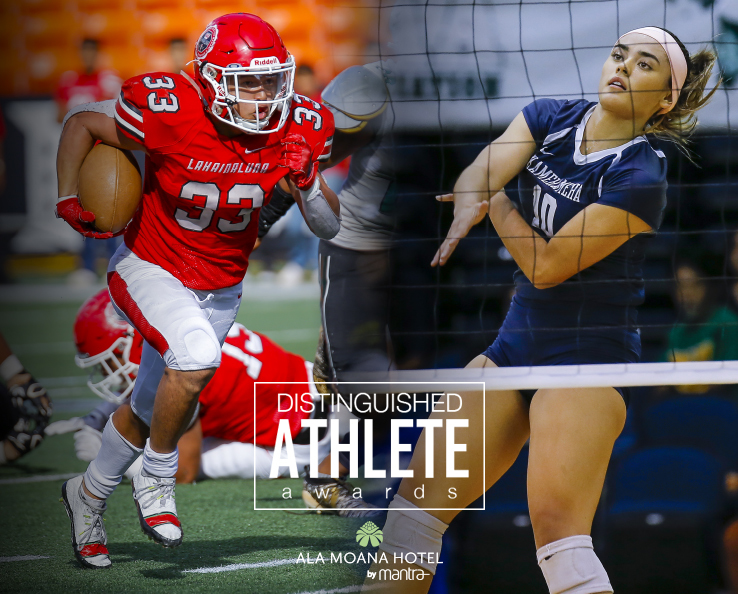 For both Joshua Tihada and Keonilei Akana, the victories in the sports arena — and there have been many —  are the end result of years of hard work and perseverance.

And it certainly didn't come without adversity.

The pair of recent graduates — who combined to win six state championships and three All-Hawaii Player of the Year awards between them — capped off their high school athletic careers with one final award.

The award winners took some time out of their schedules recently to talk about their respective paths to success, as well as some of the obstacles that they faced and some outgoing advice for those student-athletes just starting out their prep careers.

SL: Recall a time that you faced adversity and how did you overcome it?

Tihada: "A time we had adversity was probably during the seven-overtime game (2017 D2 state championship vs. Konawaena). Going into the second OT, we had a long fourth down and it was just a really tough time for our whole team, but it was fourth-and-20 and to overcome that, I just thought back to all those times in practice, all the time commitment we put into lifting in the mornings and all those practices and it just gave me a boost of confidence when I caught that ball. Since my freshman year I definitely had a drive and I faced adversity that prepared me for later times throughout the years, so I'm very thankful for that moment, for all the coaches that prepared me since Big Boys, since sixth grade that paved the way for me and so I'm very thankful for them. They helped me overcome so much in life. They've had a really big impact on me, so I'm very thankful for them."

Akana: "Recently it came out that I had two brain tumors that were part of my high school life. That was some adversity that I had to face and it also affected my sports career in high school and so something that helped me get out of that was just the support I had from my teammates, my family, my coaches. They motivated me and they knew how much sports meant to me, especially the sport of volleyball, so always just working hard and always following my dream helped me to get out of that and maybe me speaking about what I went through will help someone in the future who is going through the same thing or maybe just thinking about quitting."

SL: What was the most valuable lesson you learned through high school sports?

Tihada: "Probably the most valuable lesson I learned through high school sports is patience and hard work. I feel like patience comes a long way with being respectful and being there at the right time and being able to compete with everyone, not necessarily waiting your turn, but looking at things from a different perspective or angle and just trying to get better. I really learned how to work hard and be patient and just persevere, look at things from a distance and figure out ‘how can I get better?' For me, playing as a freshman until now as a senior, it definitely made me aware of my surroundings and I just took in as much as I could."

Akana: "Definitely I learned a lot about teamwork and unity through high school sports. Every year you get another team, you get new players, you get new teammates and just learning every season how to work with other players and how to work as a team. From the beginning of the season, you have to find a way to learn to work together and you have all these bonds and friendships you make, so that was something that was important to me also about being on an athletic team."

SL: What does winning the Distinguished Athlete Award mean to you?

Tihada: "It's definitely a huge blessing. It's amazing just to think that I would ever be in this position in my life. I'm just thankful for everyone who has got me here, my coaches, teammates, friends — they're just a huge blessing. They're always putting in work with me, trying to get me better, so this award means so much to me and I'm just happy for our whole community; I'm proud to represent them. This is a huge moment and I'm just so thankful for everything."

Akana: "It means a lot. I mean, when I found out I was super happy and super stoked. I know a lot of the support I had from my family, friends, coaches and especially teammates had a huge role and they were always there for me. Us working as a team throughout the season really helped me get to where I am today."

SL: Lastly, what's the best piece of advice you can offer a student-athlete entering his or her freshman year of high school this fall?

Tihada: "Definitely just be patient and just observe older athletes, learn something new each and every day. Even if you're working out on your own, or in school, just try to get yourself better and keep with that goal at-hand, be patient and learn, just be a sponge. I was the water boy since third or fourth grade and football inspired me to be a community member, to be a good athlete, to be a good person, but just work hard, most definitely."

Akana: "I would say to never give up, to always work hard, to always give your 110 percent on the court, or on the field, or anywhere you are. As long as you set your mind to it and you have a positive mindset about it, then you'll be able to achieve anything you want.

Over the course of his decorated prep career, Tihada became the all-time leading rusher in Maui Interscholastic League football history. In nine career state tournament games, he rushed for 1,087 yards, including a state tournament-record 310 yards in last November's win over Kapaa in the D2 state final. His 19 career TDs in the state tournament stand alone in the record books.

Lahainaluna won the Division II state championship in each of Tihada's four seasons.

Tihada, a two-time All-Hawaii D2 Offensive Player of the Year, will attend the University of Nevada-Las Vegas in the fall, where he will join the football team as a preferred walk-on.

Akana helped the Warriors reach the Division I girls volleyball state title match in each of her four seasons. She garnered All-Hawaii recognition three times, including first team honors in each of the last two years. Akana, who will play collegiately for the University of Nebraska, is the reigning All-Hawaii Player of the Year.

Akana is the second straight winner of the Female Distinguished Athlete Award to hail from Kamehameha, following in the footsteps of her former volleyball teammate and 2018-'19 All-Hawaii Division I Girls Basketball Player of the Year Kalina Obrey.

Eagles grit out wins in set one and two before pulling away in the third to complete the sweep.

The league announced on Monday morning that the D1 games originally scheduled for Oct. 15-16 have been...

No. 1 Saint Louis handles No. 4 Punahou in regular season opener

AJ Bianco led the way with three passing TDs and the Crusaders got two more on the ground in the season...

The five teams in Division I will play a four-game regular season, while the six Division II teams will...

The Raiders scored in all three phases of the game in the first half to improve to 4-0 overall.