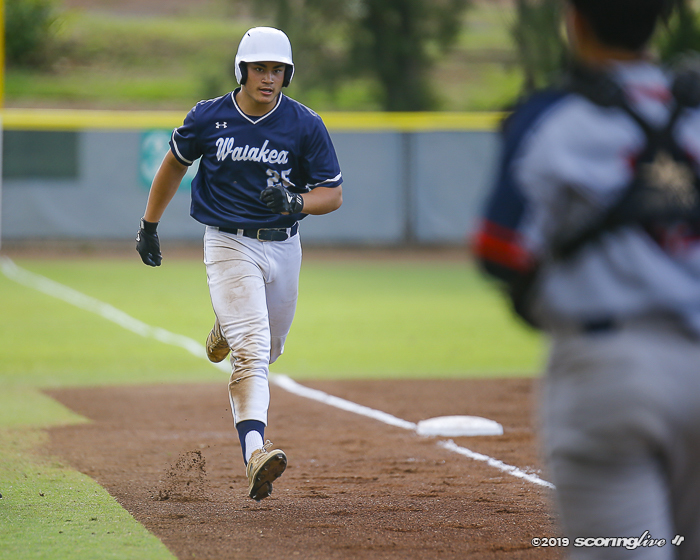 The coronavirus might have robbed recent Waiakea High graduate Kalai Rosario of his senior season, but it is what he did last summer that propelled him to the 808's top prospect for this year's Major League Baseball First-Year Player draft.

Rosario, a two-time All-Hawaii first-team selection, could be the only player with ties to Hawaii who will get picked. The draft runs June 10 and 11. But unlike previous years, the present situation has reduced the draft from 40 to five rounds. That means only 160 players, including supplemental picks, will be selected compared to 1,217 chosen last year. The first round will be June 10 with the remaining rounds the next day.

According to Baseball America, Rosario is ranked 88in the publication's top 500, which is in the third round. The signing bonus for that slot is $667,500, according to BA.

"It's super exciting, but more of a relief because of all the hard work I put in," Rosario said of the projection in a phone interview. "When the day comes and I get the call, it's going to be amazing for me. But it will be just the beginning. Getting to the pros is not going to be easy but that's my goal. It's been my goal since I was a kid."

The right-handed hitting Rosario caught MLB teams' attention last summer at showcases and when he won a home run derby at the Area Code Games. One his homers was measured at 440 feet using a wood bat.

"It was huge for me," said Rosario, a 6-foot-1, 200-pound outfielder. "Basically, I had scouts looking at me a couple years back. I'd be playing against Micah (Bello), so that was good, they got to see me. But it was at the Area Codes when I really grew up and I kind of got out there and showed that I could hang with the best guys in the nation. That was a super-stoke experience, really, for me. I feel like I play my best when I'm with the best. That's where I want to be so it was pretty cool to get (my name out there."

Bello, a Hilo High grad, was a second-round pick in 2018 by the Milwaukee Brewers. He is a top-30 prospect in their organization, according to BA.

Including Rosario, five players with ties to Hawaii were in BA's top 500 draft prospects. One is Rosario's classmate, first baseman Safea Mauai (450) and the other is Hilo High infielder Maui Ahuna III (435). The other two who made the top 500 are UH pitchers Jeremy Wu-Yelland (260) and Carter Loewen (466). Even if players go undrafted, they can sign as undrafted free agents later. (In ESPN's top 150, Rosario is ranked 114th and Wu-Yelland is 138th. Both are in the fourth round.)

Because of the pandemic, public fields have been limited to certain activities and baseball is not one of them. Rosario's workouts have been limited to the batting cage and weight training, he said. He has been working on his hitting with Kaha Wong, father of big leaguers Kolten (Cardinals) and Kean (Giants). The elder Wong has helped Big Island youth realize their pro and college dreams.

"I haven't seen live pitching because we really can't get on the field," Rosario. "We tried to go on the field, but we got kicked off a couple times. We're really just trying to do what we can."

Since scouts cannot do game evaluations with prospects, Rosario said he has been on a number of Zoom calls with them. "They do a couple meetings with me, talk story to get to know me more, just what I'm doing, how I'm keeping up to get ready for the draft," he said.

Like all spring athletes who lost their seasons, Rosario was disappointed. The Warriors finished second in the state in 2018 but were eliminated in the quarterfinals last year. He was hoping this would be the Warriors' year.

"It was definitely hard for me," Rosario said of his lost senior season. "It took me a while to process that (the season) was really over. We had goals, too. We wanted to win it all….Not being able to be on the field with my teammates again hurt the most."

Whether Rosario's team could have won a state title is not the only question now. Even if he is drafted, the future is still in limbo. The minor league seasons might be canceled, so he would have nowhere to go.

"They said most likely you guys have to wait it out," Rosario sad. "There's nothing really final. It's hard to say right now, so I'm just waiting to see what happens."