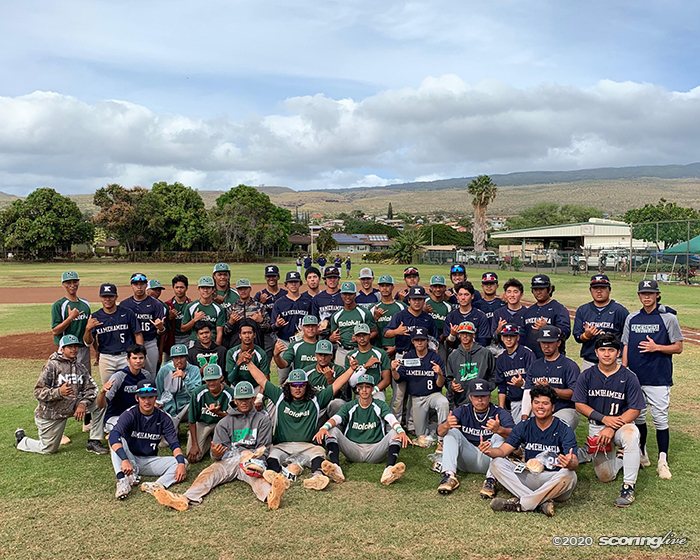 Kamehameha and Molokai players pose for a group picture. While most of the team was getting its first taste of Molokai during the trip, it was a homecoming for four players. Seniors Vince Venenciano, Cye Young and Joey Mahiai-Paleka, along with junior Trayce Young all grew up on the island. Courtesy Daryl Kitagawa 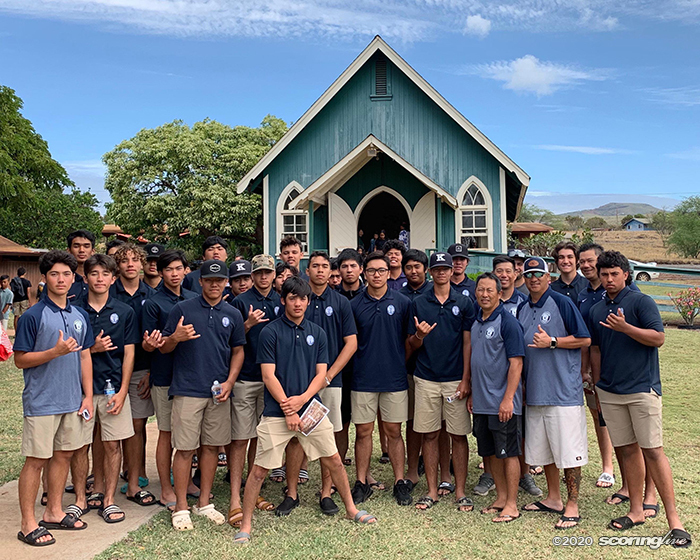 Kamehameha players pose for a team picture in front of Kalaiakamanuhou Church on a recent trip to Molokai. Courtesy Daryl Kitagawa 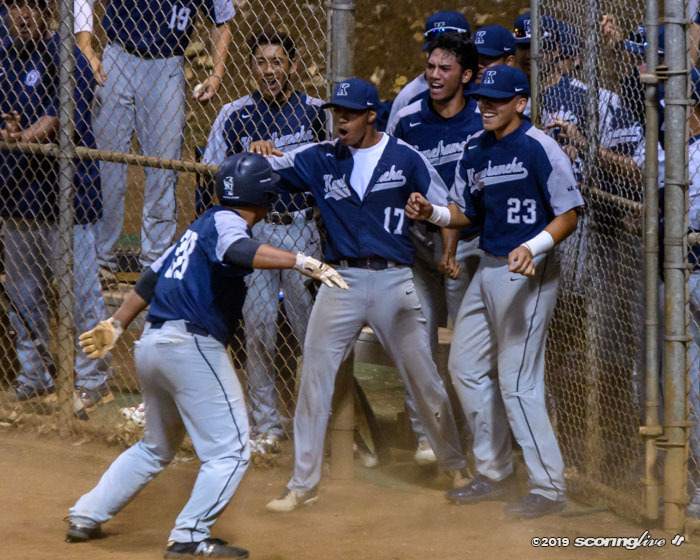 Keala Alcon (#17 pictured above) celebrates with his teammates after a run scored against Saint Louis on April 23, 2019. Spencer Honda | SL

If there are no more prep sports to be played this spring, the Kamehameha baseball team will always have Molokai.

The Warriors spent three days and two nights on The Friendly Isle earlier this month — before the coronavirus pandemic largely shut down the sports world — and came away with an experience they won't soon forget.

The team departed Honolulu for Hoolehua on the morning of Friday, March 6 and returned to Oahu that Sunday evening. In between, they took part in a three-team preseason tournament hosted by Molokai. The Warriors won all three of their games — including a wild 16-15 victory over the Farmers Friday night — but baseball itself was just a small part of the weekend.

"We did plenty of stuff, it wasn't only about baseball," Kitagawa said. "Molokai is a special place with all of the historical sites. Our chaplain, Kahu Barrett Awai — my former teammate at Kamehameha — he goes to Molokai a lot and there's some old Hawaiian churches there, so we attended a church service on Sunday, we participated in a Relay for Life event one night, we went on a Kalaupapa trail hike and it was awesome. It's hard to explain, but it's one of the best trips I ever took."

While most of the team was getting its first taste of Molokai during the trip, it was a homecoming for four players. Seniors Vince Venenciano, Cye Young and Joey Mahiai-Paleka, along with junior Trayce Young all grew up on the island.

"As soon as we landed they all reached out and just expressed their sincere appreciation, saying ‘thanks for allowing us to go back home and play in front of our families.' That's just how these kids are, too," Kitagawa said.

It wasn't just a big deal to the players either.

"Someone told me, ‘You guys coming here is like the (New York) Yankees coming to town.' I was like, ‘what?!,' " Kitagawa laughed. "But they were super happy. I think from what the people have told me on Molokai, this was the first time that Kamehameha baseball has ever gone to Molokai."

Kamehameha players pose for a team picture in front of Kalaiakamanuhou Church on a recent trip to Molokai. Courtesy Daryl Kitagawa    View image

So how did the trip come about?

"We were talking as coaches about ‘what can we do next year' and some random thoughts came out and we said, ‘How about we go to Molokai and bring the kids back home?' So we brought it up to our AD in the fall and then so plenty hands were involved. We reached out to (Molokai) coach (Keahi) Rawlins, who wanted to do a preseason tournament anyway, so it kind of worked out where we could take them back home and they could do a preseason tournament as well, so it was a win-win for everybody," Kitagawa explained.

The plans gained traction with the addition of PAC-5 to the tournament. Wolfpack coach Paul Ah Yat is a state employee with the Department of Hawaiian Home Lands.

"His designated island that he serves is Molokai," Kitagawa noted. "We talked and he said, ‘we going go, too.' It was awesome."

Upon arriving on Molokai, Kitagawa said that there was not much left for the team to figure out on its own. Instead the families of his players that call the island home provided all the hospitality needed — and then some.

"The amount of things they did for us up there was priceless — accommodations for food, everything — and with me not knowing anything about Molokai they arranged for lodging, they had a luau for PAC-5 and us that Friday night. I mean, it couldn't have been any better, to be honest," Kitagawa said.

Leading up to the weekend — and most certainly over the course of the three days — Kitagawa couldn't help but think about one former player who made a lasting impression on him.

Keala Alcon (#17 pictured above) celebrates with his teammates after a run scored against Saint Louis on April 23, 2019. Spencer Honda | SL    Purchase image

"Keala Alcon. He graduated last year, but he's from Molokai and well, we try to base our baseball program off of core values … so I kind of used the word ‘I Mua' and created an acronym of how I want our program to portray and display what we want to do, so the ‘I' is for integrity, ‘M' for malama, ‘U' for unity and ‘A' for aloha. Keala Alcon, he really, really epitomized everything we want to do as a program," Kitagawa said.

As a senior last season, Alcon twice worked his way into the starting lineup, only to be eventually relegated to the bench both times.

"But through that whole thing his character and how he did everything was just unbelievable and it made me realize how special working with kids are, so this trip was not just for our four guys on this team, but for him, too," Kitagawa said. "He's just a special person and I have a real soft spot for him."

Alcon, whose full first name is Kealamauloa, is a rising musician. His song, "We Chanting," has taken off in popularity.

"His music is blowing up on the local radio," Kitagawa said.

While Alcon is gaining notoriety for his music, the 2019 graduate isn't around to witness it first-hand. Instead, he's currently in the island nation of Vanuatu in the south Pacific, where he is serving a two-year church mission.

On the Sunday that the Warriors were set to return to Oahu, Kitagawa said that Alcon reached out to him via email in a rather serendipitous moment.

"There was plenty stuff that happened and I don't leave it to coincidence. I'm not much of a religious person, but I believe in it and he sent me the email as we held a clinic for the Molokai youth that day," Kitagawa recalled. "Right when I called all the Molokai kids in, he sent the email — I looked at the time stamp — and just then his song was playing on the radio, too."

For the four Kamehameha players from Molokai, the trip brought them full circle to where they all picked up the sport.

"I said to Vince, ‘I'm glad we got to do this and you guys got to play on this field (Duke Maliu Regional Park in Kaunakakai) one last time,' and he said that they came to Kamehameha as seventh graders so they never played on that field ever, so you could see the sincere gratitude of those kids, just being able to play against their childhood friends and rivals and the whole town seemed like was at the field. They were celebrated in their own community, which was very special just to be a part of and observe," Kitagawa said.

To be sure, the experience was appreciated not just by the four Molokai boys, but by the team as a whole and will certainly serve as the lasting memory of the 2020 season years from now.

"That's not even a question. In fact, some of the kids were making arrangement to go back right after school is done because they loved it so much, my son, Casey, included," Kitagawa said.

After the Warriors (1-1) returned from Molokai, they played just two games of their Interscholastic League of Honolulu season before the season was put on pause due to the ever-changing COVID-19 situation.

"The whole trip was for multiple reasons: take the boys home and give our kids a chance to bond and have some fun right before the season," Kitagawa said. "And who knows, right? We might not play again this year, so just to do that was special in itself."