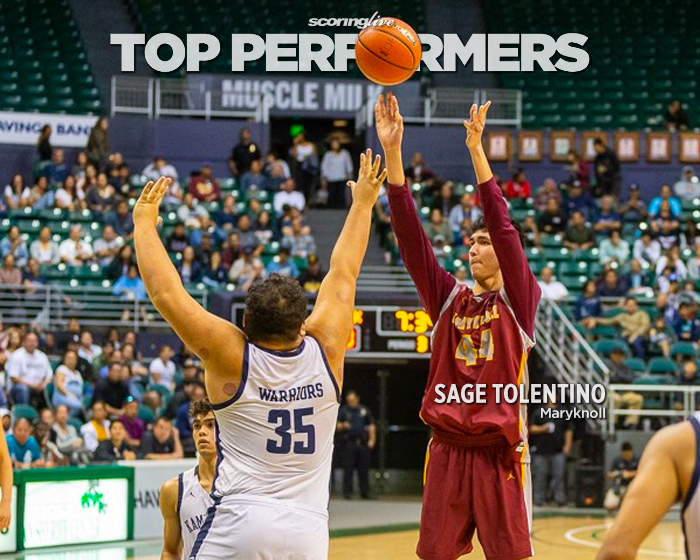 Sage Tolentino did some major growing up last week. Just not the kind that can be measured by most metrics.

The 16-year-old Maryknoll sophomore was already a large presence on the court at 7-feet tall, but Tolentino firmly established himself among the state's elite players with his performance in last week's Snapple/HHSAA Division I Boys Basketball State Championships.

Tolentino averaged 13.5 points, 8.3 rebounds and 3.5 blocks per game to lead the Spartans to four wins in five days and back-to-back state titles.

"He was primarily the reason we got as far as we did," Maryknoll coach Kelly Grant said of Tolentino, who was selected as the tournament's Most Outstanding Player.

It starts with what he brings to the defensive end of the floor.

"We base everything off of defense and we funnel everything to him because of his shot-blocking ability. Even if he doesn't block shots, he alters shots and opposing teams a lot of times don't attack the basket because of Sage and they know that right after that first (defender), Sage is right behind," Grant explained.

Tolentino started off the week with 12 points, four blocks, three rebounds and a steal in Monday's 49-41 overtime win over Kalaheo. He followed that up with 11 points, seven boards, five blocks and two steals in a 61-32 quarterfinal win over Kamehameha-Hawaii Wednesday.

After logging a team-high 28 minutes of action against KS-Hawaii, Tolentino upped the ante the next two nights. He played all 32 minutes in both Thursday's 57-40 semifinal win over Damien and Friday's 46-33 victory over Kamehameha in the championship game.

"I'm happy that he battled and showed his toughness. He sprained his ankle again in that championship game and was kind of hobbling in the second quarter, but he played through it. There were times (this season) he was good on offense, there were times he was good on defense, but he never put it together on both sides, but I felt that he did that in this tournament," Grant said.

"He wasn't our first option (on offense) because we had Liko (Soares) and Niko (Robben), but for a person who was a third option, he sure scored a lot of points and he did a great job rebounding," Grant said. "We talked constantly about positioning on offensive boards and how to attacks the boards."

While positioning is one thing, basketball coaches often talk about offensive rebounds being about sheer determination and desire — something that Tolentino, in spite of his easy-going persona, certainly doesn't lack,

"You talk about competitiveness, I mean, there's something about the boy that he just doesn't want to lose. Even if we're in P.E. class and playing a game, he doesn't want to lose. He's not doing it like he's trying to hurt somebody, but even a game of ping pong, he's doesn't want to get beat," Grant said. "People will say he's super competitive because he's showing emotions, but if we do lose, he won't lose his composure. He's not going to be throwing a basketball or anything like that — it's all internal — so he won't show it but he's super competitive."

Since averaging "12 to 15 minutes a game" as a 6-foot, 9-inch freshman last year, Tolentino grew three inches and put on about 25 pounds — most of it in the weight room — since moving into the starting lineup this season.

"If you look at him from far, you would think he's super skinny and a twig, but if you get next to him you realize that his legs aren't skinny, so you can tell he's put on weight, just being in the gym, working with our trainers, it's given him confidence of wanting to be in there and lifting because he would shy away from things as a ninth grader because he didn't know how, but because he knows how to do things correctly now, he wants to be in there to work out and he's come a long way," Grant said.

Grant recalled that Tolentino was unable to do a single push-up last season. Just a few weeks ago he power-cleaned 155 pounds.

"So that's where he went in one year and it's scary because he's going to lift weights and he's going to get even stronger; the sky is the limit for this guy," Grant said.

Tolentino's father, Grant, played Division I volleyball at the University of Hawaii. He and coach Grant competed against each other in volleyball during their prep days. With the basketball season in the books, Sage has joined the boys volleyball team for their spring season.

"The dad is a tremendous athlete, too," Kelly Grant chimed in.

With Soares and Robben — who were also selected to the All-Tournament Team — set to graduate in June, Tolentino will be expected to take on a larger role as a junior next winter.

"Just his presence on the floor is the determining factor," said Grant, who compared Tolentino's importance to his team's title run to that of Kamehameha senior Christmas Togiai to the Warriors.

Togiai, a four-year starter and First Team All-Hawaii pick last season, did not play in Friday's game against Maryknoll because he tore the ACL in his right knee Thursday in his team's semifinal game against Kahuku.

"It's like Christmas not being able to play in our game, that was the determining factor. Not taking anything away from the rest of the Kamehameha boys, but the entire state knows that the team wasn't the same because they didn't have Christmas and if it that had happened with Sage for us, it would be the same way because of how we defend with him," Grant said.

For the season, Tolentino averaged 10.7 points per game and shot 76.4 percent from the free-throw line.

After finishing runner-up to Kamehameha in the Interscholastic League of Honolulu, Maryknoll won its four state tournament contests by an average of 16.7 points per game and took home the crown for the third time in program history.

The Spartans finished 31-4 overall and No. 1 in the final ScoringLive/Hawaiian Electric Power Rankings.

Frank Camacho, McKinley — Scored 26 points with three assists and one steal in a win over Hanalani

Colby Chun, University Lab — Scored 16 points with six rebounds, two steals and one assist in a loss to Seabury Hall

Ethan Escobido, Hanalani — Scored 16 points with three rebounds, one assist and a steal in a loss to McKinley

Bryce Forbes, Damien — Scored 18 points with six rebounds and two steals in a loss to Maryknoll

Holden Ioanis, Baldwin — Scored 17 points with six rebounds, five assists and three steals in a win over Leilehua and scored 21 points with five rebounds, two assists, one steal and a block in a loss to Moanalua

Masyn Johnson, Seabury Hall — Scored 15 points, including three 3-pointers, with 10 rebounds, three steals and a block in a loss to Roosevelt and scored 20 points with seven rebounds, two assists and two blocks in a loss to Kauai

Aaron Kwon, McKinley — Scored 11 points with 13 rebounds and two assists in a loss to Hawaii Prep

Logan Lasell, Leilehua — Scored 20 points, including five 3-pointers, with five rebounds, three steals and an assist in a win over Waiakea

DiAeris McRaven, Moanalua — Scored 16 points with seven rebounds and one assist in a loss to Damien and scored 12 points with 11 rebounds, two blocks, one assist and a steal in a win over Baldwin

Kordel Ng, Kamehameha — Scored 21 points with six assists, two steals and a rebound in a win over Leilehua

Darius Olloway, Kamehameha-Hawaii — Scored 13 points with 11 rebounds and two blocks in a loss to Moanalua

Isaiah Richards, Baldwin — Scored 27 points, including three 3-pointers, with four rebounds, three steals and one assist in a win over Leilehua

Kanoa Smith, Kalaheo — Scored 16 points with four rebounds, two assists and one steal in a loss to Maryknoll

Koby Tabuyo-Kahele, Kamehameha-Hawaii — Scored 17 points with four rebounds and two assists in a loss to Moanalua

Keane Tibon, Kauai — Scored 20 points with seven rebounds, four assists and one steal in a loss to Kohala

Christmas Togiai, Kamehameha — Scored 20 points with 12 rebounds, two assists and a steal in a win over Leilehua

Kaupena Yasso, Kamehameha-Hawaii — Scored 16 points, including four 3-pointers, with seven rebounds and two steals in a loss to Maryknoll

A look back at an OIA West matchup between the Bulldogs and Marauders that took place on March 27, 2019.

The Kamehameha baseball team's visit to the Friendly Isle earlier this month served as a homecoming for...

Kamehameha's Togiai is Division I POY

The Warriors went undefeated in ILH play and won every game in 2020 that Togiai suited up in.

The Pearl City junior was the pitcher of record in wins over Waianae and Kapolei and is now 2-0 with...

The senior southpaw tossed five innings of one-hit ball and batted 3 for 3 with two RBI against Waianae...