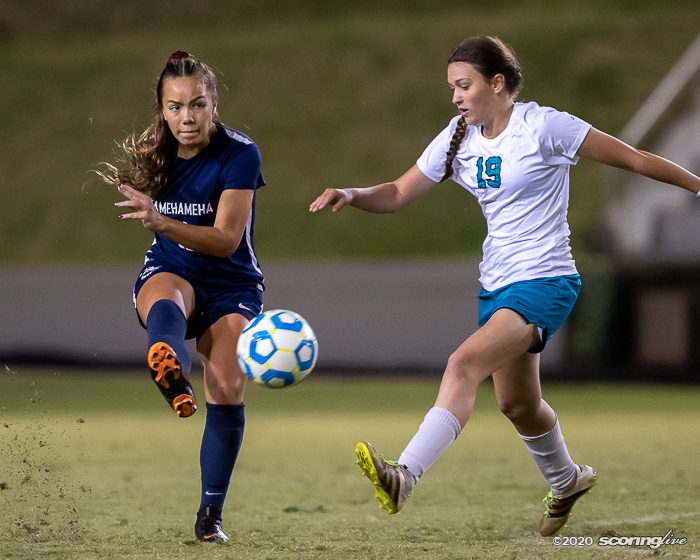 Kamehameha earned every bit of this title.

Kekaulike made sure of it.

Saturday's title game of The Queen's Medical Center/HHSAA Division I Girls Soccer State Championship was, at the very least, a really, really good soccer game and it wouldn't be a stretch to call it a classic that had the 350 or so spectators at the Waipio Peninsula Soccer Stadium at the edge of their seats.

While the Warriors ultimately came away with a 1-0 win for their second straight state crown and 10th overall, Na Alii certainly gave them a run for their money.

"What a game. Back and forth, back and forth. Man, that was a crazy. They were good, we knew they were gonna be good. Wow, is all I have to say; what a great opponent," Moore said of third-seeded Kekaulike, the previously-undefeated champion of the Maui Interscholastic League.

Na Alii tested the Warriors' defense early and often. Freshman speedster Leiala Aruda and sophomore Madelyn Dougherty made run after run and managed their share of shots, while junior Teani Arakawa and sophomore Ui Kaaihue played much bigger than their listed heights of 5-1 and 5-0, respectively.

They kept Kamehameha freshman goalkeeper Marley Roe busy for much of the night — all the way to the final minute of the game.

It wasn't until a Dougherty shot from about 25 yards out missed high and wide right of the goal with about 30 seconds remaining that the Warriors were safe.

"King K, they work really hard; they have a really high work rate," said Roe, who made four of her six total saves after halftime.

Roe said the key defensively was to limit the space that Arakawa and Kaaihue had in the midfield.

"They were very good, very good foot skills. We just knew we had to stay tight on (Arakawa) and (Kaaihue) — the mids, especially — so that we could just intercept their passing lanes and just stay hard and cut off all their opportunities," Roe said.

Sophomore Anuhea Aluli, who scored the only goal of the contest on a 35-yard blast into the top left corner of the goal in the 51st minute, agreed with Roe's assessment.

"We knew that they were gonna come hard at us and I think that just being able to intercept their passes, I think that was kind of the key for us, was to be able to win the middle," Aluli said.

Kekaulike's effectiveness in the first half forced Moore and her coaching staff to adjust — and readjust — after the intermission.

The moves ultimately paid off for the Warriors, who handed Na Alii not only its first loss of the season, but also its first shut out.

For Aluli, it's her second time experiencing a state title in as many years. To be sure, Roe relished her first time winning the big prize, but said her biggest motivation was to send the senior class of five out on top.

"It feels really good for our seniors," Roe said. "I feel like we were the weak seed coming in I guess, because Punahou was really strong and Iolani had 13 seniors this year, so I thought that it was really good for us to pull it off this year and prove that we were still good."

In her very first state tournament, Roe — one of six freshmen for the Warriors this season — proved her worth and then some.

As for Moore, this was hardly her first rodeo. Saturday's win leaves her one state championship short of tying her predecessor at the Kapalama campus — now-University of Hawaii coach Michele Nagamine — for the most by any coach aside from Hawaii Prep's Stephen Perry, who has led Ka Makani to the last seven D2 state titles.

"I mean, this feels like my first one, I'm not gonna lie," Moore laughed. "This was such a hard battle and it's always a hard season, so it just feels really good to get this one."

Forward Angel Asaah was selected as the league's POY while Charles Chong earned coach of the year.

Spartans start and finish at No. 1

Maryknoll repeated as Division I state champion with a win over Kamehameha last Friday.

The Spartans avenged three losses to the Warriors in ILH play to capture their second straight championship.