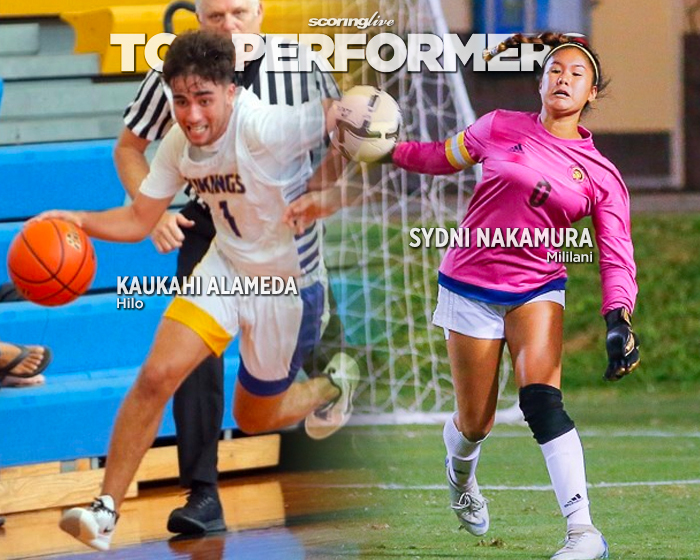 Male Athlete of the Week: Kaukahi Alameda, Hilo basketball
Four-year Hilo varsity player Kaukahi Alameda has been on the losing end of many games against district rival Waiakea in his prep career.

Eight games if you're counting.

But enough was enough for the senior guard.

Alameda scored 24 points with six assists and four steals to knock off the previously unbeaten Warriors in a 78-69 road win last Monday night.

Waiakea, who entered the matchup ranked No. 4 in the ScoringLive/Hawaiian Electric Boys Basketball Power Rankings, boasted a seven-game winning streak against Hilo and Alameda before the Vikings' victory.

Alameda was poised at the controls, using his athleticism to beat Waiakea's press and trap to get to the hoop. When defenders sagged off to defend the drive, he was comfortable with pulling up for the open mid-range jumper.

"That was one of his best overall games," Hilo coach Bruce Ferreira said of Alameda's performance. "I think he stepped it up and went into another level against Waiakea. He's been on the losing end against them whether it was preseason, regular season, or in the playoffs. I think he took it kind of personal and wanted to play his best basketball."

Alameda followed up his performance against Waiakea with a season-high 28 points in a 78-76 win over Honokaa last Wednesday.

"He really was on fire in that game," said Ferreira. "He ended up making a lot of layups, fast break layups and deep 3s, and his pull-up jumper has improved so much since his freshman year."

The Vikings needed every point that Alameda contributed as close games earlier in the season did not go in their favor. Hilo dropped a 59-57 contest to Konawaena and a 70-67 game to Kohala this season and was coming off a 54-44 loss to Hawaii Prep to start the week.

Ferreira said that sloppy defense contributed to these losses, but noted it improved last week in his team's victories, which included a 60-40 win over Pahoa on Saturday.

Scoring might be Alameda's ticket to getting ink about him, but his willingness to defend multiple positions has also been crucial, Ferreira said.

"He plays the shooting guard, but I asked Kaukahi on defense to play the forward position down low. We have to make sure we do block and out and hustle for balls, and Kaukahi has been up for it," said Ferreira, who added that Alameda has also played point guard due to injuries.

The Vikings' final score of the Honokaa game makes it seem like a back-and-forth game, but it was one where Hilo held a 24 lead in the fourth quarter. The Dragons quickly got back into it thanks to a few 3-pointers and a handful of three-point plays.

To swing momentum even more in Honokaa's favor, Hilo pulled two players from the game to nurse nagging knee injuries and also had two starters foul out with under five minutes to play in the contest.

With many key players out of the game, Ferreira said that it was a learning experience for Alameda to have to put trust in his other teammates who might not always been in pressure-packed situation.

Ferreira added that Alameda was a quiet kid in his underclassmen years, but has really stepped up as a leader.

"This year he's been more boisterous and learning the leadership role really well and I think he's done a good job."

Alameda's leadership was on display in the Vikings' Saturday win over the Daggers when Pahoa started to mount a comeback.

"Kaukahi spoke in the timeout and told the kids that we have to take care of the ball and settle down. He pretty much became a coach for a little while on the bench, and that's what I like from a good leader," said Ferreira.

Mililani reclaimed the OIA Division I crown, its 18th overall, last week with three straight shutout wins en route to the championship. The Trojans bested Waipahu in the second round by a score of 2-0, took down reigning league champ Aiea in a 1-0 showing in the semifinals and bested Moanalua by two goals in the title game.

At the forefront of the strong defensive effort was senior goalkeeper Sydni Nakamura, who longtime assistant and first-year Mililani coach Darren Smith described as a natural leader.

"She's extremely passionate and a lot of the girls really confide in her," said Smith, a former goalkeeper for the Mililani boys soccer team.

Smith recalled how Nakamura won the starting job in her sophomore year.

"When Sydni arrived, she already had a killer instinct. You really didn't have to push her in any direction. She would ask what do we need to do, and I break it down for her in any set up, in any situation, and she would immediately apply it. She's very flexible in that regard that she can immediately adapt."

Smith added that one of the things that has helped Nakamura's development is her ability to communicate exactly how she's feeling.

"She's very straight forward. If something doesn't make sense to her, we can have a conversation about it. She's wonderful in that we can be completely transparent with another. For that, her growth was rapid."

Another aspect that allows Nakamura to excel in goal is her poise.

"She's always cool, calm and collected," Smith said. "She doesn't really get frazzled. Over time she's evolved in that. She's a lot more fearless and is communicating with her teammates. She still has the same presence that when she plays, she goes 100 miles an hour. She's very good leading the back."

With Nakamura in goal, alongside center backs Jacey Jicha and Kamryn Shigemoto and outside backs Shaunee Egloria and Kiana Muratsuka, the Trojans (12-1) picked up their eighth, ninth and 10th shutout of the season last week.

Against the Marauders in the second round, Mililani was unable to find the back of the net until the second half. Smith noted that his team was getting frustrated about not scoring in the first half, but having Nakamura in goal helped stabilize the team until the Trojans manufactured their second-half goals.

"That was a very tactical game for us. We could see that we were getting a little frustrated that we weren't able to score, but Sydni definitely kept us level-minded and continued to talk in the back."

In the semifinals against Na Alii is when Nakamura really shined. She made four saves, with her biggest coming in the 65th minute.

After a Mililani defender misplayed a ball, Aiea's Brynn Shimabukuro gained possession and fired a shot from distance that went off of Nakamura's hands and off the crossbar. The rebound came to Aiea's Alyna Slater, who put another shot on goal, but Nakamura again came up with the save.

"Aiea definitely had more momentum in the second half, and that's where she keeps coming up big," said Smith, who also called Nakamura a "super hero" after the match.

"She definitely kept her head and she made a save at the goal line. I think our center backs and anyone in the backfield is completely confident that anything that may get past our backline that Sydni will be there to clean it up."

In the championship game against Moanalua, Nakamura helped direct the back line as the Trojans had one of their best defensive performances all season as they cruised to victory.

Nakamura and the Trojans will have a first round bye in next week's 12-state tournament. They are seeded second in the tourney and will host the winner between Hilo and Pearl City next Thursday in a 5 p.m. quarterfinal game in the main stadium at Waipio Peninsula Soccer Complex.

Tino Atonio, Damien — Scored 22 points in a win over Mid-Pacific

Jaydan Broad-Melander, Pearl City — Made four 3-pointers and scored 17 points in a loss to Hilo

Frank Camacho, McKinley — Scored 18 points in a win over Farrington

O'shen Cazimero, Kohala — Scored 19 points in a win over KS-Hawaii

Colby Chun, University Lab — Poured in 34 points in a win over Hawaii Baptist and 26 points in a loss to Hanalani

Mario Drummer, Kaiser — Made four 3-pointers and scored 17 points in a win over Farrington

Braeden Fujimoto, Aiea — Knocked down six 3-pointers and scored 18 points in a win over Waialua

Jake Holtz, Damien — Scored 18 points in a win over Mid-Pacific

Boo Jones, Konawaena — Scored 19 points in a win over Honokaa

Kane Kalua, Anuenue — Poured in 28 points with three made 3-pointers in a loss to Kailua

Davon Newman, Leilehua — Scored 18 points in a win over Campbell

Sky Okamura, Christian Academy — Made three 3-pointers and scored 19 points in a win over Lanakila Baptist

Wade Pimsaguan, Waimea — Scored 17 points in a loss to Kapaa

Kaimana Preza, Campbell — Scored 21 points in a loss to Leilehua

Geremy Robinson, Moanalua — Scored 27 points with three 3-pointers in a win over Kaiser

Kaiehu Schenk-Lee, Kalaheo — Scored 22 points with five made 3-pointers in a win over Aiea

Kanoa Smith, Kalaheo — Scored 19 points in a win over Kaimuki

De'Zhaun Stribling, Kapolei — Scored 16 points in a loss to Nanakuli

Justin Taylor, Kalaheo — Had a double-double of 12 points and 16 rebounds in a win over Kalaheo

Bobby Thompson, Kalaheo — Scored 21 points with three 3-pointers in a win over Kaimuki

Christmas Togiai, Kamehameha — Scored 23 points in a win over Punahou

Devin Vidad, Lanai — Made three 3-pointers and scored 20 points in a win over Saint Anthony

Rodney Villanueva, Radford — Poured in 20 points with four made 3-pointers in a win over Waianae

Mahalo Akaka, Maryknoll — Made four 3-pointers and scored 20 points in a win over Kamehameha

Taeya Blakeney, Kaiser — Scored 18 points in a win over Leilehua

Chloe Clemons, Kalaheo — Scored 18 points in a loss to Waialua

Ceci Enos, Nanakuli — Scored 23 points in a win over Roosevelt

Tatianna Kamae, Kahuku — Recorded a double-double of 10 points and 12 rebounds and added eight assists in a win over Kaiser

Caiyle Kaupu, Konawaena — Scored 21 points in a win over Waiakea

Lyxc Liana, Nanakuli — Scored 24 points in a loss to Kalani

Te'Hiwa Medeiros, Sacred Hearts — Recorded a double-double of 22 points and 11 rebounds in a loss to Damien

Lilehina Oyama, Kalani — Scored 22 points in a win over Waipahu

Trinity Ozoa, Waialua — Scored 19 points in a win over Kalaheo

Dominique Pacheco, KS-Hawaii — Scored 22 points in a win over Kohala

Lauren Poniatowski, Campbell — Made three 3-pointers and scored 21 points in a win over Waialua

Amalya Sales, Kauai — Scored 18 points in a win over Kapaa

Risa Sanchez, Kamehameha II — Made three 3-pointers and scored 20 points in a win over Iolani II

Kaye Serapio, Waimea — Scored 17 points in a win over Kauai

Raychelle Tavai, McKinley — Scored 26 points in a win over Waialua

Dayzee Wong, Castle — Scored 21 points in a loss to Kapolei

Dominic Gusman, Punahou — Notched a goal in wins over Iolani and Mid-Pacific

Jadyn Hanks, Konawaena — Scored a goal in a win over Kealakehe and two more in a championship win over Hilo

Kaelyn Moe, Radford — Recorded a hat trick in a win over McKinley

Alena Schnek, Sacred Hearts — Recorded a hat trick in a win over Damien

Through the lens: Michael Lasquero

SL photographer Michael Lasquero shares a collection of his favorite images of the 2019-20 season.