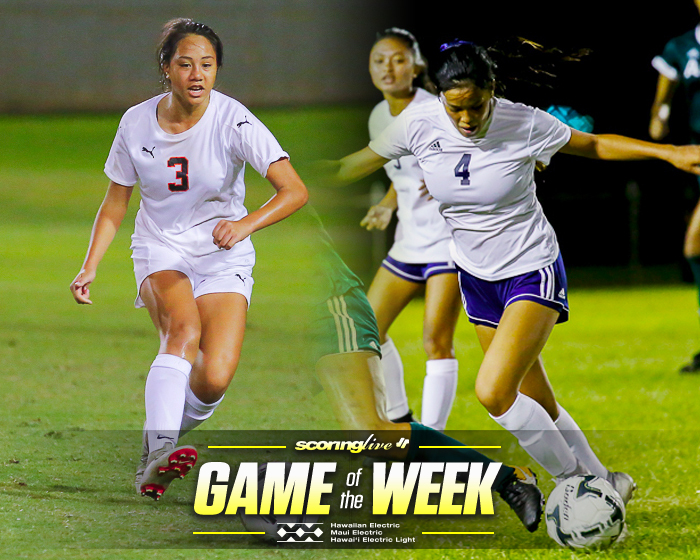 The schedule-makers did the Waipahu girls soccer team no favors.

For the second straight season, the Marauders open the up their league slate with an unenviable gauntlet of the top teams in the ever-formidable Western Division of the Oahu Interscholastic Association.

The schedule looks like this for Waipahu: Mililani, Pearl City, Kapolei, Campbell.

"We're starting with the big dogs again, just like last year," said Marauders coach Brent Murakami, whose team picked up a much-needed win over the Hurricanes Tuesday night after it was on the wrong end of three-goal final deficits against both the Trojans and Chargers.

"We knew we were going to pretty much have the toughest schedule to start and obviously we want to win, but if we could get a couple of good results in these four games especially, then that's what we're looking for," Murakami said.

What made matters even more trying for Waipahu was the fact that it went without a single preseason game. Murakami said he weighed the risk versus reward, taking heavily into consideration a lack of depth.

"We were asked to play in a couple of tournaments and I said ‘no' because I know our players are not able to play two, three games in two, three days. We only have 17 players and three of them are freshman. Maybe it could have helped us with our starters to get a little bit more chemistry outside of practice, but I felt that it could have hurt us more than it helped us with the potential of losing a player to injury," Murakami said.

What made last Friday's 4-1 loss to Pearl City an even tougher pill was swallow was the way the Marauders let a halftime lead slip away.

"The first half we were on fire and then (the Chargers) just came at us and one (goal) went in and then we couldn't get it in, (but) there are moments," Murakami said. "I think playing these tough teams to start off is good for us."

The Marauders rebounded via a 1-0 win at Kapolei Tuesday, with the lone goal coming from senior forward/midfielder Kaycee Manding on a corner kick in the 71st minute.

"At that point we just needed a win just for the morale of the team and then also for potential placement at the end of the season; We needed to beat one of these teams, for sure," Murakami said.

Manding, a four-year starter who is signed with South Dakota State for next season, will be a key piece for Waipahu this season, along with fellow-senior and goalkeeper Amelia Nelson.

"With (Nelson) being in goal I'm super confident. She doesn't get the recognition, but to me she's underrated and maybe not appreciated by anybody other than our team, but I think if she was a little taller she'd be the best keeper in the state," Murakami said. "She's such a hard worker; at practice she does things that other goalkeepers would not be doing. She wants to constantly train and she's key, Kaycee is gonna be key, too. We have a core of players we're going to need to depend on because we lost five seniors (to graduation) that started for four years, so that's definitely a huge hole for our team."

Campbell, who will visit the Masa Yonamine Athletic Complex for a 7 o'clock game against the Marauders Friday night, finds itself in a similar situation.

"We graduated a bunch of seniors last year, about 10 seniors and about five or six of them were kind of our core players," said coach James Curran, who earned All-Hawaii Coach of the Year honors after guiding the Sabers to a 12-5-1 record last season and runner-up finish in the Division I state championships.

Curran, however, took a different approach from Murakami when it came to readying his squad for the rigors of the OIA West.

"We had to figure our pieces out as far as who was going to step into our back line and our goalie position, so we got a lot of preseason games in for that reason," Curran said.

It wasn't until late November — the final week of the preseason — that things started to come together for the Sabers when they won three games in three days to capture the 48th Annual Ka Makani Soccer Classic hosted by Hawaii Prep on the Big Island.

"The first couple of weeks we played in a couple of tournaments and we were still trying to figure out who can fill certain roles, but I think up there we solidified our back line — which is (entirely) underclassmen, actually — and then we were able to work on some other things like our possession game and our attack," said Curran, whose notched wins over Kealakehe (8-1), Konawaena (2-1, in overtime) and Maui (2-1) en route to the eight-team tournament title.

But it was more than just the tactical adjustments and personnel changes that the trip provided.

"Being with each other for three days and doing everything together, sleeping in a classroom, that kind of broke down some walls and everybody got close, so I think it helped with communication on the pitch and just the bonding and the amount of time we had together was good for them because everybody comes from different clubs with different philosophies and different mindsets so different individuals come with a certain level of understanding and it's just about trying to get everybody to follow one plan, so things kind of started coming together after that," Curran said.

The Sabers will look to sophomore Cheyenne Mattos and junior Jourdyn Curran, the coach's daughter and an All-Hawaii First Team selection last year, to provide much of the pace out of their center-midfield positions.

Athena Edwards, a transfer from southern California, fellow-senior Haley Blossom Seleni will be the key forwards up top, along with freshman Jezarae Texeira, who will also see time in the midfield.

Two other freshman, Shaylin Banaay and Sharey Romero, along with sophomore Kailani Balbas will be pivotal on the fullback line.

"We're stoked about that because we graduated both keepers from last year," he said.

While Waipahu was thrown into the proverbial fire to start the regular season, Campbell has enjoyed the other end of the spectrum. It posted a 7-0 win over Waianae in its opener, followed by a 3-0 road win over Leilehua last Friday.

"I like how we kind of eased into the competition," said Curran, whose team is coming off a bye.

Three of the Sabers' last four games are against Mililani, Pearl City and Kapolei.

"Our schedule makes it so that we're able to kind of work on some things, knowing that we play the usual top seeds, the bigger dogs like Mililani and Pearl City late," Curran said.

That doesn't mean Curran is taking Waipahu lightly. After all, it was just last year when the Marauders netted two late goals against the Sabers in the final five minutes of regulation to force a 2-2 tie in their regular-season meeting.

"I'm pretty sure that (Curran) will remind the team of what happened last year," said Murakami, whose team went on to finish 7-2-2 and bowed out in the first round of the OIA tournament with an overtime loss at Kailua.

Despite Campbell's heavy losses to graduation, Murakami feels the Sabers remain one of the best squads in the league.

"They're the defending state runners-up — that wasn't by luck — they're a good team. I know they lost a few of their players, but they still have a good core of players there and James had a good thing going on over there," Murakami said.