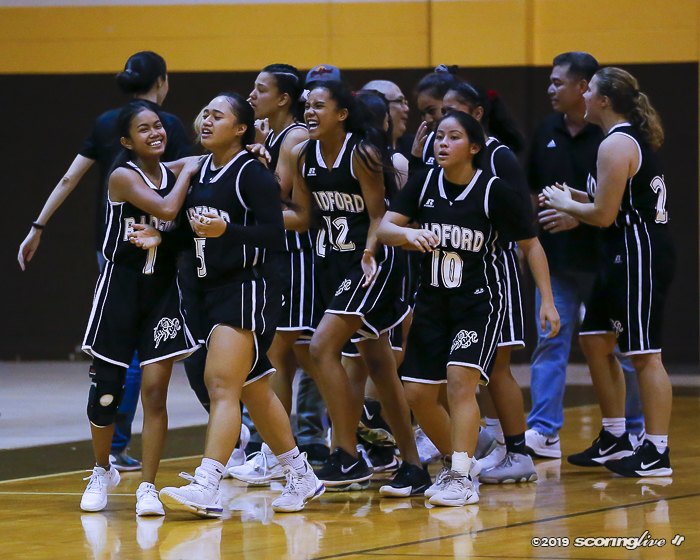 Close, but not enough. That's been the story in recent years for the Radford girls basketball team when it comes to divisional foe Mililani.

The Rams notched their first win over the Trojans since Feb. 10, 2015 with their 42-40 victory on the road Friday night.

"This was a big win for us," said junior guard Manutagi Seei, who led Radford with a game-high 14 points.

The Trojans have been a perennial contender for the Western Division's top seed in the Oahu Interscholastic Association Division I tournament. They finished first in the seven-team division in each of the past two seasons.

"We've been dreaming of this since we first got to high school, all of us, just beating the number one team in the West," Seei said.

The last two meetings between the teams produced low-scoring affairs, both going the way of Mililani. The Trojans won a nail-biter, 31-29, over the Rams two years ago and held on for a 26-21 win last season.

This time around, however, Radford would not let another opportunity slip through its hands — although it looked that way early on.

The Rams missed nine of their 11 free-throw attempts in the first quarter, but leaned on their defense to keep them in it. The game was tied at 8 after one quarter and again at 16 before a buzzer-beating Kianna Ponce 3-pointer gave Mililani a 19-16 lead at halftime. Radford chipped away in the second half and took a 28-27 lead into the final stanza.

But as irony would have it, it was at the free-throw line where it closed out the come-from-behind victory.

In the final minute of play, the Rams — who were in the bonus — drew non-shooting fouls on consecutive possessions to send Seei and Kailani Tenorio to the line, respectively. Each sank both ends of their one-and-one opportunity.

As a team, Radford made 14 of their final 18 free throws.

Tenorio, a junior guard, finished with 12 points. Angel Asaah added seven points in the win, but the sophomore forward's effort on the defensive end was of equal, if not greater importance.

The 5-foot-11 Asaah had the tough task of defending Ponce, Mililani's versatile forward.

Asaah picked up two fouls by halftime and a quick third early in the second half. Her fourth foul came with 4:43 left in the game and sent her to the bench. However, shortly after she re-entered, Asaah made a free throw to tie the score at 33. On Radford's next possession, Asaah grabbed an offensive rebound off a miss by Angela Howell and converted the putback to even the score at 35-all.

The Trojans had a chance to tie it at 38 with about a minute left, but Kylie Bagay's shot was off the mark and Asaah grabbed the rebound before finding an outlet to Seei, who was fouled shortly thereafter.

"Angel had a couple of unnecessary fouls early, but I think she did a phenomenal job on a really talented player for Mililani," Radford coach Charles Chong said. "I challenged her before the game, I said, ‘hey, they're gonna go at you,' and I said, ‘you gotta move your feet and just stay in front and try to deny her as best you can.' (Ponce) still got her points, but I thought Angel did a great job."

Seei concurred with her coach on the performance of Asaah, who limited Ponce to 12 points.

"I think she did an amazing job. That was her task from the beginning, she tried her best, yes, she fouled a lot, but regardless with the help or not, she held her ground," Seei said.

"But she stayed out of it enough, so she played smart enough not to really hurt their team, yeah, she's a force," Oyama said.

Chong was proud of his team's poise to rally from a five-point third-quarter deficit Friday.

"Well, we've got four seniors who have been around for a long time and this is probably the deepest team I've had at Radford and I really — for their sake — I really want them to have a good, successful season," said the sixth-year Rams coach.

They're certainly off to a promising start.

A 20-point win over Kapolei Wednesday to open the regular season, coupled with the monumental victory over Mililani Friday put the Rams (5-2 overall, 2-0 league) in first place through the first week of the 10-game regular season.

"Two wins against two really good programs, I can't ask for too much more, you know? We got some momentum, we just gotta keep it going," Chong said.

Radford will take a break from league play for this week's Iolani Girls Classic. The Rams will play reigning D1 state champion and tournament host Iolani in a 6:30 p.m. quarterfinal Thursday.