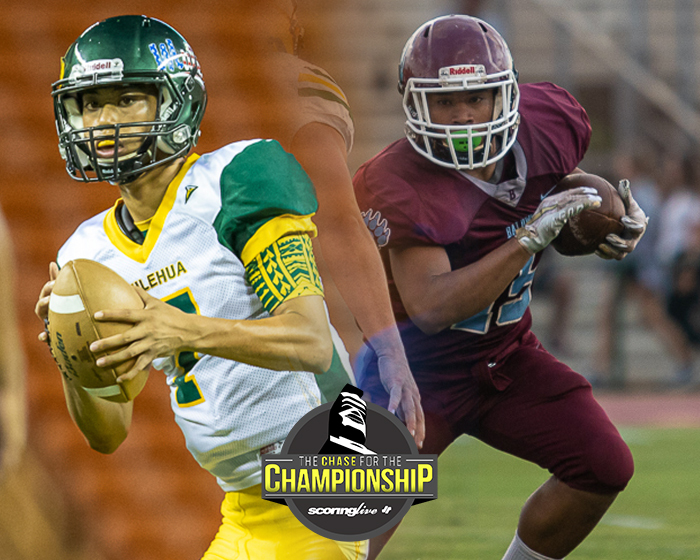 Leilehua travels off island Friday night to take on Baldwin at War Memorial Stadium in the Mules' first trip to Maui since 2010. Michael Lasquero | SL

It's been nine years since Leilehua and Baldwin last met at War Memorial Stadium and both teams are eager to end the layover and to make the most of their postseason opportunities to open the First Hawaiian Bank/HHSAA Division I State Football Championships Friday.

The two teams have a history meeting in the state tournament and Leilehua has had Baldwin's number in the past three matchups. The Mules won a high-scoring semifinal affair, 41-34 en route to clinching the state title in 2007 and defeated the Bears in the first round in 2008 and 2010.

The last time the Mules and Bears made it to the state tournament dates back to 2016 when the three-tiered format was introduced for the first time.

"We put it in our perspective and there's 15 teams left, five in our division, and being able to travel. For some of these kids, it will be the first time traveling. That's incredible for me to think, a lot of these kids never had these opportunities or experiences. For them to have it now through this team, through their hard work together, it's a huge reward for them," Leilehua coach Mark Kurisu said.

Leilehua came off a gut-wrenching 21-20 loss to Moanalua in double overtime in the Oahu Interscholastic Association Division I title game on Oct. 26. Despite coming up short, the loss has put things in perspective for the team as it heads into the state tournament with a clean slate.

"It's been a while since we've been in a championship game. We gave ourselves a chance to get one, it was a great opportunity. It's a great learning experience, this is the first class in a while that's never been in a championship series or getting into states. It's a reboot for our program playing at a high level," Kurisu said of the program's progression.

The long bye weeks has its pluses and minuses. It does throw off the week-to-week routine, but it allowed the team to heal up and focus on academics.

"It's been rough, because you're used to dialing in: a week of practice and game day Friday. It's been good for us getting healthy. A couple guys were banged up after the Moanalua game. We'll be good to go this Friday," Kurisu said.

The Mules turned to Kekoa Turangan as their signal caller and has thrown for 1704 yards, 21 touchdowns and nine interceptions on the season.

Kalei Akagi, who started at QB to open the season, transitioned nicely to receiver adding 45 receptions for 552 yards and four TDs.

Turangan has the luxury of throwing the ball up for grabs to big targets Jayzon Ramos (6-foot-1), who leads the team in scoring and receiving with 874 yards and 11 TDs and Jonathan Vasquez (6-foot-2) adds 403 receiving yards and six TDs.

"We have been trying to have the right packages. That's what Kalei (Akagi) does for us in our wildcat and that's what Kekoa (Turangan) does in our open and run sets. Each guy has their own strengths and it opens up some windows and opportunities you have to scheme around. Coach Andrew (Manley) does a great job calling the offense and the o-line is playing great," Kurisu said.

Jamil Vereen is another versatile weapon for a Leilehua offense churning out 343.5 yards of total offense. Vereen rushed for 623 yards and four touchdowns since being promoted from JV and had a season-high 30 carries for 153 yards and a pair of scores in the OIA title game.

"He's a break away guy. He's not a pound-it-down-your-throat type of guy, he has that break away speed and he has hands and has some receiving touchdowns," Kurisu said of Vereen.

"That's why we were practicing with Lahainaluna on Wednesday to show us the speed. They're in shape and have the speed. Lahainaluna has done a great job and gave us a good look," Baldwin coach Pohai Lee said of preparing for the Mules' dynamic offense. "Leilehua has three good receivers, two solid running backs and they take the pressure off their quarterback."

Junior cornerback Selau Aiava has a knack of coming up with timely interceptions: a pick to seal the win against Iolani in the end zone on Oct. 5 and another pick against Waipahu to send the Mules to the OIA title game.

"They are a bunch of young guys who came together and had a great season. Learned, matured, and they're learning how to lead. They are leading our younger kids and show them the ropes, tell them what to expect. No such thing as being shy, you have to talk and be vocal out there. Just getting that done has made a big impact the way our defense has been playing," Kurisu said of the defense coming together.

"They're very dynamic, they're very good on defense, they move around and have great athletes with good size. Offensively, they do a lot of good things schematically. Andrew Manley handling the offense and it's going to be a big challenge for us. We're fortunate we're at home," Lee said of the Mules.

It's been an up-and-down season for the Bears coming into the state tournament with a 5-4 overall record and 5-3 in Maui Interscholastic League play.

"That was our goal is to try and get better every week. We had inconsistencies, more on offense than anything else. Defensively, we came around, it's a tight-knit group and a lot of chemistry. That was the biggest turnaround for us from last year to this year is our defense doing well and giving us opportunities in the form of turnovers. Offensively, we're hitting our rhythm a little bit, a lot of new receivers and running backs, it takes a little while," Lee said of how the season went.

Baldwin had back-to-back wins over Maui and Kekaulike on Sept. 13 and 20, and went 2-2 to finish the regular season that included a 40-point shutout win over Kekaulike.

"The last game of the season, we hit on all three phases. The competition has grown on Maui, Kamehameha-Maui, Lahainaluna, Maui High, King K, everyone was better. Every game we were challenged this year," Lee said, referring to their 40-0 win over Na Alii on Oct. 25.

Lee points to the defense being the team's strength, giving up 99.4 rushing yards to opponents.

"Nephi Laga, he's an undersized defensive lineman, he's a senior, he's active and very quick. Josiah Sniffen, Nathen Foster, our linebacker who is a hybrid and can play d-end as well. Jeddidiah Nerpio is our top DB, great kid. All those guys are active and great kids," Lee said of playmakers to look for on the defense.

Laa Asuega-Stark leads the team with 1,071 passing yards and threw 11 touchdowns and 11 picks on the season.

"Laa has been inconsistent this year and maybe due to the people around him getting a rhythm. It doesn't stop him from competing, he's a hard worker and has great work ethic. He's been in the system now for two years. It's getting in tune with the other guys, he's a leader on offense," Lee said.

Isaiah Souza leads the team in rushing with 359 yards and Asuega-Stark has four rushing touchdowns on the season.

Kapena Kamai leads the team in receiving with 29 receptions for 402 yards and four TDs. He also doubles up as a defensive back.

"He's doing a great job letting the game come to him. Before he would try to force things. Being that it's his senior year, he's shown great maturity and he's made plays when he had to and he's another leader for us offensively," Lee said of Kamai.

"They're explosive offensively and have a sound defense. Pohai is coming from the college and elite level. Always well-coached, they have skilled playmakers, linemen are huge," Kurisu said of the Bears.

Kickoff is slated for 5:30 p.m. The winner advances to the semifinals play top-seeded Hilo on Saturday, Nov. 23 at Wong Stadium.

Visiting Buffanblu won the opening period, 16 to 3, and never looked back in Monday win.

Iolani pulls away in second half to repeat as ILH champs

Raiders trailed by three at the half but outscore the Spartans the rest of the way en route to a second...

Kailua advances to OIA quarters with win over Waianae

Surfriders scored goals in the latter stages of both halves to earn 2-0 victory over the Seariders.

Punahou boys, Kamehameha girls sit at No. 1 in soccer

The Buffanblu and Warriors locked up the ILH's boys and girls league crown respectively last week.

Moanalua will meet reigning champion Kahuku this Wednesday for the OIA Division I championship.