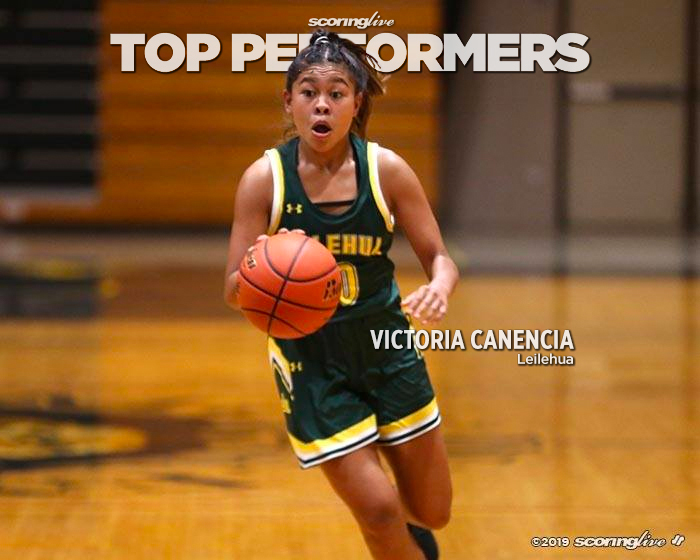 "She took a back seat to Asia and Kamelamela last year, so she kind of understood what was expected out of the two stars, but now she's taken on to that role," Dumlao said of Canencia.

The transition from role player to go-to player is a work-in-progress, to be sure, but it's one that began for Canencia even before last year ended.

"In the offseason I mentioned to her that she was going to be our leader, but even from the end of last year when teams were denying Kaylen the ball — who was our primary ball-handler — I told (Canencia) that ‘it's your time now to step up because this is how it's going to be next year,' so she kind of saw it a little bit in the playoffs last year and she's gradually growing into that," Dumlao said. "I told her that she's not Asia, she's not Kaylen. She has her own style, but it will fit right into what we we do."

Canencia and the Mules (1-0) got off to a good start with a 38-29 win over visiting McKinley at Paul T. Kobayashi Gymnasium Saturday night. It was the preseason opener for both teams. Canencia posted nine points with seven steals, four rebounds and two assists in the victory.

"What I liked about what she did was control the ball, take care of the ball and not turn it over," said Dumlao, who saw his team's 11-point halftime lead dwindle after a run by the Tigers in the third quarter.

"She got double-teamed, triple-teamed at times, but she moved the ball around to get away from the pressure. McKinley made a 12-0 run in the third quarter and they kind of denied Victoria the ball and let other girls have it. We forced it, we weren't patient, but she slowed it down, found the open people — she made a few mistakes, but that's part of the growth — but it was her taking care of the rock, she had a couple good assists, found some people under the basket she played very unselfishly," Dumlao said.

Canencia made her team's lone 3-pointer of the game and shot 4 of 6 from the free-throw line, but it was her seven steals that led to handful of points off of turnovers in transition.

"I think that's one of her strengths. A lot of times the (opponent) turned her back on (Canencia) and she would come from behind and steal that ball," Dumlao said. "She's got knowledge on that defensive side of the ball. She knows how to double-team and then recover real quickly if she gets beat, but she can see things happen before they happen on the defensive side and great players do have great anticipation and I think that's one of her great traits right now is anticipation on the offensive and defensive side."

Dumlao pointed out that Canencia, who has been a starter for Leilehua since transferring from Moanalua before her junior season, comes from family rich in basketball talent.

"You've got to understand that she's a Canencia and that's a basketball bloodline. Her father (Bryan) has bee a club coach for a long time and her uncle (Randy) is probably one of the greatest guards in University Lab School history, so one of her strengths is understanding the game. She's like a coach on the court and she's helping her younger teammates along, which has been helping me out a little bit," Dumlao said.

It's not just her basketball IQ that makes her a special player in Dumlao's eyes, it's also her work ethic.

"She was really committed in the offseason in the weight room and doing some speed work and she's also being more vocal now. Last year you wouldn't think she had a voice because she said nothing in practice, not even ‘come on, let's go,' " Dumlao recalled. "She was kind of a shy person being a new student at Leilehua when she transferred over, but it's that vocal leadership that's appearing now and coming in with her confidence. When the girls don't feel right asking me about certain offensive or defensive schemes, they go to her and when she don't know, she comes to me, so she's really stepped up her vocal leadership and I'm really proud of her for that."

Canencia has developed into an all-around player, one that the Mules will rely on to shoulder the load this year.

"She's a great passer, great vision, she's an above-average ball-handler, she's a slasher, can penetrate and dish, but her strength is her vision and her knowledge of the game," Dumlao said. "She understands the system that we're trying to run. Her and (sophomore guard) Mariah (Galletes) are going to be our two leaders."

Dumlao said Canencia and Galletes are setting the tempo in early-season practices.

"They'll block each other's shots, steal each other's ball, but they'll be going down court giving each other a high-five on opposing teams," Dumlao said. "It makes practice fun; that's how close they are. It's fun to watch the girls have fun and learn together. As a coach you like to see that, the fruits of your labor, so I'm just enjoying practices right now."

Canencia is one of five seniors on the Mules' roster this season, which also includes two juniors, three sophomores and one freshman — her younger sister, Shanna. Dumlao said the relationship between the sisters is a competitive, but nurturing one.

"They compete, they bang each other, they fall on the ground, but they pick each other up and they high-five, so they have a good relationship and that's what is special about this team. I've had more talented teams, but this team is so close," Dumlao said. "They love each other, they play for each other — it's just that they're inexperienced — but that's why I loaded up on preseason games and hopefully good things happen down the road for us, but that will start with my veteran players like Victoria understanding the game and hopefully that bleeds off to the other girls."

Canencia and the Mules will stay busy with three home games this week — Castle Tuesday, Kaimuki Thursday and Kaiser Saturday — before traveling to Maui to take part in a 10-team tournament hosted by King Kekaulike Nov. 20-24.

GIRLS BASKETBALL
Kyanna Balinbin, McKinley — Had 10 points, including two 3-pointers, and a steal in a loss to Leilehua

Alexis Dang, Hawaii Baptist — Scored 13 points with eight rebounds, four assists, one steal and a block in a win over Moanalua

Mariah Gallestes, Leilehua — Had 11 points, seven rebounds and a steal in a win over McKinley