Top Performers
Mahiai stepped up to the plate for KS-Hawaii 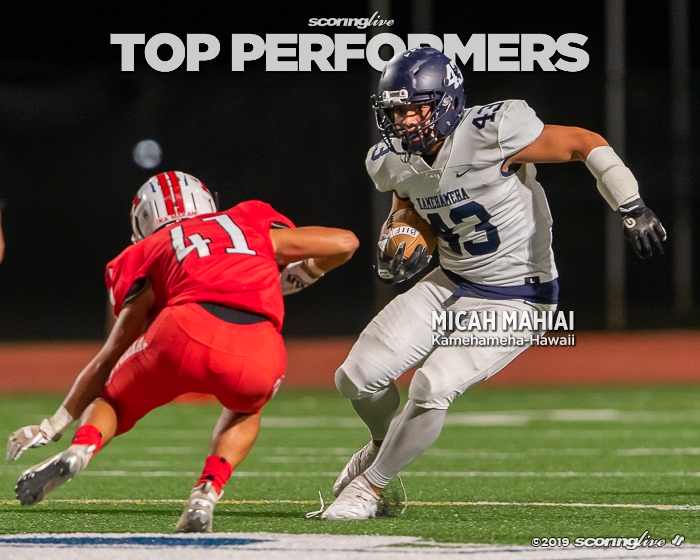 With senior starter Apu Alfiche out due to injury for last week's Big Island Interscholastic Federation Division II championship game against Hawaii Prep, Mahiai picked up the slack with 108 rushing yards and a touchdown on 16 carries to lead the Warriors (10-3) in a 16-0 win.

Mahiai averaged 6.8 yards per carry — which is actually below his season average of 9.0 — and scored the Warriors' lone offensive touchdown on a 5-yard run midway through the third quarter, but it was his consistent production — and protection — that stood out most to his coach.

"He was really, really consistent and steady throughout," Perry said. "Micah runs hard, he had great ball security and he got us those hard yards when we needed them."

The Warriors got 203 passing yards through the air from junior quarterback Koby Tabuyo-Kahele, but were hindered by a large number of dropped passes. That made Mahiai's run production all the more important.

"It's very important to move the chains. Micah got the chains moving and kept drives alive and didn't fumble," said Perry, who pointed out the heavy workload Mahiai had specifically on the drive that was capped with his eighth touchdown on the season, which extended KS-Hawaii's lead to 10-0.

"He must have carried the ball four or five times, or more, on that drive," Perry recalled. "We completed a nice pass on a fade route to get us closer (to the end zone) and then we kind of pounded it in with Micah after that. I want to say he carried the ball at least three times in a row before he scored."

In the regular-season finale against HPA two weeks ago, Mahiai carried a season-high 18 times for 75 yards with two touchdowns. He has rushed for a team-high 588 yards on the season, with eight touchdowns.

"The guy is a great athlete, but he's also a hard worker. I mean, he doesn't miss a practice, but I would say with him, it's fifty-fifty right down the middle between hard work and natural talent." Perry said. "As a running back, your body takes a pounding, but I love him at running back because he's got the eyes and the feet and running back is one of those positions that you have to have those instincts and that feel for the game."

Mahiai's athleticism isn't limited to running back as he also excels on the defensive line.

"Since (Alfiche) went down and couldn't play in this last game, Micah had to carry the load (at running back) so that meant he didn't get as many defensive line reps, but for the majority of the season he was rotating in on the defensive line and he can play both inside (at tackle) and on the end," Perry said. "He's just an athlete, the kid is a big athlete. He's got a lot of strength, he's got a pretty active motor and we've got some fast guys, we've got some power guys, but he's got a nice combination of both and he's a team player, too."

Mahiai, who also competes in canoe paddling for the Warriors, figures to play an even larger role for the football team in years to come.

"I really, truly hope so and I think the sky is the limit for him," Perry said. "If he chooses to do football (in college), he'll find a home at some level. He's got great grades and a good work ethic and if he wants to he can become a CEO, a captain of a canoe — I'm telling you, he can do it. He can do anything that he puts his mind to — so I'm not going to limit him."

While the sophomore has been a terror for opposing defenses as of late, he's done so without any kind of a mean streak.

"He's a nice kid, he's always got a smile on his face, always giving aloha, always has something funny to say. On the field he's even-keel out there and he just knows how to turn it on, but he doesn't get too high emotionally or too low," Perry said. "He's just got a great attitude."

The Warriors sealed Friday's win with a defensive score in the form of Joshua Luiz's 57-yard interception return for touchdown in the closing minutes.

It was KS-Hawaii's third win over Ka Makani this season and completed an unblemished 9-0 record in league play. It captured its second straight BIIF title and state tournament appearance.

Mahiai and the Warriors are seeded fourth in the First Hawaiian Bank Division II State Championships. They will host Oahu Interscholastic Association runner-up Roosevelt in a first-round game at Paiea Stadium on Nov. 16. The winner of that game will advance to meet top-seeded Lahainaluna in the semifinal round.

FOOTBALL
Lawaialani Brown, Saint Louis — Had 7 1/2 tackles, including one TFL, in a win over Punahou

Brian Cox, Saint Louis — Had seven tackles in a win over Pyunahou

Jayden de Laura, Saint Louis — Threw for 355 yards on 22-of-32 passing with one interception and rushed for two touchdowns in a win over Punahou

Koa Eldredge, Punahou — Caught nine passes for 64 yards and a touchdown in a loss to Saint Louis

Kilohana Haasenritter, Hilo — Caught seven passes for 68 yards and a touchdown and intercepted a pass in a win over Konawaena

Kawelo Huddy, Waimea — Rushed for two touchdowns and threw a TD pass in a win over Kauai

Joshua Luiz, Kamehameha-Hawaii — Had two tackles, one TFL, broke-up a pass and scored on a 37-yard interception return in a win over Hawaii Prep

Zachary Machold, Hawaii Prep — Had 11 tackles and a fumble recovery in a loss to Kamehameha-Hawaii

Legend Matautia, Punahou — Had 9 1/2 tackles, including one TFL, in a loss to Saint Louis

Kyan Miyasato, Hilo — Threw for 297 yards and five touchdowns on 19-of-33 passing without an interception in a win over Konawaena

Guyson Ogata, Hilo — Caught seven passes for 143 yards and three touchdowns in a win over Konawaena

Joseph Roback, Konawaena — Blocked a punt and recovered it in the end zone for a touchdown in a loss to Hilo

John-Keawe Sagapolutele, Punahou — Threw for 159 yards and two touchdowns on 24-of-40 passing with one interception in a loss to Saint Louis

Koby Tabuyo-Kahele, Kamehameha-Hawaii — Threw for 203 yards on 15-of-35 passing without an interception in a win over Hawaii Prep

Isahn Ulanday, Waimea — Recovered a fumble and intercepted a pass in a win over Kauai

Through the lens: Michael Lasquero

SL photographer Michael Lasquero shares a collection of his favorite images of the 2019-20 season.