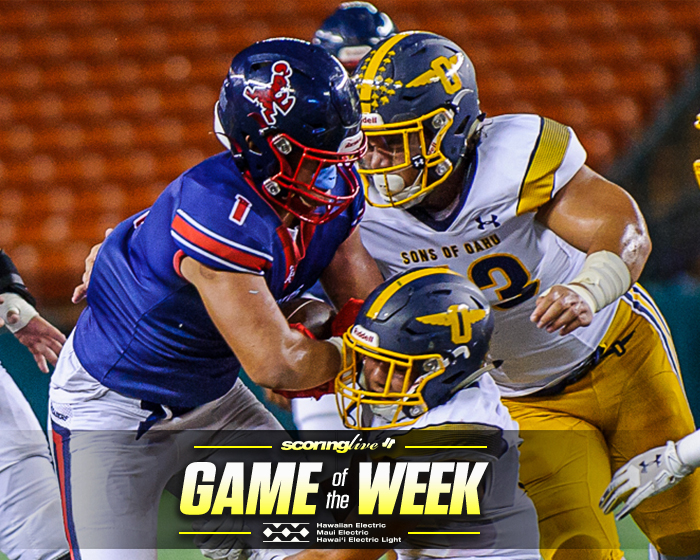 A win over the Buffanblu would give Saint Louis a fifth consecutive league championship. John Lujan | SL

One-thousand, one-hundred and twenty-eight days. Come Friday, that's how long it will be since the top-ranked Saint Louis football team last tasted the agony of defeat.

The Crusaders (9-0) have run up a string of 35 consecutive wins since then and find themselves on the verge of a fifth straight Interscholastic League of Honolulu championship.

All that's standing in their way is No. 2 Punahou.

And all the Buffanblu (10-1) have to do to dethrone the three-time defending Open Division state champions?

"I think the first thing you gotta do is win the first game," said Punahou coach Kale Ane, whose team will take on the undefeated Crusaders in the ILH tournament final Friday.

Kickoff is scheduled for 6 p.m. at Aloha Stadium.

"I think you know what you've got with them: they're a quality team with great coaching, great athletes and they've always risen to the challenge," Ane said.

It was the Buffanblu who gave Saint Louis its toughest test-to-date when the teams met in the regular season on Sept. 20.

Punahou's Vincent Terrell returned the opening kickoff 94 yards for a touchdown. It held a 16-6 lead at halftime, but saw the Crusaders rally with 19 second-half points, including a pair of Koali Nishigaya touchdown runs, to storm back for the 25-19 victory.

"I think the first game showed us that we can play with them if we can play really well, so our job as coaches is to put the kids in a position that they can be successful and get them to play at a high level," Ane said.

Punahou registered eight tackles-for-loss, including five sacks, and four takeaways in the loss to the Crusaders.

"We try to remind them that we were successful," Ane said. "We had some good plays and we had a chance to compete until the very end, so I think the mindset is there. They know they can compete, they know they don't have to be perfect to compete and if they just follow the game plan they have a great chance."

The second quarter against the Buffanblu represented the only quarter in any first half of a game this season that Saint Louis was shut out.

"Defensively they really rally to the ball and get after it," Saint Louis coach Cal Lee said of Punahou, which has limited opponents to just 8.8 points per game, while averaging 30.7 points on offense.

"Offensively they can move the ball with their passing game and their running game and he's a good runner, Terrell," Lee added.

While the Buffanblu defeated Kamehameha by 27 points last week to set-up Friday's tournament final, Saint Louis has not played a game since a 30-point victory at Waianae to end the regular season on Oct. 11

"It's going to be three weeks since our last game, but what else can you do? You gotta practice and I'm sure once the game starts you get the rust off and then you start playing," said Lee, whose team played nine consecutive weeks without a bye.

"After nine weeks I think you really want to take a break off, but it's been kind of long — three weeks is kind of long — but it is what it is. You can't do anything about it but practice and hopefully you stay in tune," Lee said.

The Crusaders are averaging 39.9 points, while holding opponents to 14.7 points per game, but it's often the third phase of the game that gets overlooked, Lee said.

"As you saw last week with Kahuku, special teams is very important, so we put a lot of emphasis on special teams this week and the last week to make sure that we can't anything for granted; we gotta play good special teams," Lee said, referencing the 93-yard kickoff return for touchdown that served as the winning score for the Red Raiders in last Saturday's OIA Open Division final against Mililani.

While Ane certainly wouldn't mind seeing his team open Friday's game with another quick score, he knows that it will take more than that to take down the No. 6 team in the nation, according to both USA Today and MaxPreps.

"It's always great to get off to a great start and I think it doesn't necessarily have to be a touchdown — it can be a big play, a 20-yard-plus play, although it's always nice to get a touchdown — but we know in order to win the game, we've got to sustain drives offensively, we've got to cut down on our mistakes and turnovers, play smart and we need to maximize field position," Ane said.

The Buffanblu sustained some "bumps and bruises" in their win over Kamehameha last week, but Ane said he does not expect it will affect anyone's availability Friday.

"It was a pretty physical game, but the kids are gonna play as long as they can play. It's been a long season and very physical, but our kids have been resilient and they worked hard to come into the season in shape," Ane said. "We're just like every else at this point in the season, banged up, but the kids will be ready to play."

A win by Saint Louis would give it a 36th straight win and the ILH's lone spot in the First Hawaiian Bank Open Division State Championships, which gets underway on Nov. 22.

A Punahou win would force a winner-take-all rematch for the overall ILH title and state tournament berth next Friday at Aloha Stadium.

Rebels off to hot start, thanks in part to Capllonch, Oliveira

Cowboys made history in 2020 with first state basketball championship

Eagles and Warriors boys and girls played Friday at Kekuhaupio Gym and Saturday at Dan Liu Gym, as part...

Junior infielder Wyatt Young, a 2018 graduate of Mid-Pacific Institute, has started all 64 games of his...