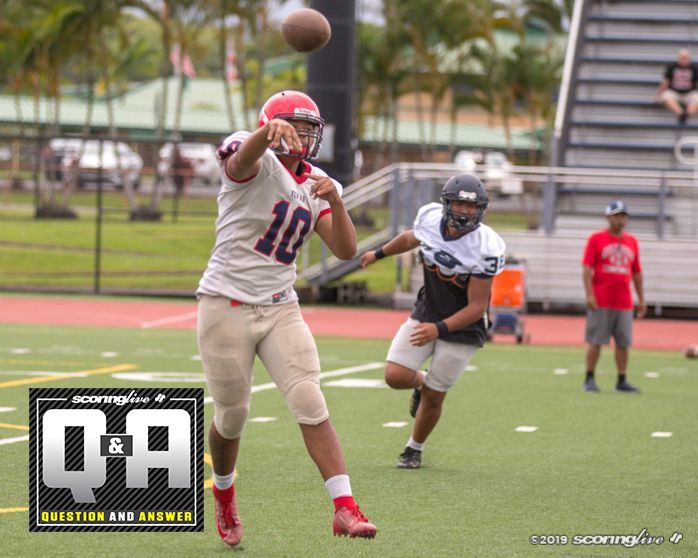 For both the Keaau and Waiakea football teams, the postseason may be out of the picture in 2019, but there remains a lot of play for nonetheless.

The teams will cross paths for a second time this season when the Cougars (2-6 overall, 2-6 league) host the Warriors (0-9, 0-8) in a Big Island Interscholastic Federation Division I game Friday night.

Their first meeting this year — an early-afternoon game at Waiakea's Ken Yamase Memorial Stadium on Aug. 31 — resulted in a 52-14 Keaau victory.

A week later, the Warriors made headlines for unfortunate reasons after it was on the wrong end of a 104-0 score against six-time defending league champion Hilo. It is one of the five times that they have been shut out this season.

Keaau has also been shut out five times this season, but with its 13-12 overtime victory over Honokaa on Sept. 20, it matched last year's win total.

The Cougars went 2-5 a season ago, but a win over the Warriors Friday, coupled with a victory over the Honokaa next Thursday — the final week of the BIIF regular season — would mark the program's most wins in a season since 2011, when it finished with a 4-7 record.

We caught up with Waiakea coach Neil Azevedo and Keaau co-head coach Ian Van Cleave a few days before their teams face off in East Hawaii.

ScoringLive: Describe your team's current situation in one word and explain.

Ian Van Cleave, Keaau co-coach: "Revamp. Fall break is over, senior night this Friday, last game of the season next week. It's time to show up and get excited."

What have the scores not reflected about your team?

Azevedo: "Their commitment. They keep coming back and coming back. They don't stop fighting, they keep going and those boys are really respectful to everybody out there. They don't fall into things like unsportsmanlike penalties, they don't carry themselves into that kind of situation; they walk away from it."

Van Cleave: "The talent we have on offense. We've really struggled offensively this year, even though we've got a few guys that are very talented."

Which game this season has proven to be the most beneficial to your team, regardless of result?

Azevedo: "The Hilo game. Even though it was 104 to zero, they showed character by coming back on Monday and we had more boys come out, too. They showed loyalty to their district, their school and where they come from. After that game I was wondering if Monday we would have enough boys. I didn't know how the boys would react, but we had 40-something that day, we had a bunch of boys come out and they wanted to play."

Van Cleave: "I think it would be our overtime win over Honokaa at home. We showed a lot of resiliency, teamwork and excitement."

Who has provided the leadership on your team? Who has been an unsung hero?

Van Cleave: "(Senior quarterback) Bryant Respicio-Mercado and (senior offensive lineman) Hunter Nasworthy have been our leaders from day one. A sort of unsung hero has been (senior wide receiver/defensive back) Justin Kasai. He is willing and eager to do anything the team needs him to."

What are your thoughts on this week's opponent and what kind of problems do they pose?

Azevedo: "They're a tough team. Tough team, their quarterback (Respicio-Mercado) is strong and they're very aggressive."

Van Cleave: "This is not the same Waiakea we played last time. They have a few more players eligible and have improved a lot."

Azevedo: "We minimize turnovers and control the game clock."

Van Cleave: "We are successful offensively."

Kickoff between the visiting Warriors and host Cougars is scheduled for 7:30 p.m. Friday.

Images from scrimmages from McKinley, Saint Louis, Iolani and Punahou.