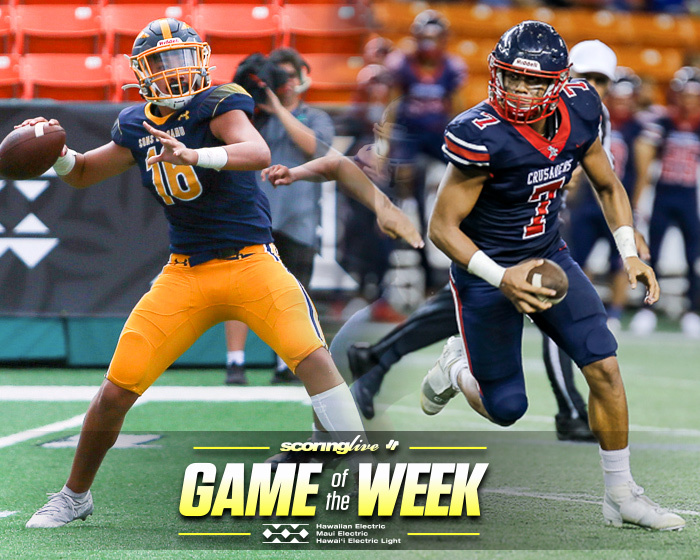 John-Keawe Sagapolutele (left) and the Buffanblu set to clash with Jayden de Laura (right) and the Crusaders in the nightcap of an ILH doubleheader at Aloha Stadium. ScoringLive photo illustration

Another week brings another test for the state's top-ranked team.

Since a monumental win over Nevada-powerhouse Bishop Gorman at the end of August, Saint Louis chalked up one-sided victories over Kamehameha (42-7) and Kahuku (28-0).

The contest against the Red Raiders last Saturday was called at halftime due to a power surge at Aloha Stadium that left the lighting unstable. The lone touchdown surrendered by the Crusaders in their last two games came on a pick-6 with backups in the game.

"Yeah, you can't be too unhappy with the way they're playing defense, keeping your opponent from scoring, we're happy about that, sure," said Saint Louis coach Cal Lee, whose team will face No. 3 Punahou at Aloha Stadium Friday night.

The Crusaders (5-0 overall) and Buffanblu (6-0) are two of seven teams across the state without a loss; the only other undefeated team in the Open Division is No. 2 Mililani (6-0 overall, 4-0 OIA Open).

Count Punahou coach Kale Ane among those who were pulling for Saint Louis against the Gaels of Bishop Gorman three weeks ago. This weekend, however, will be a different story.

"We're very proud of them when they play anybody but us, especially when they compete against teams from other states," Ane said of the Crusaders, who are ranked sixth and seventh, respectively, by USA Today and MaxPreps.

"They pose a lot of problems and it starts with Cal. He does a great job of motivating them and getting them prepared, as well as his assistant coaches. If we had a high school hall of fame in Hawaii, they would all be in there," Ane said. "They have great athletes, but they're also very mentally tough and compete every week, so our margin for error is very small and we will have to play alignment and assignment."

The average margin of victory for the Crusaders is just a shade under 25 points. Offensively they are averaging 36.6 points and 365.4 yards per game. Quarterback Jayden de Laura has thrown for 1,165 yards with 12 touchdowns to just two interceptions. He has completed 81 of 112 passes this season (72.3 percent) and also leads the team with 199 rushing yards.

"We gotta be real happy with him," Lee said of his senior signal-caller. "He's a veteran, he's been there from last year, he stays in the pocket but if it needs to he has that ability to run but still look downfield to see if anybody is open but can still use his feet to get some yardage so he's been doing a great job of that and it's a real threat for you defensively."

Attempting to slow down de Laura and company will be a Buffanblu defense that has held opponents scoreless in 21 of 24 quarters this season. They have posted four shut outs, including their last two contests: a 45-0 win over Long Beach Poly in California and a 42-0 rout of Waianae last Saturday.

"I'm impressed, they played some good teams and they did a great job defensively and you gotta be impressed with any time you can hold somebody scoreless," Lee said. "They're really active and they're doing a great job of coaching them up and the kids are really executing very, very well."

Punahou's defense is holding opponents to averages of just three points and 160.5 yards per game. Despite the fact that the unit lost four standout defenders who all now play Division-I college football (Maninoa Tufono and Kaulana Makaula at USC, Marist Liufau at Notre Dame and Trent Shiraki at Navy) to graduation, Ane said he anticipated his defense to continue playing at a high level.

"I'm not surprised because they really worked hard, they worked hard in offseason and conditioning, we constantly talked about preparation and keys and reads I think its our job as coaches to put kids in positions to be successful and that's what we try to do every week, so knowing their physical abilities and mental abilities is really huge in personnel and where they play," Ane said.

On the other side of the football, the Buffanblu have also been spurred by a youth movement, specifically at the quarterback position where freshman John-Keawe Sagapolutele has filled in admirably for UPenn-commit Hugh Brady, who suffered a season-ending torn ACL in a win over Farrington just two weeks into the schedule.

"I think it's amazing what he's done at this level," Ane said of Sagapolutele, who has completed 64 of 118 pass attempts (54.2 percent) for 947 yards with eight TDs against four INTs.

"It's the Open Division and he's playing against the best teams and the best personnel, so for him to step in and to be able to perform like this has been great to see and Hugh has been great about helping him with keys and reads, the o-line, the running backs and receivers have stepped up and it's been a group effort, but for John to step up and accept that responsibility is always great to see," Ane said.

Punahou is averaging 36.2 points and 318.3 yards of total offense per game. It has scored 40-or-more points four times this year, including each of its last three contests.

Lee has also taken notice of Sagapolutele's play and the Buffanblu production.

"I'm really impressed. For him being a youngster coming up and doing the things he's been doing, it seems like every game he's getting better and better and I just think give a lot of credit to him and what he's doing," Lee said. "He's showing that it doesn't matter what grade you are, it matters what you do and he's doing a great job."

Defensively, the Crusaders have gotten contributions from numerous players, but Lee singled out the play of 6-foot-2, 210-pound senior Darrell "Sonny" Masaniai, who moved from linebacker to defensive line this season.

"He's got a lot of ability and we're kind of stacked pretty much at the linebacker position so he made that change and it's really been a big help for us defensively. I think he has really picked it up now and we just like his energy and his passion for playing defense," Lee said.

Saint Louis has won 31 consecutive games heading into Friday's game against Punahou, which was the last team to beat the Crusaders.

The Buffanblu used a 16-point first quarter to jump out to a 23-0 halftime lead before holding on for a 33-20 win over Saint Louis on Sept. 29, 2016 at Aloha Stadium. Then-senior Tua Tagovailoa was held to a career-low 116 yards on 12-of-26 passing with no touchdowns and two interceptions.

The Crusaders survived a 35-28 scare when the teams met on Sept. 15 of last year. They recorded seven sacks, six of them in the first half, and overcame four interceptions by de Laura, two of them by Punahou safety Alakai Gilman, who finished with a game-high 12 tackles in the loss.

'Bows use 9-run seventh inning to pull away from Sharks

Hawaii Pacific held a brief one-run lead, but UH scored the final 12 runs of the game to overwhelm the...

Rainbow Wahine fall to No. 8 Huskies in season opener

Despite an 8-0 loss to her former team, there was no wiping the smile off of UH junior shortstop Nawai...

The 6-foot-1 freshman outside hitter, who earned All-Hawaii Third Team honors in 2018, has started all...

Rebels off to hot start, thanks in part to Capllonch, Oliveira