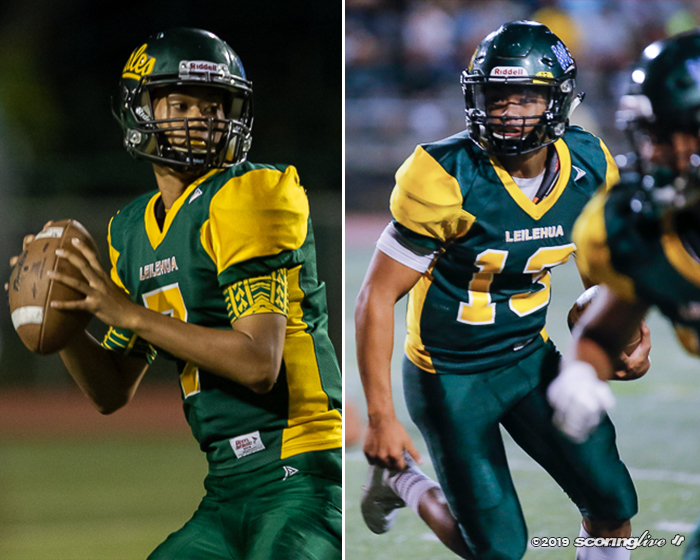 Led by quarterback Kekoa Turangan's 285 passing yards and four touchdowns, Leilehua posted 396 yards of total offense to upset the then-No. 8 Monarchs. Just one week prior — in Turangan's first start since taking over for Kalei Akagi — Kurisu's team racked up a season-high 459 yards in a 41-0 rout of Aiea.

Turangan, a 6-foot, 155-pound senior, served as the team's second-string quarterback a year ago and competed with Akagi, a junior and wide receiver by trade, for the starting job all offseason.

Akagi won out as the starter to begin the season and despite a 3-0 start to the year, the offense struggled to match the level of success reached by the defense, which posted shut outs in each of the Mules' first two games.

Leilehua's lone loss on the year came against Moanalua on Aug. 30. Although the Mules kept Na Menehune to just 223 yards of total offense — including minus-40 rushing yards — they managed just 282 themselves and were minus-three in the turnover battle as a result of four interceptions.

It was after the loss that the change was made to insert Turangan as the starting quarterback and move Akagi out to his natural position of wide receiver.

"We just said to each other that it's not just one person getting it all down, it's a team effort," Akagi said. "It's team work and you can't just blame it on one person, so we took a step back as an offense, we looked at what we had and we made adjustments and we just went off of them."

Turangan said there was never a moment that he got down on himself while backing up Akagi.

"I was happy for him. He's good and I'm just doing my part for the team," Turangan said.

Akagi was just as excited for Turangan when the latter got his opportunity as the starting signal-caller.

"He did amazing," Akagi said of Turangan's 20-of-25 passing performance against Damien Friday.

"His number was called a couple games ago and he stepped up to the plate and he did his job. I couldn't ask for a better quarterback," said Akagi, who had a team-high seven receptions for 105 yards against the Monarchs.

Akagi and Turangan hooked up for the game's first score with their 41-yard touchdown pass just past the midpoint of the first quarter Friday.

"Me and him have a great quarterback-receiver bond. I think that's the most important thing for me, is to have that connection with the quarterback and the timing," Akagi said. "We still have to practice, we invest a lot of time into catching a lot of passes after practice and just getting that connection down and it shows in the game that we have that good connection."

Manley praised Turangan for his perseverance and toughness.

"Our quarterback, Koa, his confidence is growing. He's getting all the reps at practice now and he's starting to build that relationship with his receivers and one thing I love about Koa is he just hangs in there," Manley said. "He just hangs in that pocket with the pressure, he's about to get lit up and he still makes the throw, so his confidence and he's just having a good time, so it's just good to see."

Kurisu acknowledged that the personnel changes have only worked because of Akagi's unselfishness and team-first attitude.

"That's the thing, as you bring one player in, there has to be another player who is humble enough to say, ‘Okay, I will relinquish that role,' but at the same time he brings something new to the table offensively," Kurisu said.

Manley used "something new" to answer Damien's 5-yard touchdown run by River Iaea in the third quarter when Akagi lined up alongside Turangan as the running back on Leilehua's very next play from scrimmage. Akagi took a simple toss from Turangan and went untouched down the left sideline for an 80-yard TD run that gave the Mules the lead for good.

"That was a momentum-changer, I guess. That 80-yard run got us going and just helped us," said Turangan, who also threw a pair of scoring strikes to Jayzon Ramos in the win — one in each half.

Manley credited both Turangan and Akagi for preparing and pushing one another.

"The thing about Kalei and Koa is they built a great relationship the whole offseason. Kalei was bouncing between quarterback and receiver since February. He was playing receiver for us in 7-on-7 and him and Koa had a good relationship then and Kalei just ended up getting his number called at the beginning of the year, but as soon as we made the change they were ready to go because they've been doing it for six months already," Manley said.

Kurisu said that while the situation may not have played out exactly how he envisioned it would, his team is better for having endured it.

"We've been trying to prep two quarterbacks and we knew each quarterback brought something different to the table," Kurisu said. "Koa trusted the process, he was patient for his turn and now that he has it, he knows his role as our starting quarterback and it's pretty incredible to watch how much he's done. You can't be more proud for a kid like that."

Leilehua, which moved up two spots to No. 11 in this week's ScoringLive/Hawaiian Electric Power Rankings, is averaging 27.8 points and 311.2 yards per game.

"Sometimes it gets rough when things don't work, but they've committed and been able to work together and they've grown so much offensively. Honestly, that's why we're looked different; that's why we've looked like Leilehua football," Kurisu said. "Our team, offensively, has brought lift to the whole package and we're just excited about where we're going."

But the work is far from done, Akagi cautioned.

"We still have work to do," he said. "I definitely think we're getting closer and closer as the weeks go by, so as we progress, as we progress and then we'll be at our peak."

The Mules (5-1 overall, 3-1 league) sit in second place in the Oahu Interscholastic Association Division I standings and will visit Castle Friday night.

Spartans, Warriors will square off for D1 state hoops crown

Maryknoll turned back Damien while Kamehameha rallied past Kahuku in Thursday's semifinals.

The Monarchs and Spartans will face off for a fourth time this season in Thursday's state semis.

Kahuku, Kamehameha win big to face off in semis

The Red Raiders pulled away from the Bears while the Warriors trampled the Mules in the night cap.