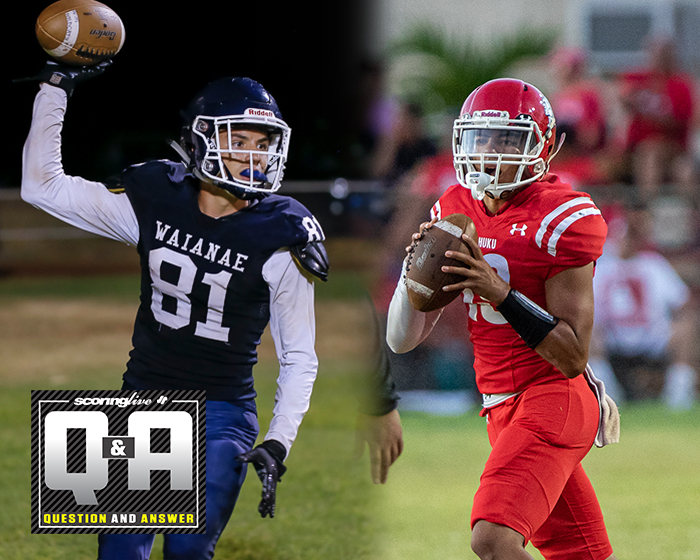 Delson Cordeiro and the Waianae Seariders make the trek up north to take on Tiger Adolpho and the Kahuku Red Raiders Saturday night. ScoringLive photo illustration

Both the Waianae and Kahuku football teams are looking to bounce back this weekend.

Waianae, which will be playing its first road game this year, is coming off of its bye week after a 28-20 loss to Kapolei on Aug. 9. Meanwhile, Kahuku is coming off of a 32-0 defeat at the hands of Mililani last Friday.

The Red Raiders were held to a meager 83 yards of total offense and were shut out for the first time since Sept. 9, 2017 against Bingham (Utah) in Las Vegas. It was their first time they were held scoreless by a Hawaii team since Aug. 15, 2008 in a non-league game against Kamehameha.

After last year's starter Robbie Sauvao transferred out late in the summer, sophomore Tiger Adolpho has taken over the quarterback job for Kahuku. He struggled, however, against the Trojans last week and completed just six of 18 passes for 61 yards.

Waianae also has a first-year starter at quarterback in Sheldon McLeod. The senior and Kapolei transfer has thrown for 429 yards with four TDs on 29-of-50 passing, but has been intercepted five times. Sophomore running back Alvin "Kolu" Quisquirin-Sabagala ranks second in the Open Division with 263 rushing yards on 31 carries (8.5 yards per attempt).

We caught up with the coaches of both teams — Waianae's first-year man Mike Fanoga and Kahuku second-year coach Sterling Carvalho — a few days before they face-off on the north shore this weekend.

ScoringLive: Describe your team's current situation in one word and explain.

Mike Fanoga, Waianae coach: "The word is hope. Right now, the way our league is going anybody can take this thing and our hope is to get to be one of those four teams for the playoffs. That's what we're aiming for. We just gotta take it one day at a time, but the word for me is hope."

Sterling Carvalho, Kahuku coach: "Motivated. We need to continue to get better and pay attention to detail."

What is the identity of this team, or has that been determined yet? If not, how is that process playing out thus far?

Fanoga: "The identity for our team is discipline. The word that I use is ‘DASH' — discipline, attitude, sacrifice and habits. Basically, I want them to understand that discipline is our number one priority, but to do that you gotta have the right attitude — not just on the football field, but in the classroom — and be a good citizen in the community. Sacrifice, their parents have sacrificed for them, we want them to sacrifice a few hours for their parents and make new habits instead of having old habits and we have to build new habits. Our brand is Waianae, but our identity is DASH."

Carvalho: "We need to get back to basic Kahuku football: play great defense and special teams, run the ball and control the clock."

What did your team able to gain from its one loss so far?

Fanoga: "Opportunity. They learned a lesson, it's a hard lesson to learn, but it's an opportunity to learn something. Now they see that they can compete with the top teams. This league is a great league and we're gonna face top teams every week. One of those teams was Kapolei, but we learned a great lesson from it, not just the players, but also the coaches — myself, too — but there's another opportunity out there for us now. Not just on the field, but in life, when one door closes, another opens. We're playing another great team this weekend in Kahuku and it's another opportunity for us to see if we can compete with them."

Carvalho: "We cannot make mistakes and need to be more disciplined. We need to be better in every aspect of our game."

Fanoga: "It's been great, they're very supportive and for me, being on campus helps, just being around the student-athletes especially. I want to install discipline, make sure they behave themselves on campus as students. So far the community has been great. I appreciate their support, I appreciate the people behind the community. I haven't heard any pots and pans yet, so it's been great. It's a great community; the people here work hard for what they do and what they stand for — just like Kahuku. I'm embracing it and everyone has been very supportive. The people here are great. Even though maybe I don't see them, they've been very supportive of the program, not just for me, but also the athletic department."

Carvalho: "Privileged. We have a great community that is passionate about their football and supports their players. To coach these great young men is a privilege."

What are your thoughts on this week's opponent and what it presents?

Fanoga: "Kahuku is just like us: they've had some ups and downs, but overall Kahuku is a good team with a good coaching staff and good players. They've won a lot of state championships and they're a very competitive team. They played and fought last week against Mililani, but the beautify of this Open league is that you will face tough teams every week. That's what I like and hopefully that's what the players like, to be competitive and hang with the big dogs. Kahuku is a good team, I like to watch them play. They will come out with smash mouth football — that's their identity — so they're gonna run the ball. They have a good coaching staff, they have a great community behind them and I know we're both hungry and trying to staying alive, so it's another opportunity to better ourselves and hopefully that opportunity will come out our way for our players."

Carvalho: "This is going to be a physical game. Kahuku and Waianae players are built from the same mold of tough island football. A new coach for Waianae brings new looks that we need to be prepared for."

What will be a key matchup within the game Saturday night?

Fanoga: "For us, we need to show up and play harder. Like I said, Kahuku is probably gonna run the ball — I know that's what they are and they're probably gonna stick to their guns and run right down our throat — so we just gotta hang in there and stick tough, show up and play harder. Our kids gotta understand that they're gonna run the ball and they've got some good guys in the backfield, plus they got a nice passing game, so we just gotta come out and be ready. Hopefully we can give a good show for the fans and just compete this coming weekend. Kahuku is a good team and we're looking forward to playing. I really respect that program and the great kids and families in that community."

Carvalho: "The players in the trenches. Whoever controls the line of scrimmage in this tough, physical game will have the advantage to walk away with the win."

Kahuku handily defeated Waianae when the teams last met, on Aug. 17, 2018 at Raymond Torii Field. It build a 16-0 lead by half time and got three defensive scores — including a couple of pick-6s — in the 49-13 win.

Kickoff between the Seariders and Red Raiders is scheduled for approximately 6:30 p.m. Saturday.