Press Pass
Much to build upon for Seariders, Marauders 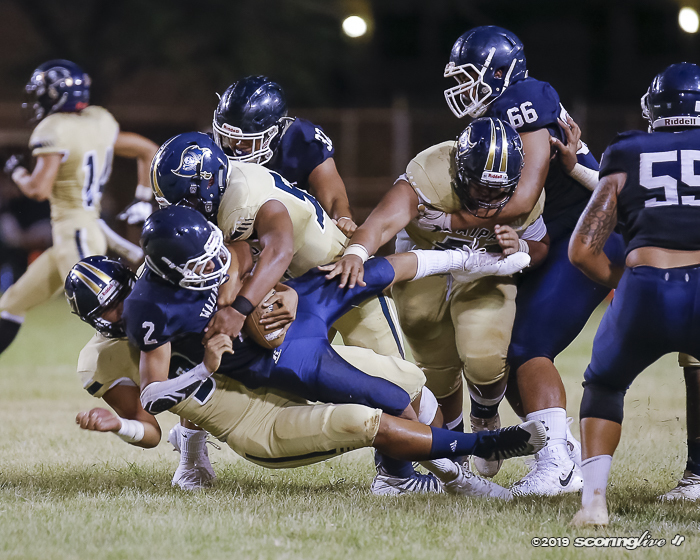 Waianae's Sheldon McLeod goes down in the backfield after getting tackled by a group of Marauders. CJ Caraang | SL 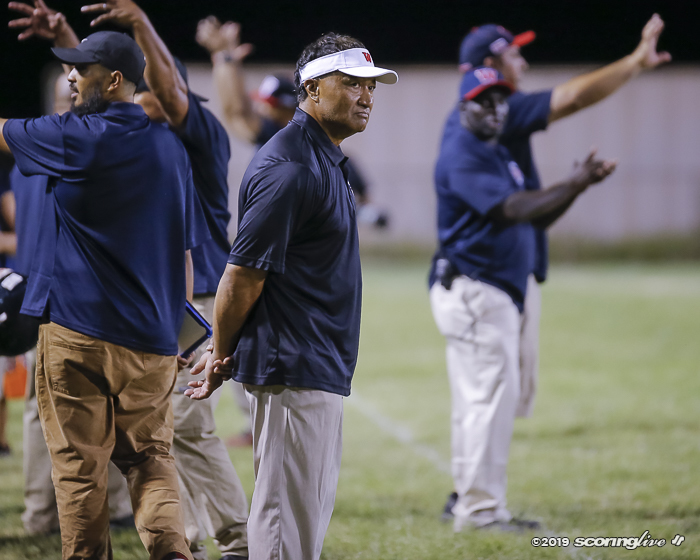 Regardless of the result, both coaches from Friday night's season opener between visiting Waipahu and host Waianae came away pleased with what they saw.

Let's start with the Seariders, who christened the Mike Fanoga era with a 35-20 win over the Marauders, last year's Division I state champion, and a team that defeated Waianae by 21 points to kick off the 2018 season.

"It feels great for the players that are here, especially the seniors — we've got 34 seniors — so now they've got a good taste of it and I told them before we came on the field, ‘we gotta win this for the seniors, they deserve this because they fought through the whole adversity last year,' and now that we got this W under our belt, now hopefully our season will take us where we need to go," Fanoga said.

Fanoga's squad built a 21-0 lead by the end of the first quarter, but saw Waipahu pull to within a point midway through the third period. However, Waianae went on to score the final 14 points of the game to pull away and secure the victory.

"We had a struggle putting up points in the second quarter, so we relied on the defense to hold them and they did a good job. Just a lot of great stuff that they did allowed us to come back and score and get that final 15-point lead," Seariders senior quarterback Sheldon McLeod said.

McLeod tossed a pair of touchdown passes in the first quarter and had 194 of his 230 total passing yards by halftime. In the second half, however, Waianae turned to its run game, which pounded out 204 of its 232 rushing yards after the break.

The Seariders may have found their next feature back in 5-foot-9, 210-pound Alvin Quisquirin-Sabagala. Conveniently enough for the rest of us, he goes by the nickname "Kolu," but its not just his surname that is a mouthful. The sophomore proved to be a handful for the Marauders defense as he averaged 9.3 yards per carry and scored on a 1-yard TD run on fourth down.

"Our running back is great," McLeod said. "He's got great movement, great power, great speed and our linemen are very aggressive blocking and big, so knowing that we can run out the clock in a situation like that and march down the field is very good."

Quisquirin-Sabagala's varsity debut was a good one, to be sure, but it was somewhat overshadowed by Waipahu's star running back Alfred Failauga. The senior and four-year starter ran for 237 yards and two TDs on 24 carries on his quest to become the state's all-time leading rusher.

"They're a very good team," Fanoga said of Waipahu. "They've got a great running back. Man, he gave us everything we could handle. That kid was something else. What an incredible talent."

While the result wasn't what he hoped for, Marauders fifth-year coach Bryson Carvalho said there was much to build upon following the loss.

"Big time. I mean, Waianae is a quality team, so the sky is the limit," Carvalho said. "For a long time we had our (starters) and then we had a really big drop off, but with this group we have a bunch of guys that can compete and can make plays on the field, so I was proud to see the backups step up and make big plays."

Neither team was at full strength last week, but Waipahu was without several key defenders, which led to three freshmen in the starting lineup Friday night.

"I like how our kids persevered when they found themselves down 21 points. We kind of found answers, we tested our character and even with a loss I like what I saw today out of our guys," Carvalho said. "Of course, if we punch it in a few times when we're in the red zone, (instead) of turning over the football, that's huge and it would be a different story, but that's the game. I mean, you win or you learn and I think we can get a lot of learning lessons tonight."

Both teams open the league portion of their schedule this Friday.

Waipahu, which fell four spots to No. 13 in this week's ScoringLive/Hawaiian Electric Power Rankings, will visit Castle in a rematch of last season's Oahu Interscholastic Association Division I final. Waianae improved two spots to No. 9 and will host seventh-ranked Kapolei at Raymond Torii Field.