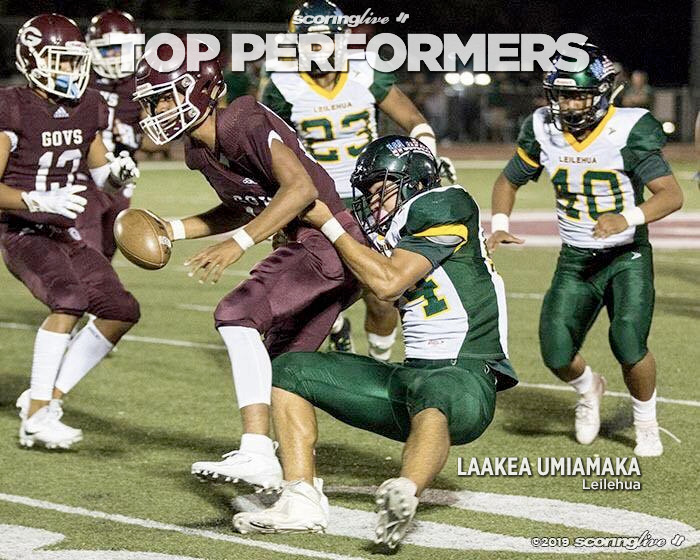 The sophomore defensive end had two TFLs, one sack, a forced fumble and a fumble recovery. ScoringLive photo illustration

Athlete of the Week: Laakea Umiamaka, Leilehua football
As far as varsity debuts go, Laakea Umiamaka's was a pretty good one and as far as season openers go, Leilehua's 35-0 win at Farrington Friday was about all that Mark Kurisu could hope for.

The Division-I Mules dominated both sides of the ball to shutout the Open-Division Governors on the first night of 2019 prep football season at Farrington's Edward ‘Skippa' Diaz Stadium at Kusunoki Field.

While the Leilehua offense posted 411 yards of total offense and five touchdowns — and most importantly, did not turn the ball over — its defense was just as stellar. Farrington was held to 270 yards offensively and held scoreless for the first time since Oct. 23, 2015, when it lost to Kahuku by a score of 43-0.

"Just as a whole, I think we're growing up," said Kurisu, the Mules' third-year coach. "I think that's the biggest thing. We graduated a bunch of guys last year and we've got a whole bunch of new guys coming in, but when your JV is successful you don't have to do so much basic stuff and you can do IQ stuff."

One of those varsity newcomers that played on last year's JV championship team is Umiamaka, a 6-foot-1, 215-pound sophomore defensive end.

Umiamaka recorded a pair of tackles for losses, including one sack, forced a fumble and recovered a fumble in his very first varsity game Friday.

"He is a talented young man. He's got a great motor and he's got length, so D-end is what fits best for him right now, but he could play linebacker if he wanted," Kurisu said.

Umiamaka's impact was felt by the Govs early on. On their second play from scrimmage, Umiamaka dropped running back Raymond Millare for a 2-yard loss to force a third down. The drive eventually came to a halt when Farrington turned it over on downs.

The Mules went up two scores after Chase Akagi's 5-yard touchdown run early in the second quarter. After the Govs got the ball back, Umiamaka sacked quarterback Darrius Chaffin for a 2-yard loss. Later in the drive — with the Farrington offense all the way down to the Mules' 31-yard line — Umiamaka pounced on a loose football when his teammate, Cy Acohido, recorded a strip-sack of Chaffin.

"Farrington was marching and they had a good drive going against us, so we just tried to do some movement up front — we were we were gonna have some quickness and speed advantage there — so we had some guys slanted in the right direction and from there the ball just came out by attacking and Laakea was able to get the football for us, which allowed us to change the momentum in our favor," said Kurisu, who serves as defensive coordinator.

On the very next play, quarterback Kalei Akagi hit Jonathan Vasquez for a 64-yard TD pass to stretch the Leilehua lead to 21-0 midway through the second quarter.

Leilehua's lead grew to 28-0 by halftime. Farrington started with possession to open the second half, but Umiamaka and the defense got another takeaway when the sophomore forced a fumble by Tony Paleafei on fourth down and Jaku Hanohano-Baptista recovered at the Mules' 35-yard line.

Kurisu's defense posted six tackles for losses in all, including three sacks, and three fumble recoveries.

Farrington was 0 for 4 on fourth-down conversion attempts.

Kurisu praised Umiamaka for his work ethic and professionalism, despite his youth.

"He listens. It's hard for someone at a young age to be pulled up to the varsity, get told that ‘you're starting,' and to be grounded enough to know that ‘I'm not the man,' and be willing to learn," Kurisu said. "What we love about him is he's a ‘Yes-coach, no-coach' type of guy. He just puts his head down and grinds. If he makes a mistake he will hold himself accountable, but at the same time he will pick himself up and adjust."

Umiamaka, who also plays baseball, will benefit from playing on the opposite edge of the defensive line from 6-foot-1, 235-pound junior Kiaka Pio.

"Kiaka has seen it more because he had a year of experience and he performed at a high level last year, so to have him on the opposite side just makes it easier for Laakea to do what he can do on the other end. It definitely just makes Laakea play faster when he has Kiaka opposite of him," Kurisu said.

Kurisu — who noted a strong mauka-to-makai wind at Diaz Stadium Friday night — said the win was nice, to be sure, but how his team executed within the victory was even more satisfying.

"We know Farrington had a bunch of guys that were unable to play, but even those conditions are their field was kind of rough, so to see how our players were able to go to an opponent's home field and go through those type of conditions but not get caught in the moment — because at times it was so windy that our guys couldn't hear the call — so it was good to work through that type of adversity and kind of trust each other more," Kurisu said.

Leilehua (1-0) is ranked 14th in this week's ScoringLive/Hawaiian Electric Power Rankings. It will host Kailua (0-1) Saturday in the Oahu Interscholastic Association Division I opener for both teams. Kickoff at Hugh Yoshida Stadium is scheduled for approximately 6:30 p.m.

FOOTBALL
Cy Acohido, Leilehua — Had one sack and forced a fumble in a win over Farrington

Kalei Akagi, Leilehua — Passed for 209 yards with a touchdown and ran in another score in a win over Farrington

Noa Bailey, Kapolei — Passed for 306 yards and three touchdowns and ran for another score in a win over Castle

Hugh Brady, Punahou — Passed for 283 yards and five touchdowns in a win over Kailua

Cole Cadinha, Kaiser — Scored on a 52-yard fumble return and had one sack in a win over Aiea

Zyan Caravalho, Kohala — Had two sacks in a loss to Kalani

Joseph Chin, Kaiser — Had two sacks and forced a fumble in a win over Aiea

Jonah Chong, Iolani — Passed for 212 yards with three touchdowns and ran in another score in a win over Kamehameha-Hawaii

Sedric Crawford, Nanakuli — Passed for 255 yards with five touchdowns and rushed for another 75 yards in a win over Molokai

Moku Dancil-Evans, Punahou — Caught three passes for 99 yards and two touchdowns in a win over Kailua

Ethan Domen, Kaiser — Scored on an 8-yard blocked punt return and on a 100-yard interception return in a win over Aiea

Alfred Failauga, Waipahu — Rushed 24 times for 237 yards and two touchdowns in a loss to Waianae

Journey Feliciano, Kapolei — Scored on a 20-yard fumble return in a win over Castle

Dahlus Hood, Kauai — Had four sacks and forced a fumble in a win over Kalaheo

Jake Holtz, Damien — Passed for 224 yards with three touchdowns and rushed 16 times for 71 yards and another score in a win over Lahainaluna

Trey Hunter, Kekaulike — Scored on a 59-yard punt return in a win over McKinley

Kila Kaio, Castle — Passed for 169 yards and three touchdowns in a loss to Kapolei

Wakea Kanahele, Kalani — Scored on a 12-yard blocked punt return in a win over Kohala

Rayden Kiaaina-Caires, Punahou — Caught two passes for 102 yards and a touchdown in a win over Kailua

Jake Lee, Kalani — Caught a touchdown pass and rushed for another score in a win over Kohala

Cavin Lime, Kaiser — Had three sacks in a win over Aiea

Randy McCabe, Nanakuli — Made seven tackles, three for losses, including one sack, and recovered a fumble in a win over Molokai

Franco Melgar Martich, Kekaulike — Threw a touchdown pass, ran in another and kicked a 24-yard field goal in a win over McKinley

Makanalea Meyer, Damien — Caught eight passes for 125 yards and a touchdown in a win over Lahainaluna

Kamu Peahu, Kauai — Rushed 15 times for 100 yards in a win over Kalaheo

Alvin Quisquirin-Sabagala, Waianae — Rushed 16 times for 148 yards and a touchdown in a win over Waipahu

Trey Rickard, Lahainaluna — Rushed for a touchdown and intercepted a pass in a loss to Damien

Nicholas Sakamoto, Kalani — Had one sack, forced a fumble and scored on a 20-yard interception return in a win over Kohala

Jacob Saole Sua, Kapolei — Scored on a 26-yard interception return in a win over Castle

De'Zhaun Stribling, Kapolei — Caught 10 passes for 134 yards and two touchdowns in a win over Castle

Amo Sulu, Damien — Rushed for a touchdown and caught a TD pass in a win over Lahainaluna

Brannon Tanaka, Kaiser — Had three sacks in a win over Aiea

Vincent Terrell, Punahou — Caught a touchdown pass and also scored on a 95-yard kickoff return in a win over Kailua

Joshua Tihada, Lahainaluna — Rushed 20 times for 148 yards and two touchdowns in a loss to Damien

Jonathan Vasquez, Leilehua — Caught four passes for 116 yards and a touchdown in a win over Farrington

Noe Vega, Kalaheo — Had one sack and recovered a fumble in a loss to Kauai