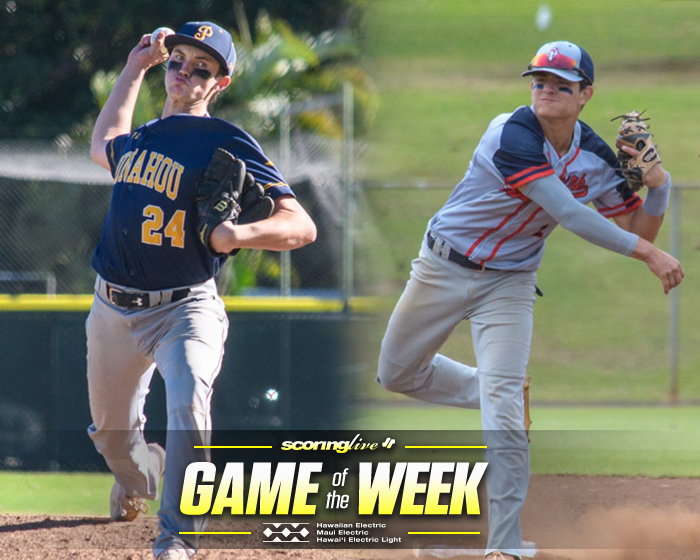 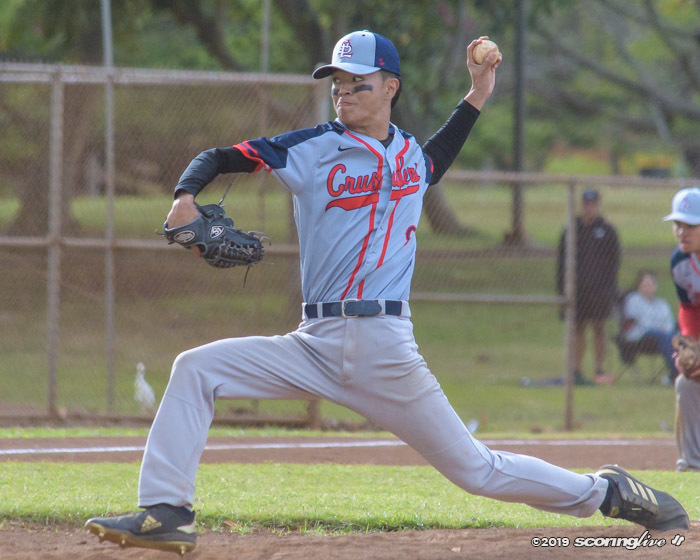 Saint Louis' Makaio Bruchal is a potential starter on the mound against the Buffanblu. Spencer Honda | SL

The Punahou baseball team knows what's at stake when it takes on Saint Louis this weekend.

But that doesn't mean that the Buffanblu are changing their approach.

No. 3 Punahou can earn the honor of being the first team to clinch a state tournament berth this season with a win over the fourth-ranked Crusaders when the two teams square off Saturday at Central Oahu Regional Park. First pitch is slated for noon.

The Buffanblu, who is the highest-ranked team on Oahu in this week's Hawaiian Electric Baseball Power Rankings, currently sit atop the ILH Division I standings with a 12-1 record. With two games left in Punahou's league first-round schedule and Saint Louis entrenched in second-place with a 11-3 record, the Buffanblu are in control of their destiny.

Punahou coach Keenan Sue said the coaches and players know the scenario, but they are doing their best to stay focused and present.

"That's the scenario, but I think part of the reason for our success thus far this year is we're not even thinking about tomorrow. ‘How do we have the best practice today,'" Sue said Friday morning.

"The theme for this year is ‘win the day.' If it's practice, let's have the best practice that we can."

Sue said the players have responded well to this mantra.

"Really proud of the players for working so hard for each other. They conduced themselves with honor and integrity and we are super proud of them," said Sue. "Great bunch of guys, we've all learned a lot together. They've taught us just as much as we've hoped to pass on to them."

The two teams last met on March 12 at Mike Goeas Field. Saint Louis led 2-1 after the second inning, and 3-1 after the top of the fifth, but Punahou tallied four runs in the bottom of the frame to win, 5-3.

It's been a while since Saint Louis coach George Gusman saw the Buffanblu, but he has been impressed with what they have accomplished so far this season.

"That seems like years ago (the first time we played), because it was early in the season. I cannot remember seeing them, it's been so long, but they've been playing really well. To be in this juncture in the season with only one loss is fantastic for them," said Gusman.

Saint Louis' Makaio Bruchal is a potential starter on the mound against the Buffanblu. Spencer Honda | SL    Purchase image

Gusman said the Crusaders will probably start a left-handed pitcher against Punahou on Saturday to combat a Buffanblu lineup with multiple left-handed batters. Junior pitchers Makaia Bruchal (3.44 ERA, 1-0) and Randen Kohagura are the potential starting pitchers against Punahou.

When asked about which Punahou hitters his team has to watch out for, Gusman gave another sound bite.

"Holy mackerel, they have…sheesh, and the thing that's scary is they're young. It's been pick your poison."

Left-handed batters in Punahou's batting order include leadoff hitter Kalae Harrison (.349 average, 13 runs) and three-hole hitter Jake Tsukada, who leads the team in runs scored and RBIs with 18 and 19 respectively. Tsukada also hit a walk-off home run in a 10-inning win over Iolani to avenge the Buffanblu's lone loss of the season.

BASE: No. 4 Punahou outlasts No. 3 Iolani, 5-4, in extra innings https://t.co/vAzhX4VMaL pic.twitter.com/OKVZwhuRi0

Other batters that bat left for the Buffanblu are Koa Eldredge (.371 average) and designated hitter Kade Morihara (.433 average).

For the Buffanblu, 6-foot-1 senior Matt McConnell (21 innings pitched, 2.68 ERA, 3-1) will get the start on the mound against the Crusaders.

Sue expects a "dog fight" against Saint Louis this weekend.

"They're tough. Obviously they had a great year, always physically gifted and they can do damage at the plate at will. Coach (Gusman) does a great job, routine defense, and they execute.

"It's going to be fun, the reason why everybody practices and trains hard is so you can have a chance to compete in a game that means something to the kids. I'm looking forward to it. Saint Louis is going to be pumped. I think whoever can keep their wits about them, throw strikes and play defense is going to win."

"For us on the mound, we need to throw strikes. It sounds pretty simple, but easier said than done…and take care of the ball. If we can do that, hopefully we can put the ball in play and create some things and keep it close and get a little lucky, and we can steal one, that would be fantastic," said Gusman.

The seniors were paramount in wins for the Kailua boys' and HBA girls' hoops teams.