Press Pass
'It's kind of a passing of the torch' 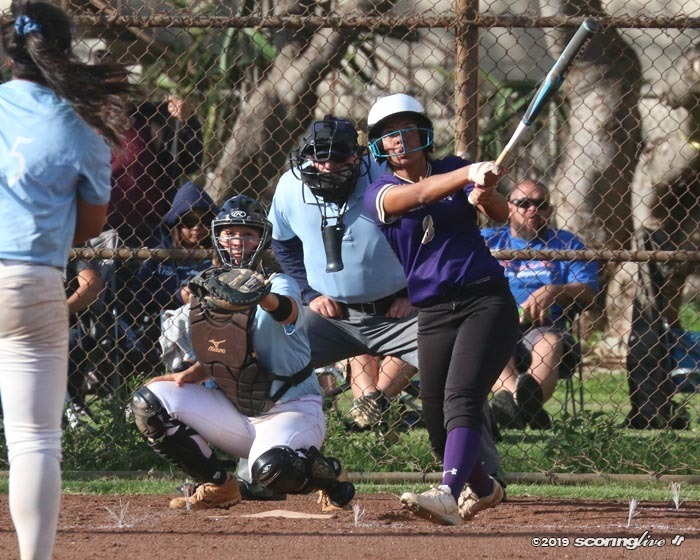 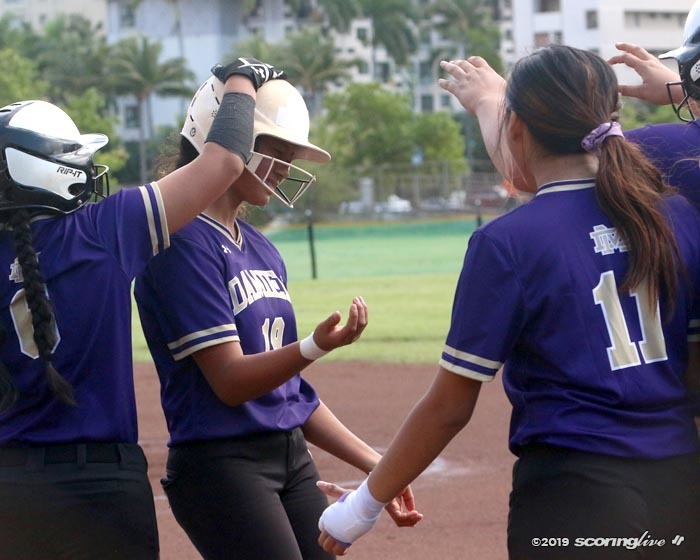 Rylee Gaudia and Sherreigh Nakoa-Chung are both in the midst of their freshman season of softball this spring. That's about where the similarities end, however.

For the Monarchs — who are in their first varsity season of softball — it was just their second game in program history; Another baby step in the beginning of their journey, if you will. But for the Saints — coming off their first Division II state championship last season — the game marked the beginning of the end with the 95-year old school set to close its doors in June.

The game itself was a one-sided one, with Saint Francis pulling away with an 11-1 win. Shaylann Grace's solo home run to lead off the bottom of the fifth inning brought an end to the contest due to the mercy rule, but it was Damien who opened the game with some fireworks in the form of Gaudia's homer to lead off the game.

"It felt pretty good," said Gaudia, who started at catcher Wednesday. "For the (regular) season that was our first home run. Our pitcher, Gloriana (Sua), she hit another home run, but it was just in a preseason tournament so it kind of felt good to hit the first season home run."

Damien coach Eddie Kealoha said Gaudia's blast over the left field fence was the perfect start for his young team.

"Yeah, that was very exciting for us. It just gets everybody going and we'd like to get more hits, rather than home runs, but we're coming along," Kealoha said.

Kealoha is certainly familiar with the Saint Francis program. He, along with assistants Derrick Higa and Kai Ah Yat, were formerly coaches there under Randy Langsi.

"Those are three coaches that were on my staff for five, six years," said Langsi, who is in his 10th season as head coach of the Saints. "Eddie's been here for a long time. It's a class group of guys and I know Eddie will bring character and integrity to the (Damien) program and his knowledge of the game."

Kealoha paid homage to Langsi with his postgame comments Wednesday.

"I've got much respect for coach Randy and his staff and those girls. I've been with those girls since they were in intermediate and I respect him so much," Kealoha said.

Through its first three games this season, Damien has been outscored by a combined 68 to 2, but there is reason to be optimistic with a roster that is entirely comprised of underclassmen. Furthermore, just a handful of the 17 girls have softball experience prior to this season.

"Most of us are beginners so it's kind of hard, so we're just going on our own path together and we'll see what comes along with it," said Gaudia, who has been playing softball for more than eight years.

As one of the few with experience in the sport, Gaudia has been put in a position of leadership — as evidenced by her spot atop the lineup and behind the plate.

"Coach (Kealoha) always says, ‘Hey Rylee, you know, you're the most experienced girl, you gotta help these girls out, pick them up,' so they always look for me and that makes me feel good because I'm still a freshman — I'm probably the young one on the team — but I like that they look to me," Gaudia said.

Part of that job entails keeping the spirits of her teammates up when the going gets tough.

"When our heads are down, I just always think about, ‘Don't worry about it, we'll just get ‘em back the next time,' because this is only our first year and people expect us to probably be not so good and so when we're down, I just think about how, ‘Oh, you know after the game we're just gonna eat,' something to bring them up, keep them up, get the three outs and then let's go, so that's all I look forward to after," Gaudia said.

Kealoha knows progress will take time and that his players are being thrown into the fire that is ILH softball.

"We're getting better. With a little bit more work, we're in great position, we just gotta keep learning how to catch the ball, throwing the ball, so we're getting there. We just gotta keep working," Kealoha said. "Being that only six girls have played and the rest of them have never played, so it's a process and if they believe in it and we keep working, it'll be alright. We'll get better each time. The more we play, I believe we'll get much better."

Langsi is certainly empathetic to the situation that Kealoha and the Monarchs face this season. At least one Saint Francis coach was seen offering some pointers to a Damien player after the post-game handshakes.

"I understand it, for sure. It's going to take a lot of building and I understand what they're going through and I mean, their time is going to come. They're going to be probably replacing us as far as being real competitive real soon; I wouldn't be surprised if it's next year. It's kind of a passing of the torch. In fact, there might be a few of our girls that are heading that way," Langsi said.

In addition to the prospect of defending their state title on the diamond this season, the Saints' underclassmen are having to figure out where they will attend school next year and beyond.

"We're just taking it one day at a time," said Nakoa-Chung, who started at third base Wednesday before finishing out in the pitching circle. "It's a little sad for our players because they've been playing at our school for a long time and each day we're just playing as it's our last and we're just pouring our hearts out at practice and in games every day."

Nakoa-Chung is in her first season at the Manoa private school after transferring from Ka Waihona O Ka Naauao Public Charter School in her hometown of Nanakuli. She said she is still weighing her options.

"Right now I'm trying out for a lot of schools and I'm just waiting on the schools that I'm getting accepted to and it comes down to the money and it depends on what my family can afford and what I choose to go to," said Nakoa-Chung, whose older sister Shazzareigh played on PAC-5's state championship-winning team in 2016.

Both Nakoa-Chung and Langsi said the initial news of the planned closure sent shock waves through the student body and alumni.

"It's unfortunate," Langsi said. "I mean, it's sad given the history of the school and everything, (but) I'm trying to get my girls to look forward. There's nothing we can do about it at this point, so we just hope to play every day like it's our last."

While Gaudia — who previously had to suit up for PAC-5 at the intermediate level — and the Monarchs finally have a program to call their own, the Saints know their days are numbered.