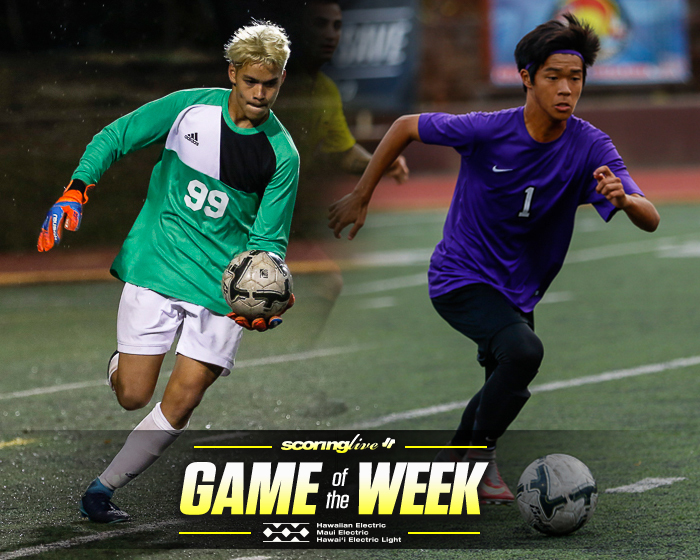 Through two-plus weeks of the Oahu Interscholastic Association boys soccer season, three teams remain undefeated in the Western Division. Two of them will face off Friday night.

Kapolei, Pearl City and Mililani — the usual suspects — sit within one-half game of each other atop the standings entering the weekend. The Trojans (3-0) will host the Chargers (4-0) Friday at John Kauinana Stadium before a road test against the Hurricanes (4-0) Tuesday.

It's hardly an unfamiliar situation for Mililani coach Steve McGehee.

"It's an interesting run up for us, but our schedule has never changed — it's been that way for the last four or five years where we play Pearl City and then Kapolei — so you hit the strength of your schedule before the New Year and it makes it so that you gotta prepare for those games and then you can learn to play soccer after that," McGehee said.

Friday's game will be the first against a Division I opponent for the Trojans, whose first three results were each blowout wins over Aiea (10-0), Waialua (9-0) and Nanakuli (11-0).

"I've said it in years before that we just gotta prepare to survive somehow and then we'll learn how to play soccer after that. I know Pearl City is always gonna be a tough team, Kapolei is always good, Campbell looks like they're tough and Radford looks like they'll cause problems, so it's going to be interesting," McGehee said.

Last season, Mililani finished third in the OIA tournament and reached the quarterfinal round of the state tournament. It finished with a 12-3-1 record that included a 1-0 win over Pearl City in the regular season.

While the Trojans lost only five players to graduation in the spring, among them were Dane Little, an honorable mention All-Hawaii forward, and third team midfielder Trystan Wright, who scored the goal in the win over the Chargers last December.

"Trystan was our biggest one we lost; He was our captain last year and Dane Little is another loss for us with his production up top," McGehee said. "It was a very young group in that sense with just five seniors, but that's where, I think, our strength is. We're replacing those two guys — the other three guys were not significant impact players — so most of our guys were freshmen, sophomores and juniors last year and now they're sophomores, juniors and seniors."

McGehee expects a solid season from junior Nicholas Gaston, who returns for his second season starting in goal, as well as junior midfielders Jvon Cunningham and Liam McGehee.

"We're going to lean upon them a lot and then it helps to have 11 seniors," McGehee said.

Among the senior class are forward Noah Ungos and Ayden Lawes, as well as defender Kekoa Kuloloia. The trio, in addition to Cunningham and Gaston, picked up All-Hawaii honorable mention last season.

"It's a group that has potential. If they can start figuring out the small things, get a little lucky here and there, they can go a long way," McGehee said. "It's a new group, new year, so it's always fun trying to put the pieces together, (but) it's still a work in progress definitely."

The Chargers are also working out the kinks with a largely new group after losing All-OIA first teamers Devan Yoshimura, Nikita Richey and Justice Gomes, as well as second teamer Zameer Khan, to graduation.

"We're obviously not going to replace those players, but we're definitely going to adapt and play to our strengths more. We don't have to rely on one (guy). I think last year we relied on certain players, but I think this year it's really who has a hot hand, that kind of thing," said Pearl City coach Derek Kawano, whose team is coming off a 10-4-1 record, fifth-place finish in the OIA tournament and a first-round exit at states last February.

Kawano said the preseason was a productive one for his squad, most notably tournaments hosted by Kaiser and Hawaii Prep.

"We played a couple other teams here and there, but mostly those two weeks gave us some tough games where we learned a lot about ourselves. We learned a lot about what our strengths are, what our weaknesses are and we learned how much potential this team has and really, I think that's what this year is all about," Kawano said. "If this team can realize their potential — I know it sounds pretty cliche — but I think we'll do pretty good, despite what we lost and what others thoughts."

While the Chargers will be working in a slew of new players this season, Kawano refuses to call it a rebuilding campaign.

"I don't like to say that because I don't think we are. With the talent we lost last year — everyone knew them and everyone knew their talent level — I think a lot of people assume that we're in a rebuilding year just because of how prolific last year's class was for us, but I have high hopes for this team this season," Kawano said. "We may have lost a lot of starters, but these guys that are playing now were getting significant minutes. I do feel like we're a deeper team than last year, but I still think we're definitely trying to find the right combination and trying to optimize things, like any team is doing as well, but I feel like we're definitely learning and we're definitely getting better."

Like Mililani, Pearl City also has a returning starter in goal in senior Richard Seaman. Kawano also said he expects the midfield to be a strength this season and expects big seasons out of seniors Zeth Bolosan, a second team All-OIA West selection last year, and junior Kainoa Wong.

"There's a lot of experience that returns in our midfield. Zeth Bolosan is one of our captains, one of our leaders for us this year, so he definitely steps into a bigger role, but he's been playing and a starter for us since his sophomore year and Kainoa Wong has been on the varsity team since his freshman year, so he's definitely looking at a more expanded role as well," Kawano said.

Pearl City opened the season with a 2-0 win at Waipahu and a 1-0 victory over Radford, followed by a 10-1 rout of Aiea. It defeated Waialua by forfeit Tuesday night.

"Any Mililani team is going to be strong when they have strong returners and they were already decent last year, so I'm expecting a very tough game. I think it will be a lot harder to play this year's team being that they're so old and got so many returners. If we thought last year's game was tough, I expect a similar game this year," Kawano said.

Kickoff between the Chargers and Trojans is scheduled for 7 p.m. at Kauinana Stadium Friday.

SL reporter Kalani Takase touches upon a few players to keep an eye on during the 2020 football season.