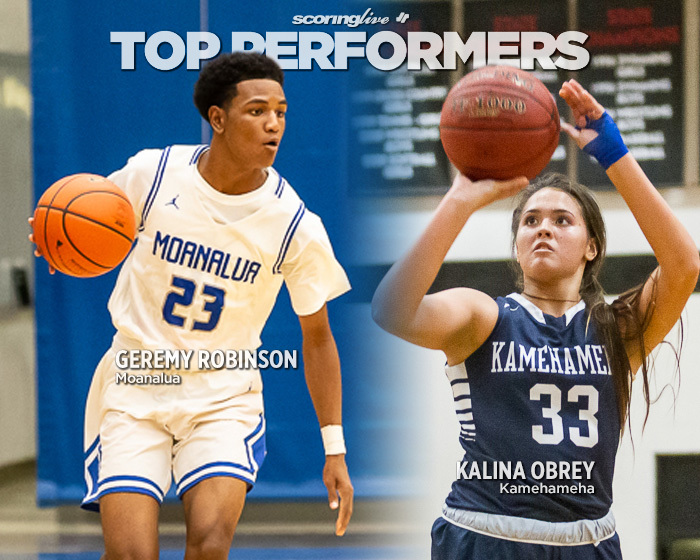 Robinson, a 6-foot-1 sophomore guard, made that clear at last week's OIA-ILH Challenge, where he averaged 26 points in three games, including a season-high 29-point effort against Iolani Saturday.

"I thought he did a terrific job. If there were an all-tournament team, he would definitely be on it," Mello said. "He's obviously a guy that we need to score for us and in addition to scoring for us, I like the way that he's distributing the ball and getting others involved. He's doing a lot of things for us and we need him to do that."

In each game over the weekend, Robinson increased his point production. He opened the tournament with 23 points in a 65-61 loss to Saint Francis Thursday before netting 26 points Friday in a 71-48 win over Kamehameha.

Mello said the victory over the Warriors was a big one for his program.

"We beat Kamehameha for the first time in a long time," He said. "If we could have defended the 3-point line and made our free throws, I think we could have been right there with Iolani. We're finding ourselves and I think we're getting better against the ILH teams. For us to get where we need to go, we need to beat the ILH teams. Yes, it's the preseason, but we gotta do it at the end of the season, in the state tournament."

Moanalua is coming off a 10-8 record and a fourth-place finish in the state tournament last season. Robinson, then a freshman, was selected to All-OIA Eastern Division Third Team and received All-Hawaii Honorable Mention distinction.

Mello said the big difference with Robinson this season is his strength.

"He's probably put on about five to 10 pounds this year, but he did not have the same type of strength last year that he does this year. I think part of it was growing into his body, but he spends a lot of time improving his game. He puts in the time to get better. He also plays against men — he plays in men's leagues — so he's playing against guys that are bigger and stronger than him and he's adapted nicely," Mello said.

Robinson is averaging 20.1 points per game this preseason. He has made seven 3-pointers and is shooting 72.7 percent from the free-throw line.

"He's solid in all aspects of his offensive game. In other words, he can shoot the 3, he's terrific in transition, he's got great instincts so he can finish at the rim and he's very good at finding open teammates and I just think his game is coming together so nicely. He's becoming a complete offensive player," Mello said.

Mello has no doubt in his mind that Robinson, whose father played at the University of Hawaii, can compete at the Division I level collegiately.

"Geremy has big goals for himself. He wants to play college basketball and I think he actually wants to go beyond that," Mello said. "What pleases me is the team is important to him and he gets other guys involved. I think he enjoys making his teammates better as well, that's something that really pleases me."

Mello drew a comparison to a former Punahou and University of Hawaii guard Miah Ostrowski, a four-time All-State player for the Buffanblu.

"I coached Miah at Punahou and Geremy kind of reminds me of him a little bit because he's got great instincts and vision. I think he's starting to understand that more, that not only can he score, but he can distribute and find his guys. Some of the guys that he finds, I'm like ‘wow, how did he see that?' "

Robinson and Na Menehune (4-3) will take part in the Iolani Classic next week. They open against Pleasant Grove (Utah) next Wednesday at 5 p.m.

Female Athlete of the Week: Kalina Obrey, Kamehameha basketball
When Pua Straight was named as the Kamehameha girls basketball coach in late May, she knew that Kalina Obrey would be someone she had to rely on.

Obrey, a 5-foot-11 senior forward and fourth-year starter on the varsity squad, as responded nicely so far this season. The San Jose State-signee is averaging 16.1 points per game this season and turned in two more double-digit performances in wins over Mid-Pacific and previously-unbeaten Iolani to open the Interscholastic League of Honolulu season last week.

In Wednesday's 55-33 win over Mid-Pacific, Obrey poured in 18 points, including an 8-of-9 effort at the free-throw line. Two days later, she netted a game-high 16 points to help the Warriors pull out a 49-45 road win over the Raiders.

"She's awesome," Straight said. "I think the thing that makes her special is her mentality. She goes into every game knowing she's going to dominate and that's just what she does. In our first two ILH games she's averaging a double-double, even in the preseason she was racking up double-doubles, so she can do it all."

Straight, a 2009 graduate of the Kapalama campus, previously served as JV head coach before taking over the varsity job.

"I never got a chance to coach Kalina because she went straight up to varsity, but I watched her a lot and the thing that I think is most impressive about Kalina that I learned coaching her since this summer is the leadership that she has. She makes people around her better. There are a lot of players out there who are good on their own, but very seldom do you see a player that makes their team better," Straight said.

Last season Obrey, who is also a middle hitter on the Warriors' volleyball team during the fall season, earned first team All-ILH honors and second team All-Hawaii recognition on the basketball court.

"I knew that if we were gonna be successful this year, Kalina was going to have to kind of step up and be the leader on the court, which she has," said Straight, a health and physical education teacher at Kamehameha.

Straight recalled a conversation she had with Obrey shortly after she was hired.

"She has that mentality in practices and games. Her confidence is pretty unwavering from what I've seen and that goes along with that mentality of always wanting to dominate, but she can also get the girls around her going and she does a really good job of making everybody feel important to the team," Straight said.

In addition to her work in the post, Obrey has deepened her repertoire in preparation for the next level.

"She's worked really hard to improve her perimeter skill set this summer," Straight said. "Most people saw her as a post-up, back-to-the-basket player — and she's really good at that. She started as a true post player, but she's worked a lot on her perimeter game and her face-up game, so she kind of has the ability to do it all. She can shoot, we saw in the Iolani game she can drive to the basket, she also has really high basketball IQ and really good vision of the court as well, so her game has definitely evolved. I think part of that is she knows she's not gonna play center at college, so it's definitely paid off."

Straight said that while the victory over the Raiders was a big one — Kamehameha currently sits atop the ILH Division I standings as the lone remaining unbeaten — it's still "just two wins and it's a long season and a tough league where anyone can beat anyone.

"Even though it's a good start to the season, I think we just gotta continue. The win was huge for us and the girls were really excited to play that game, but we don't want to get big-headed," Straight said.

Obrey and the Warriors (2-0) continue league play this week with home games against Maryknoll Wednesday and Punahou Saturday.

Hayden Bayudan, Damien — Scored 22 points in a win over Kapolei

Duke Clemens, Punahou — Scored 19 points in a win over Kalaheo

Mario Drummer, Kaiser — Scored 19 points in a win over Aiea

Les Falatea, Punahou — Scored 19 points in a win over Kailua

Frank Felix, Iolani — Scored 18 points, including four 3-pointers, in a win over Moanalua

Isaiah Hopson, Kailua — Scored 25 points in a win over Kamehameha and scored 18 points in a loss to Iolani

Jem Kouch, Farrington — Scored 20 points in a loss to Leilehua

Logan Lasell, Leilehua — Scored 26 points, including four 3-pointers, in a win over Farrington

Kaulana Makaula, Punahou — Scored 20 points in a win over Kalaheo

Ryan Pardini, Kalaheo — Scored 24 points, including five 3-pointers, in a loss to Punahou

Derek Payne, Island Pacific — Scored 22 points in a loss to Assets and scored 21 points, including four 3-pointers, in a win over Christian Academy

Wade Pimsaguan, Waimea — Scored 19 points in a win over Radford

Lydell Romero, Kailua — Scored 22 points in a loss to Iolani

Cyrus Singelman, Kaiser — Scored 24 points in a win over Aiea

Robert Thompson, Kalaheo — Scored 15 points with 11 rebounds in a loss to Iolani

Everett Torres-Kahapea, Kailua — Scored 22 points in a win over Kamehameha and scored 21 points in a loss to Punahou

Sam Wheeler, Iolani — Scored 22 points, including four 3-pointers, in a win over Kailua

Nathaniel Whitehurst, Kapolei — Scored 18 points in a loss to Damien

Kaelyn Espinda, Kaimuki — Scored 21 points, including four 3-pointers, in a win over Kailua

Kalena Halunajan, Kalani — Scored 17 points in a win over Kalaheo

Fua Fonoti, Nanakuli — Scored 16 points in a loss to Leilehua

Kamalu Kamakawiwoole, Kalani — Scored 19 points in a win over Kalaheo

Kaylen Kamelamela, Leilehua — Scored 21 points in a win over Waialua

Caiyle Kaupu, Konawaena — Scored 20 points in a win over Kohala

Analisa Liotta, Kapolei — Scored 23 points in a win over Aiea

Jayla Medeiros, Konawaena — Scored 17 points in a win over Kohala

Cerina Noh, McKinley — Scored 21 points in a win over Kailua

Sonia Palik, Kaimuki — Scored 17 points in a win over Kailua

Dahlis Sablay, Mililani — Scored 17 points in a win over Nanakuli

Tia Sofa, Roosevelt — Scored 16 points with 10 rebounds in a win over Farrington

Jalen Tanuvasa, Maryknoll — Scored 16 points in a loss to Iolani

Taylor Tateyama, Roosevelt — Scored 19 points in a win over Farrington

Hadassah Tuiolemotu, Kapolei — Scored 16 points in a win over Aiea

Images from scrimmages from McKinley, Saint Louis, Iolani and Punahou.