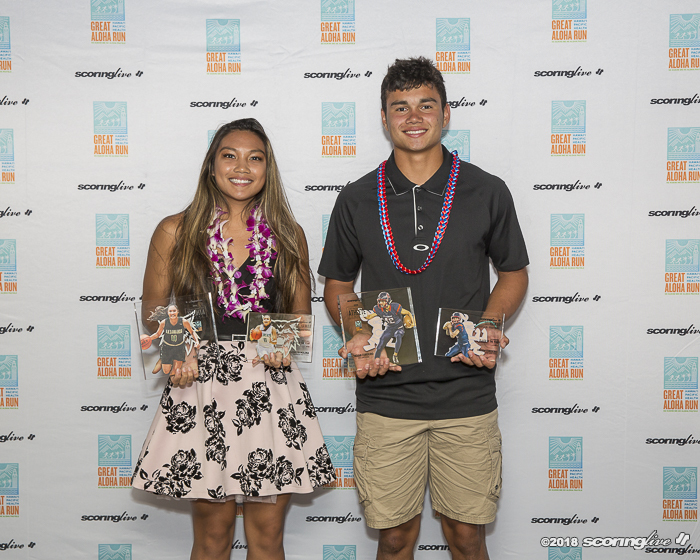 For both Cherilyn Molina and Chevan Cordeiro, the final games of their respective high school athletic careers ended in storybook fashion.

Molina, the Konawaena hoopster, and Cordeiro, the Saint Louis gunslinging field general, each led their teams — via second-half comebacks — to Division I state championships in two of the more memorable performances from the 2017-'18 prep sports season.

The accolades are plentiful for both student-athletes — including All-Hawaii Player of the Year honors in their respective sports — but they added another when they were recognized as ScoringLive's Distinguished Athlete Award winners at the annual dinner at Kapiolani Community College's Ohia Dining Hall on Saturday, May 19.

The award, now in its fifth year, recognizes one male and one female student-athlete for the most dominant single season in his or her respective sport.

Molina follows in the footsteps of older sister Chanelle, a back-to-back winner in 2015 and 2016.

It's the second straight year a Saint Louis quarterback was selected as the male recipient. Cordeiro's senior campaign — his first as the starting quarterback — followed that of Tua Tagovailoa's in the 2016-'17 year.

Despite a season that saw Cordeiro complete 67.2 percent of his passes for 3,157 yards with 29 touchdowns while leading the Crusaders to a perfect 10-0 record, stepping into what is arguably the most visible position in all of prep sports in Hawaii had its share of adversity.

"There were a lot of times during practice I would be mad and I just had to think to myself that I'm practicing against the best defense in the state and just practicing against them makes me get better. I just had to flush it down and just get better," Cordeiro said, who threw for 440 yards and three TDs in the Division I-Open Championship Game last November — including the game-winning score on a 53-yard scoring strike to Jonah Panoke with 37 seconds left.

Cordeiro spent two seasons as Tagovailoa's backup before taking over the reins this year.

"I'll say it was hard. You have to work hard where you're at right now, everyone in high school is good — especially in Hawaii — and you just gotta compete every day during practice to get better. I guess competing with my boys at Saint Louis made me a lot better," he added.

Cordeiro, who will join the University of Hawaii this fall, offered this when asked what he would tell himself as an incoming high school freshman: "Just have fun playing your sport. Whatever you do, just have fun. I know it's frustrating, but just keep working, work hard every day, in the weight room, in practice, at home, at school and just work hard and you can do a lot," Cordeiro said.

In the case of Molina, there was no need to bide time as an understudy. The four-year starter — and two-time league Player of the Year — took on an ever-increasing workload over the course of her impressive prep career.

The Wildcats went 48-0 in the Big Island Interscholastic Federation over Molina's four seasons and capped off each year with the Division I girls basketball state title.

Molina's competitive nature pushed her to continue to improve despite all of her success.

"I always felt like I was never good enough and I just kept pushing myself to be better, or be a better player, and I just kept working harder and harder and my work ethic, I get it from my mom, that and perseverance," Molina said.

"I want to give credit to my teammates because without them I wouldn't have been able to get this far," she said. "I feel like the value of high school sports is teamwork and communication because without those you can never win a game by yourself, without talking to your teammates and we all have to be on the same page and have the same goals."

Molina, who averaged 17.3 points while shooting 42.5 percent from the field in the state tournament, was instrumental in helping the Wildcats overcome a five-point halftime deficit to top-seeded Maryknoll in the state final last February.

Konawaena outscored Maryknoll by 20 points in the second half. Molina finished with 22 points, eight rebounds, three assists, two steals and one block and was named the tournament's Most Outstanding Player.

"I think the most important lesson I learned during high school would be mental toughness and confidence. Just having those then you'll get through anything. If you feel like giving up, just be confident," Molina said.

Molina, who will join sisters Chanelle and Celena at Washington State University next year, was also asked what she would tell herself four years ago.

"I would tell myself to be the best version of yourself. Just be positive and never let negativity get to you," she said.

Fortunately for us fans of prep sports, we got the best versions of both student-athletes this year.

Radford completes a perfect regular season for the first time since the 2015-16 season.